Since the launch of celebrated mobile money transfer service M-Pesa five years ago, Kenya has been labelled the ‘Silicon Savannah’ and an ‘ICT hub’ with its supposed technology revolution that has overshadowed other African countries. Yet, outside the tech-focused business incubation centres and conferences, many struggle to ‘feel’ the revolution. 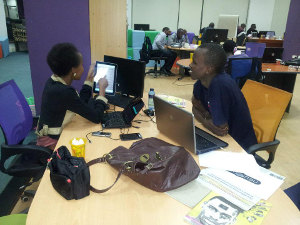 Nailab is a Nairobi-based business incubator that lowers entry barriers for young entrepreneurs to start and scale their tech ventures in Kenya. Picture: Nailab

In the last five years about half a dozen tech incubation hubs have sprouted in Nairobi, numerous ICT events and competitions have been held, and millions of dollars in grant funding has been released. Hundreds of young Kenyans have joined the technology bandwagon, building startups and creating all manner of M-stuff.

The government too is dancing to the tune, issuing grants and loans to startups, financing and organising stakeholder meetings and conferences, documenting policy and designing and investing in multi-billion dollar projects that it claims will make Kenya the ultimate ICT destination. One of the Kenyan administration’s flagship projects is the development of the US$10 billion Konza Technology City outside the capital Nairobi, which is expected to attract international investors.

The Silicon Savannah hype has been fuelled by the media, technology entrepreneurs, startups and the government. For a while it worked; investors flocked to the iHub, a co-working space that has become Kenya’s unofficial tech headquarters, but soon enough, they too began grumbling. Other than grants and donor funding, very little actual investment has been pumped into local technology startups. Investors say they can’t find investment-ready businesses in Silicon Savannah’s river of startups.

Many techies are hustling; juggling between a number of startups and building different kinds of apps, a lack of focus that investors have criticised with some describing it as a “turn-off”. Young techies attribute this restlessness to the fact that many are trying to create a “big thing” that will attract an investor. In the meantime, they have to put food on the table and fight off the temptation of taking up a better paying job at some NGO.

“Kenya’s is a case of wanting to get to the end before walking the road,” said Will Mutua, a developer and co-founder of technology information portal Afrinnovator.

“Developers want to build an app, put it on an app store and sell millions of that app on their first shot. Rovio Entertainment made 50 apps before they hit on Angry Birds,” Mutua added.

While many agree that Kenya indeed has potential, recent developments, including the decision to shut down Kenyan online business directory Mocality, is igniting debate on how big and established the Kenyan market is for technology products and online services.

At last month’s Mobile Web East Africa conference, some participants tore into the hype, with some suggesting that Kenya’s ICT sector had no business going by the “cute” title, Silicon Savannah.

One of the attendees, TMS Ruge, co-founder of Uganda-based incubation hub Hive Colab, proposed a change of name to perhaps, Digital Savannah.

“It is misleading. We don’t have the right to call ourselves the Silicon Savannah. We don’t produce silicon; unless you are branding us based on adoption of other people’s hardware. We are not manufacturers of anything, we are emulators at best and in a few ways we are innovators with things like M-Pesa and Ushahidi (an open source project which allows users to crowdsource crisis information). We need to go beyond hyping it with a cute name,” said Ruge.

But in addition to what Kenya’s technology revolution should be named, lies deeper concerns of over-ambition, impatience, lack of capacity and a culture that stifles entrepreneurship.

The success of under-30 US tech billionaires, like Facebook creator Mark Zuckerberg, is an inspiration to many young Kenyan techies. The idea that a bunch of university students can become billionaires in their 20s has spurred an enterprising spirit among the Kenyan youth. It is quite common to bump into university students and fresh IT graduates that have formed companies in partnership, most of whom frown upon the idea of employment.

But should every developer be an entrepreneur?

“Entrepreneurship has been romanticised,” said Mutua. “Success is not being a billionaire. When we see Mark Zuckerberg and (the late) Steve Jobs in the media, what we see is plastic. We do not see the work that goes behind the scenes. We don’t see the team, the effort put in project development and management. It is not up in our faces.”

Lino Carcoforo, managing partner of Innovation for Africa (I.4.A.), an investment company focused on technology startups in East Africa, observes that there are lots of stumbling blocks in the ecosystem.

“There is an air of ‘everyone can be an entrepreneur’. This is an environment that has not done the whole 360 degree cycle,” said Carcoforo.

Andrea Bohnstedt, an investment risk analyst and columnist wrote in a local Kenyan paper “Nairobi’s ‘Silicon Savannah’ is in desperate need of a large dose, not of money but of modesty.”

However, grand dreams are the order of the day in an industry where world acclaimed M-Pesa is the yardstick of success.

“From an investor point of view, M-Pesa is a curse in many ways; by killing off the creativity of a lot of these developers, by not thinking beyond mobile money. There can be other success stories but it doesn’t necessarily have to revolve around mobile money. You just have to look at what has made M-Pesa so successful then apply that to other things like jobs, health and education,” said Carcoforo.

Mobile money has inspired many apps and businesses, whether it is in aiding fundraising through M-Changa, helping businesses accept mobile payments with Kopo Kopo, or allowing users to track M-Pesa transactions via Zebumob.

Beyond mobile money, innovations have been made in just about everything from helping farmers access markets via M-Farm or simply playing games through Ma3racer.

The influx of grant money and competitions where entrepreneurs are awarded cash prizes, have also been called a curse because it encourages developers to build apps with a social impact, but with little commercial potential. Some stakeholders have argued that this could be a distraction from sustainable businesses that are needed to build a real ICT hub.

Going to conferences to pitch and win money, Mutua said, has become a business. According to Carcoforo, “free money from competitions will only hurt the industry”.

“Nairobi is like the NGO capital of East Africa. A lot of money coming in this industry is NGO driven. There is need for a particular change of mindset for us to sell the region as an investment destination as opposed to a grant destination. Until we replace NGOs with venture capital and angel investors, then can we call ourselves Silicon or Digital Savannah,” said Ruge.

Is the criticism justified?

Despite the criticism, there is no doubt that Kenya has made significant advances in technology. Success stories include software companies like Craft Silicon, which builds software for banks and other financial services companies in 44 countries, and Cellulant, which is currently implementing a $8.9 million contract in Nigeria that involves running an e-mobile registration and validation system for subsidised fertiliser.

Perhaps Kenya’s is just a case of people expecting too much too soon.

“I always wonder whether the tech pundits currently demonising the startups realise that the hype about Nairobi was never created by the so-called entrepreneurs (startups) but by the same tech pundits? From where I am sitting writing this, I asked myself who the hell told the world that Nairobi tech is booming in the first place if not the same pundits who have the columns in newspapers and blogs around the world?,” wrote Kennedy Kachwanya, a blogger and chairman of the Bloggers Association of Kenya (BAKE).

Mbwana Alliy, co-founder of Savannah Fund – an Africa focused technology venture capital fund – told How we made it in Africa in an earlier interview, that he expects to see failures in Kenya, but this is not a bad thing.

“I have seen failures in Silicon Valley all the time. Sometimes you fund an entrepreneur who has failed twice and they succeed a third time because they have learnt a lot. One thing we need to change in East Africa, is that there is no shame in failure,” said Alliy.

A case of over-emphasis on ICT?

Some have also questioned whether the obsession with technology could distract Kenya from other sectors that have equal, or more, potential.

Mutua argues that technology is not the only opportunity area in the East African nation.

“We need to do a strategic audit of Kenya. What are our strengths and weaknesses? Then look at areas we have potential and actual capacity to develop in those areas. It could be ICT, tourism, agriculture or manufacturing. It has to be a mixed basket. We can’t look at ICT only,” said Mutua.

To become a technology hub, Ruge advises that Kenya would need to build both software and hardware.

“When you create a system that is ingenious, and ties together software and hardware and solves a very particular local problem, then you become a hub. You cannot call yourself a hub when your hardware is being built outside the country,” said Ruge.

Despite the criticism and scrutiny, Kenya’s ICT industry is still attracting keen-to-learn, ambitious young techies and a new crop of skilled and experienced mentors that might just make the country a true tech hub after all.