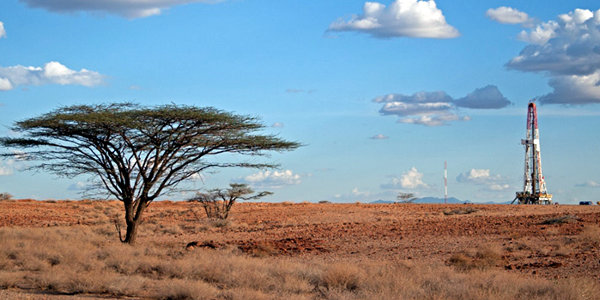 Back in 2012, the news of Kenya’s oil discovery spread fast. Stock markets roared, politicians gushed and the Twitterati tweeted. Fast forward to today: with $70 off oil prices and at least another four to five years to go until the first commercial production, one cannot help but ask, has Kenyan oil been overrated?

With a tip of the hat to Clint Eastwood, the prospects for Kenya’s oil wealth can be characterised as the Good, the Bad and the Ugly.

First, the Good: Timing. Oil prices may be low right now, but in the broad scheme of things the discoveries have come at a good time in Kenya’s course of development. Oil becomes a curse only when the institutions that prevent booms and busts and rent seeking, or that mediate any conflict, are weak or absent. As Kenya’s finance minister noted at the launch of the World Bank’s Kenya Country economic memorandum (CEM) last month, the country already has relatively strong institutions given its stage of development. Thus, the risk of oil becoming a curse because of too early a discovery, which happened elsewhere in Africa (think Angola or Nigeria), is relatively low.

Second, the Bad: Size. With a cumulative discovery of only 600m barrels, Kenya’s discovered reserves are small. They rank Kenya at a mere 47th position worldwide, just ahead of Uzbekistan. In contrast, in 2012, Saudi Arabia produced about 11.5m barrels per day. At that rate, all of Kenya’s reserves would be depleted in just 52 days, while the Saudis will keep producing for 60 more years. And no, that’s not a typo. It is 52 days and 60 years, respectively! On the other hand, one man’s pocket money is another man’s riches. Although Kenya’s discoveries are small, their impact on fiscal revenues is not. Indeed, at peak production, we estimate fiscal revenues generated from oil to be about US$9bn annually. To put that in context, $9bn is about 16% of Kenya’s 2013 GDP. It is enough to cover the cost of the Standard Gauge Railway line from Mombasa to Nairobi. A fistful of dollars, $9bn is not.

Third, the Ugly: Conflict. Discovered reserves are in the poorest, historically marginalised county of Turkana, where literacy rates are among the lowest and poverty rates, at over 90%, the highest. This obviously feeds into grievances. In addition, the area is already prone to the Turkana–Pokot conflict, which oil may exacerbate. So, managing expectations, particularly around how revenues should be shared, becomes all the more critical.

Putting these factors together, how exciting is Kenya’s oil discovery? It depends on what Kenyans do from now on. Most oil-related equipment is imported, and oil sector jobs will be gone once construction is completed and the pipeline is laid and buried underground. This underscores a pivotal policy point: the main impact of oil on the economy is not through the temporary boom from pipeline construction. Instead, it is through the fiscal revenues that oil generates in royalties and taxes, and how they are used.

For the Kenya CEM report, we built a “dynamic stochastic general equilibrium model,” the technical name of a (rather complicated) economic model, which we tailored to Kenya’s economy and brought down to a level of granularity to answer three important questions. First, should the Kenyan government save or spend its oil revenues? Second, which sectors should it most spend on: health, infrastructure or education? And third, what should implementation mechanisms look like?

On the first, the short answer is that Kenya has space to both save and spend. In contrast to purists who propose that all oil revenues be saved for future generations, we propose that some should be spent as well. After all, why shouldn’t the current generation benefit? But we also find that Kenya should save much more than it should spend in order to make sure that the money is not wasted. To be more specific, roughly a quarter of oil revenues should be spent initially.

On the second, given the features of Kenya’s economy (for example, an underperforming public investment management system), spending should not just be on physical infrastructure but also on human capital, notably health and education.

And finally, on the third, implementation, two mechanisms are paramount: designing a sovereign wealth fund, following a rule-based framework to prevent political interference, and managing expectations around oil revenue-sharing at three levels: intra-county (within Turkana); inter-county (Turkana and other counties); and between Turkana and the national government.

Are these arguments overly cautious? Perhaps yes, but for a good reason. The figure below provides a tale of three oil producing countries: Malaysia, Republic of Congo, and Angola. All three started oil production in the 1960s. But it was only Malaysia that quadrupled its GDP per capita by attracting foreign investors, investing oil revenues in productive, non-oil parts of the economy, and ensuring everybody benefited from its oil wealth. In contrast, Angola and Congo suffered for so long in corruption and civil wars, to which oil wealth contributed directly or indirectly. So, this cautionary tale of three countries is a sobering reminder that oil is not always necessary or sufficient for development. 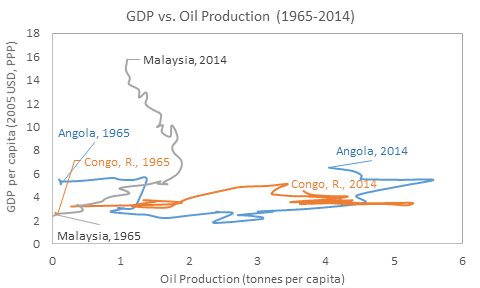 To paraphrase Clint Eastwood, the world has seen so much oil wasted so badly. With some forethought and planning, Kenya’s oil wealth need not suffer the same fate.