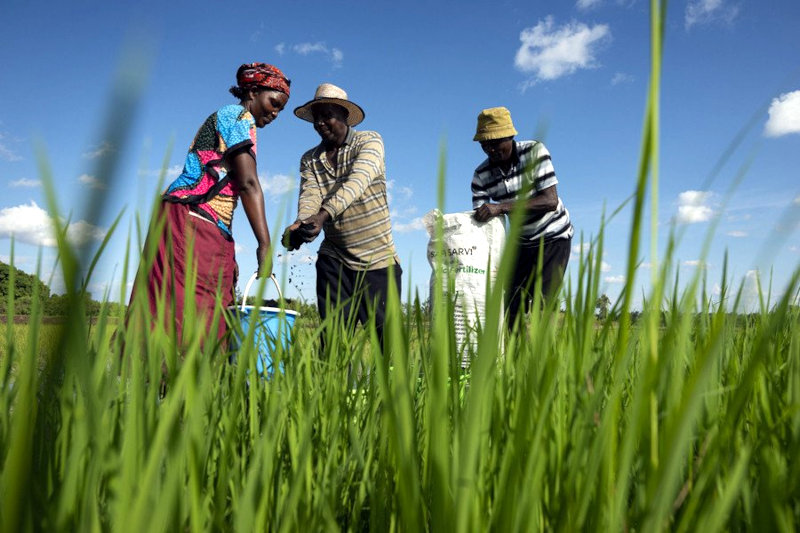 Most commercial fertiliser travels a long way before it reaches rural farmers in Kenya. Transportation costs force many farmers to rely on cheap, synthetic fertilisers, which can lead to the acidification and degradation of their soil over time.

The situation amounts to a multigenerational crisis as elders have watched their crop yields dwindle over the course of decades.

Now Safi Organics is using a technology honed at MIT’s D-Lab to make organic fertiliser that can help restore such farmlands. The fertiliser is made locally using the residue from crops after harvest.

Safi buys crop residue like rice husks from the farmers and processes it nearby before selling it back to farmers at competitive prices. The company says its fertiliser has been shown to reduce the acidification of soil and increase crop yields by up to 30% after a single planting cycle.

That’s a life-changing increase for farmers who rely on their crops to survive. Farmers have used the additional crop sales to feed their families, send their children to school, and gain financial independence.

“Safi is decentralising fertiliser production such that it can be carried out in rural villages for the first time,” Safi co-founder and chief technology officer Kevin Kung says.

The company has been working with farmers in Kenya since 2015. More than 5,000 farmers have purchased Safi Organics’ fertiliser to date. Kung says those farmers have reported a total increase of $800,000 in earnings from increased crop yields.

Now Safi is seeking to bring its model to India and other parts of sub-Saharan Africa.

By the end of 2012, Kung had spent upward of three years on a research project to turn organic waste like crop residue from villages in Africa into charcoal for cooking fuel. Over the course of those efforts, Kung received support from the Priscilla King Gray Public Service Fellowship, the MIT Tata Center, the MIT Legatum Center, and the MIT IDEAS Social Innovation Challenge programme.

Unfortunately, a series of failed pilot projects left him searching for a sustainable business model as his team of MIT students slowly disbanded. So Kung decided to use some of his funding to travel to Kenya in the summer of 2013 and partner with a local collaborator.

After making a job description, he was contacted by an agribusiness manager named Samuel Rigu. With Kung’s PhD work ongoing, he hired Rigu to run operations in Kenya as he returned to MIT at the end of the summer.

Rigu learned that the charcoal they were making could also be used as fertiliser for growing crops if combined with other nutrients. The epiphany paved the way for localised fertiliser production that would offer advantages over the high cost of imported synthetic fertilisers.

Rigu knew the downside of cheap, synthetic fertilisers well: He’d grown up in a poor rural farming community and remembered his grandmother weeping as she spoke about the family’s land gradually losing its vitality.

Kung was sceptical about producing fertiliser, but Rigu convinced him to try out the idea with a small group of farmers. When harvest season came, some of the farmers using the formulation nearly doubled their yields (pH tests later showed the fertiliser helped combat the acidification caused by other farming techniques). Rigu and Kung watched with amazement as the extra income set off ripple effects in the community: Impoverished farmers used the extra funds to send their children to school and further improve their farms.

The founders decided to set up a company selling the soil formulation. They called it Safi Organics. In 2018, Kung received a grant from MIT’s Abdul Latif Jameel Water and Food Systems Lab (J-WAFS) to further the technology involved in Safi’s operations.

Today each of Safi’s production facilities can profitably provide fertiliser for thousands of farmers up to 20 miles away. Additionally, because Safi’s biochar is rich in inert carbon, when it’s used as fertiliser, it is sequestering carbon from the atmosphere.

Meanwhile, Kung’s PhD evolved into a project to build low-cost, portable biomass conversion systems to be deployed in rural areas like the small farms Safi works with. He says his involvement with Safi helped keep his PhD work relevant to real-world challenges.

“[Safi] started as a MIT project,” Kung says. “But we had to learn how to engage local partners and recognise that sometimes they are going to become the champions of these initiatives, not necessarily us, and they’ll have the final say in the direction of things.”

This year Safi’s team is hoping to bring its model to other parts of the world where rural farmers are overpaying for cheap fertilisers. The company is beginning studies in Tanzania and Uganda to see if local partners can stand up sustainable businesses on their own. The model is also being replicated by another group in India with farmers in northern Punjab, who have different types of crop residue to process.

For Kung, Safi’s success has shown the value of empowering local partners to make business decisions for the communities they know so well.

“I was initially pretty sceptical of the entire idea [of pivoting to fertiliser],” Kung says. “I didn’t think it was feasible. But the local team really proved me wrong and has validated the improved yield and the impact on farmers. For me, it’s been an inspiring journey.”

This article was originally published by the World Economic Forum in collaboration with MIT News.