Dr Manu Chandaria is one of Kenya’s most prominent industrialists. Chandaria is the chairman of Comcraft Group, an industrial conglomerate which was estimated to be worth US$2.5bn by Forbes magazine in 2011. The group is involved in the production of steel, plastic and aluminium products and has operations in 50 countries across the globe. 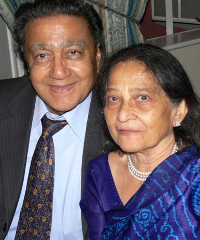 Manu Chandaria, chairman of Comcraft Group, and his wife Aruna

Chandaria, alongside other family members, has overseen the growth of the conglomerate from a small business started by his parents and other relatives in 1915. When Chandaria, his brother and two cousins returned to Kenya in the 1950s after pursuing their education in the US and India, they had to choose between joining the “very small” family business or taking up employment elsewhere.

“We were very small when I came down to work. We had lost a lot of our wealth,” said Chandaria. “[We wondered] should we really work for a little setup or we should we find comfortable jobs – nine to five, a car and driver standing outside and we would be okay. I had graduated with master’s in engineering [which] very few people had then.”

Chandaria’s father and other relatives had set up Kaluworks, a company that manufactured aluminium cookware. When Chandaria returned to Kenya, the company employed 40 people, five of whom were family members.

“We kept on thinking that our parents must have suffered and sacrificed, because they built from nothing; zero to something. They came here because there was not enough to eat. My father could not read, speak or write English [and] my mother was illiterate.”

Chandaria, his brother and cousins opted to stay in the family business because their parents had gone to great lengths to send them overseas to receive quality education. All their lives, Chandaria said, his parents worked hard to change their status “from a poor family, from a middle grade family to something that we could aspire for”.

“We could not shatter their dreams,” Chandaria recalls. “We said: ‘Close your eyes and let’s get on with the work.’ In the first five years we created 500 jobs. By 1958, we had 800 people working [with us]. We have prospered because it was a strong drive by educated people, seeing a vision ahead of them. Our decision [to join the family business] was right.”

Tanzania’s declaration of independence marked a new era for the family business. Sir Ernest Vasey, who was chairman of the family’s companies, was instrumental in expanding the business. According to Chandaria, the Englishman asked for nothing more than a “small house, a car, a driver and a very small salary”. But his advice was invaluable.

He warned the Chandaria’s that as more African countries gained independence, Kenya would follow suit, investors would flock to the country and eventually the family businesses would lose market share.

“His advice was to go out. He told us: ‘If you want to survive, you can’t rely on one country.’ So, some family members went to Uganda, some to Tanzania, some to Ethiopia [and] some to Zambia. In five years time, in 1965, we were in six countries (including Burundi). We found ourselves with much more capacity that what we thought.”