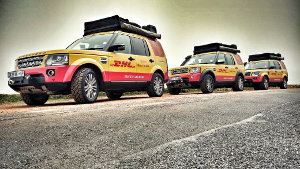 A team sponsored by DHL have just embarked on a grand and ambitious journey through 45 African countries, starting in Cape Town and ending in London in September 2015.

Forming part of the build up to Rugby World Cup 2015 in England, the DHL Africa as One tour will see the team pass a single rugby ball from hand to hand while introducing the African continent to the game of Rugby.

As part of this epic campaign, the team from DHL, the official logistics partner of Rugby World Cup 2015, will be driving across Africa in three Land Rover Discoveries, while capturing every step of the journey, every person, every place and every pass on film, in photographs and words, and then sharing this content with Africa and the world.

The seven-strong team left Cape Town this week and will be on the road for the next 11 months, engaging in various rugby and corporate responsibility activities. This journey in itself will be a test of endurance and commitment, with the team having to face challenges from all quarters, including terrain, security, health and safety.

According to Charles Brewer, Managing Director for DHL Express Sub Saharan Africa, the campaign highlights DHL’s continuous commitment to investing in the African continent. “The journey will see us delivering the game of rugby and what it represents, across Africa. More importantly, on a continent synonymous with the game of soccer, we aim to unearth a keen interest in the global sport of rugby.

“Africa As One is also about making an impact in Africa. In addition to the rugby fairs in cities and rugby clinics in local communities, we will be distributing over half a million units of stationery to young children across Africa and providing free eye tests for thousands of people across Africa through our partnership with Mercy Ships,” adds Sumesh Rahavendra, Head of Marketing for DHL Express Africa.

“We are present in all the African markets and our investment in this continent is unparalleled. Africa As One is another way for us to demonstrate our faith in Africa and celebrate her potential,” says Rahavendra.

He adds that through ongoing sponsorships, such as their partnership with DHL Western Province and the DHL Stormers, the company remains committed to the development of rugby in South Africa. “However, we feel that there is also significant untapped rugby interest beyond South Africa’s borders and are confident that, as a result of this campaign and journey, the game of rugby will be embraced by the continent and the future for rugby in Africa will be great,” concludes Rahavendra.