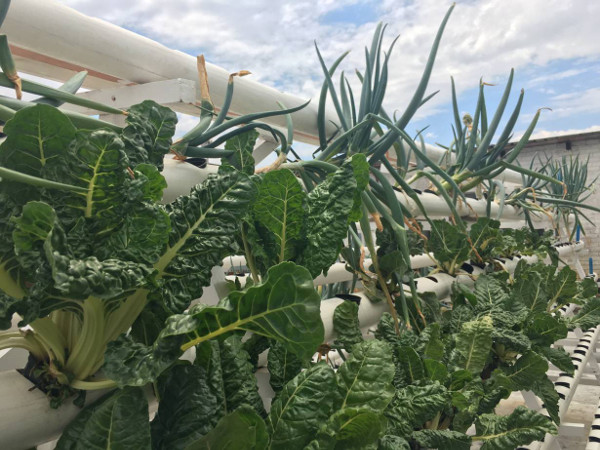 Spring onion, chard and other vegetables grow in the rooftop garden of one of Johannesburg’s social housing skyscrapers, set up by social enterprise Rooftop Roots. Photo: Thomson Reuters Foundation/Inna Lazareva

The soaring “Chamber of Mines” building in central Johannesburg, a hub for South Africa’s mining industry, is a symbol of a bygone era when pioneers began flocking here in the late 19th century to dig for gold.

Today, it is also the site of a new venture aiming to entice the city’s unemployed youth into green entrepreneurship.

The action this time is happening not underground but sprouting from the rooftops of the inner city’s iconic skyscrapers.

The initiative to create urban gardening businesses on vacant roofs was launched more than a year and a half ago by the public-private Johannesburg Inner City Partnership.

Farming is hardly the first thing that comes to mind as a source of job creation and entrepreneurship, said Brendon Martens of Wouldn’t It Be Cool (WIBC), an innovation incubator leading the effort.

“Agriculture is generally seen as a low-tech, bottom of the pyramid-type activity when it’s at the small scale. It’s what a single mom does just to make ends meet,” he told the Thomson Reuters Foundation.

But Martens and his team are striving to turn the concept on its head by bringing market needs together with cutting-edge farming methods and hands-on business training.

The initiative uses hydroponics technology, which allows basil, lettuces, spring onions and other crops to be grown in special water solutions without requiring soil or large open spaces.

Here plants grow faster and use up to 80% less water than in traditional farming. The technique also eliminates problems like soil erosion.

Another advantage is that crops are grown locally, cutting down on transportation time and costs, and delivering the freshest-possible products to the consumer.

That is a big shift given as much as 80% of what is on offer at the Johannesburg fresh produce market, Africa’s largest, is imported from outside Gauteng province, said Martens.

“We pull that value into the communities in the inner city that really need it,” he said.

The farm atop the Chamber of Mines, where neat rows of plants bloom under plastic high above the traffic buzzing below, began operating in September. 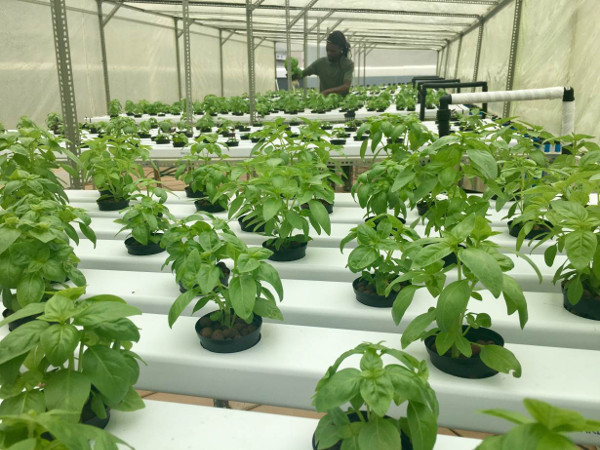 Agripreneur Nhlanhla Mpati tends to his plants in the garden he set up on top of Johannesburg’s iconic “Chamber of Mines” building in the city’s central business district, South Africa. Photo: Thomson Reuters Foundation/Inna Lazareva

It is already generating a profit, said Nhlanhla Mpati, 29, the “agripreneur” – agricultural entrepreneur – in charge.

Skills learned here can be applied in other places too, he said, inspecting a small pot of lush green basil.

“With hydro-technology, you’re not just employing people, you’re giving them a specific trade and a specific skill. They take that and use it somewhere else,” he said.

In the next three years, about 100 more farms will be set up in the city besides the two now running, and the scheme is already attracting many applications from would-be young entrepreneurs.

Those shortlisted will receive business and technology training.

Ten of the best performers will each be allocated a rooftop farm of at least 100 square metres (1,076 square feet) with about 3,600 plants.

The farmer will pay back a percentage of the total turnover, which will be used to fund the next farm.

Building owners are asked not to charge rent for the first year, but after that they can earn an income from their roof.

“You’re creating a perpetual cycle of sustainability. The farmer’s sustainable, the project is sustainable – until we run out of buildings,” said Martens. 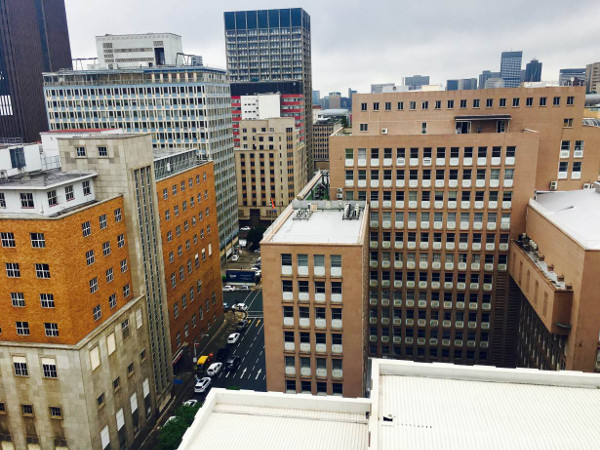 View from the top of the “Chamber of Mines” building in the central business district of Johannesburg, South Africa. Photo: Thomson Reuters Foundation/Inna Lazareva

One of the initiative’s main aims is to address the problem of mass youth unemployment in the city and beyond.

South Africa’s jobless rate is close to 30%, but that rises to nearly 40% for those aged between 15 and 34, one of the highest percentages in the world.

In Johannesburg, young people beg for money as they weave between cars in traffic jams. Unemployment is also fuelling high crime rates, with some zones virtual no-go areas after dark.

“It’s a ticking time bomb,” said Martens. “We need to address that issue in a sustainable way.”

“Hunger is a real issue here,” he said. “The legacy of apartheid and its effects are still felt today… You have kids struggling to afford school.”

Mokgoko seeks to sell rooftop produce at affordable rates to locals who might otherwise not be able to buy fresh food.

City roof gardening “kills two birds with one stone – you provide food security and you provide jobs for people”, he said.

Some experts, however, doubt the potential of urban farming beyond meeting immediate hand-to-mouth needs.

Most farmers do not have enough support, land, technology or capital to reduce poverty on a large scale, said Naudé Malan, an expert on urban agriculture at the University of Johannesburg.

But urban gardens using hydroponics and aquaponics, and run with entrepreneurial vision do very well, generating an income that beats the median wage, he added.

The key to success lies in the shorter and more efficient production and distribution process, he said.

Growing crops in the city cuts down on food miles – the distance food is transported from producer to consumer – and fosters a new retail approach, linking farmers and shoppers directly, Malan said.

And hydroponics requires far less water than normal irrigation – important in a country that suffers from chronic water shortages.

Tending his plants on the Chamber of Mines, Mpati said the rooftop business is ripe for expansion – from using urban gardens for fashion shows and art exhibitions, to tourist trails.

“It’s about being innovative and disruptive in the space,” he said. “That’s why I say that within five years (the farmers) should be millionaires.”

Inna Lazareva is a journalist and analyst based in Cameroon, covering Central, West and East Africa. This article was originally published by the Thomson Reuters Foundation.