Kenyan Isis Nyong’o is an investor in Africa’s technology space and a well-known name in the industry. Until recently she was the managing director of Africa for InMobi, an international mobile advertising network. Prior to InMobi, Nyong’o worked in senior management positions at MyJobsEye, a job site in Kenya, and she specialised in mobile and local content partnerships at Google. She also led MTV Network’s commercial entry into Africa and holds degrees from Stanford University and the Harvard Business School, where she was president of the Africa Business Club. 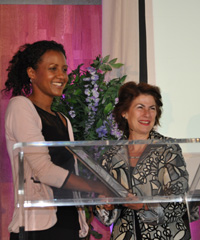 At the launch of the inaugural WIE Africa (which stands for Women, Inspiration and Enterprise) last month, Isis Nyong’o (left) was recognised for being one of Africa’s women leaders who is positively shaping the future of the continent.

How we made it in Africa asked Nyong’o to tell us a bit more about being an investor in Africa’s technology space.

When it comes to investing in the technology space in Africa, what companies, start-ups and people do you tend to invest in?

I’m always on the lookout for start-ups which have gained traction with end-users and are focused on learning. The space is in such a nascent stage so I’d be concerned about anyone who is convinced they have it all figured out. The team composition is incredibly important but equally important are teams who know what gaps they have [and] how they can address them. In addition to angel investing, I focus my advisory time with start-ups that reflect [this] and work with a network of investors who may be looking for something different, so it’s always useful to engage with new ventures.

Do investors, like yourself, still have opportunities in Africa’s current climate to make big returns off their investments in the technology industry?

The past decade has been primarily about ‘fixing the basics’ needed for Africa’s information technology-related industries of the future to flourish. This involved massive investment by both the private and public sector in core infrastructure that has enabled us to enjoy near-ubiquitous mobile coverage and 3G/broadband internet access in some major cities today. While the core infrastructure we have in place today is by no means equal across countries nor within countries, we have already started to see the impact it’s had in the past few years on accelerating the pace of innovation. This is reflected in the emergence of mobile products that have changed lives, mushrooming of tech hubs, regional expansion of leading global and local technology firms and material changes in our leading institutions of learning. Now that these leading indicators have emerged, we see capital in various forms starts to chase these opportunities.

I see the next decade being defined by ‘fixing the big problems’ now that we have the basic tools to do so. Given this view, the potential is enormous for entrepreneurs and investors who can collectively leverage technology to address the key problems faced by a historically underserviced market of one billion plus people. This smart device-equipped market will on average be richer, younger and healthier than our societies are today and their demands will be far greater than we can even begin to predict.

What are some of the risks facing tech investors in Africa? What steps can be taken to overcome or reduce these risks?

There are risks with any investment and every investor needs to understand their risk appetite. Within the African context I can mention four risk areas perhaps unique to tech investors on the continent over the next decade. First, there is a real risk of the ‘growth inhibitors’ that can be primarily bucketed under infrastructure-related inhibitors. If, for example, we fail to solve the electricity challenges, there will be a limit on the addressable market for products and service if devices can’t be recharged reliably and cost-effectively.

Second, there is a real talent gap for this industry and if we’re not able to solve how to develop the necessary skills quickly enough, we again risk limiting the potential of the businesses being invested in. Third, the regulatory environment is critical and as the internet grows in relevance, I’d anticipate that regulators will do what they are tasked to do – which can sometimes lead to a conducive climate for innovation such as the case with M-Pesa in Kenya but can also have adverse affects limiting creativity. Finally, the relative illiquidity of African markets today means that exit options for investments are more limited than other regions.

In your opinion, why do you think that there are so few women heading technology-focused companies in Africa today?

To set the context, it’s useful to look at global trends on the gender leadership gap issue. Very few countries, companies and institutions have women at the helm. It’s certainly not a challenge unique to Africa or to [the] continent’s tech industry. Depending how one defines it, the ‘tech industry’ is relatively young and we don’t have a lot of hard facts on the composition of the leadership teams especially in private companies. Thus, we tend to work off of a ‘gut feeling’ that since we don’t see as many women in the public eye, then they must not be there. It’s been my experience that while the CEO level roles are certainly dominated by men, many large telcos, SMEs and start-ups do have women in other leadership roles. They fly below the radar, in a sense.

What steps do you think need to be taken to increase the presence of women in Africa’s tech industry?

As a member of New Faces New Voices, an Africa women’s leadership network with an active Kenya chapter, I’m working with other women leaders to raise the visibility and voices of accomplished women across industries, including tech. Since the tech industry is in its infancy in Africa, the rules can be redrawn both by women and by institutions. Women who are interested in exploring a career in tech should strive to seek out any opportunity to learn, gain experience and contribute. I’d encourage everyone keen on shaping our continent’s future to focus more on what they can contribute individually and collectively than on perceived status quo such as imbalance of men and women. Institutions can take concrete ‘expose, educate, equalise’ steps from exposing girls from as early as primary school level to what careers in tech look like right through to tertiary level; proactively educating more women into science, technology, engineering and mathematics degrees through scholarships/internships and then equalising work environments by creating more female friendly offices and policies to minimise the penalties many women pay today for advancing in environments skewed towards male success.