“AGOA has generated good will for the United States, and our friendly suggestion is that good will is worth building on.” 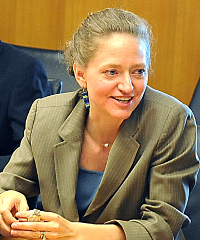 Erica J. Barks-Ruggles, US Consular General in Cape Town, says there has been lobbying by some powerful US industries to remove South Africa from AGOA.

This was said on Monday by South African Minister of Trade and Industry Rob Davies to urge the US Congress to renew the African Growth and Opportunity Act (AGOA), which expires next year.

AGOA is a preferential trade programme that was enacted in 2000 to boost and diversify African trade with the US. The act allows duty-free entry for a wide range of African products into the US. Close to 40 sub-Saharan African countries are beneficiaries of AGOA.

While AGOA has been extended twice already, it is now set to expire in 2015 and it is uncertain whether it will be renewed again. The US-Africa Leaders Summit held in Washington next week is expected to address the topic of AGOA’s extension as well as some key concerns surrounding the Act, such as the need to diversify African exports to the US. Close to 90% of African exports that enter the US under AGOA are petroleum products.

During a roundtable discussion at the UCT Graduate School of Business in Cape Town on Monday, a number of experts exchanged thoughts concerning the future of AGOA. One of the key topics discussed was the possibility of South Africa’s exclusion and what this would mean for the country, and the continent in general.

There has been discontent expressed among some US congressmen about renewing South Africa’s inclusion in AGOA. According to Erica J. Barks-Ruggles, US Consular General in Cape Town, this is mostly due to South Africa being perceived as a middle-income country, which some argue should not be benefiting from AGOA’s non-reciprocal preferences.

Barks-Ruggles noted that 98.9% of these South African products exported to the US were quota and duty free under the AGOA and Most Favoured Nation (MFN) status.

However, some powerful industries in the US want these benefits reciprocated. She explained there has been lobbying by key US industries to remove South Africa from AGOA due to what they deem as unfair trade practices by South Africa.

“This is where I think South Africa needs to be very alert because it is a middle-income country, it’s not a least developed country, and there are some tariff and non-tariff barriers to trade that have mightily upset some of our very powerful industries, including our poultry, beef and pork industry. South Africa is the only country in the world that prohibits – through tariff and non-tariff barriers – to trade imports of all three major meat products from the United States, which is a huge problem.”

She added that her administration supports South Africa’s inclusion in AGOA and has been working closely with the South African Department of Agriculture, Forestry and Fisheries (DAFF) and the Department of Trade and Industry (DTI) to negotiate ways to get rid of some of these concerns expressed by US industries.

“But we are not there yet and we are committed to continuing to work on this to try and remove some of those issues, so they don’t become larger problems for South Africa.”

AGOA is a unilateral provision which means the US determines annually whether countries have met the eligibility requirements set out in legislation. Beneficiary status of sub-Saharan African countries might be granted, or withdrawn, at the discretion of the US President and beneficiary countries have no recourse to dispute settlement in this regard. Eligibility status include conditions that government policies and practices promote democracy and market openness. Last month Swaziland was excluded from AGOA due to violation of terms with regard to worker rights.

According to Joshua Setipa, former CEO of Lesotho National Development Corporation, this unpredictability has been a source of criticism of AGOA and will likely be discussed at the summit next week in Washington, alongside the need for longer term extensions of AGOA to allow adequate time for investment planning and decisions.

“While I understand that the US has every right to decide who to trade with and under what conditions, if I’m a leader of a country in Africa, I would be worried. Because any minor misunderstanding means those benefits are withdrawn, and there goes investment. So we need to try find ways to try make it as predictable as it can be.”

Chris Wood, researcher with the economic diplomacy programme at the South African Institute of International Affairs (SAIIA), said he does not believe South Africa will be excluded from AGOA.

“I think its more of a bargaining position that has been put in place to try and get some concessions on poultry, beef, pork imports to try and appease the lobbies that are pushing hard for better access into the South African market. So I don’t think South Africa will be excluded but it is a possibility.”

However, he added if South Africa was shut out from AGOA, it would not just negatively affect South Africa, but would also harm the rest of the continent. For starters, it could be damaging to regional trade and deprive other African countries from benefitting from South Africa’s more advanced economy, such as its manufacturing sector.

“For example with leather being manufactured in Botswana or Namibia which comes to South Africa and gets put into our car manufacturing. Now if our car manufacturers lose access to the US market, that doesn’t just hurt South Africa, that hurts our neighbours that provide us with these important inputs into the value chain,” explained Wood.

“So really we need to be thinking about Africa as being interconnected, as being tied together in value chains that invariably end with our most advanced economies like South Africa and Nigeria. Those are the final production centres that need to have access to the markets, perhaps more than any others, to benefit the rest of the continent.”