Farmers in northern Ethiopia are struggling under the impact of climate change. Until a few years ago farmers in this hot and dry area could at least count on the occasional moderate rain. These days there is either no rainfall or it is in the form of torrential downpours leading to flash floods. 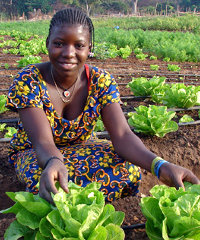 Irrigation has the potential to improve farming productivity in Africa.

Waldu Gebramaskel plants fruit, millet, wheat and maize. He told Germany’s DW-TV that because of the climatic changes in northern Ethiopia, many farmers in the area sold their land and moved to the cities. Gebramaskel, however, wants to stay. There is a reservoir close to his land that has the potential to irrigate his crops. The problem is that the water currently doesn’t reach the fields.

A German-Israeli team, supported by the Ethiopian government, has started a project to show farmers how to irrigate their fields more efficiently. With the help of the local farmers, they have established a pilot project utilising drip irrigation to irrigate vegetables. The scheme uses conduits that convey water from the reservoir to a tank next to the field. Farmers also received training on how to determine how much water their crops need. The idea is that the project will lead to greater adoption of the drip irrigation technology in other parts of the country.

Irrigation has a proven potential to boost levels of agricultural productivity on the continent, as well as address the effects of climate change. Africa is, however, dramatically underserved in terms of irrigation. A 2009 research report by the International Food Policy Research Institute (IFPRI) states that African countries irrigate only about 6% of their collective cropland, compared with a world average of 18%. In sub-Saharan Africa, only 4% of farmland is under irrigation.

“The low coverage of irrigation technology and the slow rate of growth in coverage clearly represent a lost opportunity for Africa and a tremendous potential for future investment and policy effort,” said IFPRI.

The report also found that African countries produce 38% of their crops (by value) from cultivated land on which water is managed, suggesting that additional investment in irrigation would pay large benefits. The disproportionate contribution to agricultural production of Africa’s small irrigated area suggests that returns on additional investment in irrigation would be high, both in terms of greater food security for the continent and greater production of export-quality agricultural goods.

Drought and unpredictable rainfall patterns caused by climate change increases the need for irrigation. McKinsey & Company notes that even before global warming was a problem, many parts of Africa were particularly affected by droughts, heat waves and floods. As climate change becomes more of an issue, African agriculture will increasingly suffer because of unusual weather.

India’s Jain Irrigation recently concluded a deal with Rwanda to develop irrigation solutions for smallholder farmers. After a meeting with Rwandan Prime Minister Bernard Makuza, the company said in a statement that its goal in Africa, and Rwanda in particular, is to help farmers establish a culture of using water efficiently and to introduce irrigation technology adapted for local needs. Makuza commented that Rwanda has significant wealth of water but has not exploited this sufficiently for it to become a source of development for the country.

Other irrigation firm’s such as Israel’s Netafim; South Africa’s Senter 360, Agriplas and Bosal House of Irrigation; as well as the US-based Lindsay are all eyeing opportunities on the continent.

In addition to bringing new areas under irrigation, potential also exists to upgrade current systems operating at less than optimal levels or that have fallen into disrepair.

Irrigation is only one of the capital investments and inputs that Africa needs to boost agricultural productivity. Others include fertiliser, advanced seed technology, postharvest processing facilities, and access to markets. However, irrigation stands out strongly among these because of its role in stabilising yields in the face of climatic variability, which has increased notably in recent times and is projected to increase further under almost all future climate change scenarios.

Back in Ethiopia, Waldu Gebramaskel needs about €250 to establish his own irrigation system – an amount he expects to raise from about two to three harvests. With the new system, he hopes to boost his output, and therefore his sales. “I’m very happy, because now we will be free from famine and drought. We won’t have problems if the rain doesn’t come,” he said.