Investors focused on Africa say Nigeria offers huge opportunities, but also huge challenges. The continent’s most populous nation is dogged by a deadly insurgency, what promise to be contentious elections and low oil prices. But some investors say the country’s economic picture is fairly promising. 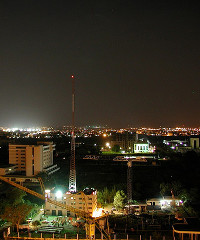 Africa’s most populous nation has its fair share of attractions for investment, as well as challenges.

Africa’s most populous nation has its fair share of issues. The army is battling a Boko Haram insurgency that has rendered parts of its northeast a no-go zone. The nation will hold hotly contested elections at the end of the month, which were delayed six weeks due to security concerns. And the economy is still largely dependent on a volatile resource, oil.

But even that grim picture can not compete with the sheer numbers. Nigeria’s population is estimated at 170 million people, its middle class is growing rapidly, and a recent re-evaluation of the nation’s economy vaulted it above South Africa. In a more meaningful indicator, the World Bank says Nigeria’s per-capita GDP is steadily rising, to its current level of about US$3,000.

Investment analyst Martyn Davies, CEO of Frontier Advisory, said this makes the West African nation a “no-brainer” for some investors – particularly those looking at the nation’s burgeoning consumer base.

“There has been an incredible interest, particularly in multinational South African capital, in going to Nigeria. And largely into the fast-moving consumer goods (FMCG) sector. So particularly for consumer-facing enterprises, Nigeria has been almost a no-brainer. One hundred seventy-odd million people. One in five Africans, almost, is Nigerian,” said Davies.

Despite the attractive numbers, doing business in Nigeria is tough for even savvy companies. Upmarket South African retailer Woolworths pulled out of Nigeria in 2013 after just two years, citing high rents and flagging sales.

Sub-Saharan Africa managing director for for ratings agency Standard & Poor, Konrad Reuss, said Nigeria still had a double B-minus rating, putting it below the threshold to be considered an investment destination.

Reuss said the headlines did affect the rating and the agency was “holding its breath” as elections approach.

“I have to highlight that we have the rating on ‘watch negative’ at the moment, because of a number of things that are obviously happening in Nigeria,” he said.

But, Reuss added, Nigeria also showed promise. “It is a diverse, very vibrant economy with very strong, very impressive entrepreneurs in Nigeria that run businesses that are super-successful. So yes, there are many positive things to say about Nigeria.”

“What we are doing now is not for the short term, it is very much a long-term investment. I think if one looks back and draws parallels to the Brazilian motor industry of 20 years ago, where Brazil was very much where Nigeria was probably 20 years ago, from an automotive point of view, today you have an automotive industry that is thriving with production excess of three million vehicles, and also becoming a big exporter of vehicles,” he said.

It is an exciting prospect, investors say – much like this exciting, ever-changing nation. But success in Nigeria may require a virtue that today’s fast-moving market is not known for – patience. – VOA