Highs and lows come with the territory when investing in Africa – these extremes present opportunities to contrarian investors. Nick Ndiritu, a portfolio manager for Allan Gray’s Africa ex-SA Equity Fund and Africa ex-SA Bond Fund, explains where to look, even when things seem to be falling apart.

In 1958, a little-known Nigerian writer named Chinua Achebe wrote a ground-breaking novel about his country that often seems prophetic. Things Fall Apart introduces us to the unfamiliar world of a traditional African village in the 1890s, but the storyline has universal resonance. A flawed protagonist, who is successful in his enterprise, struggles to reconcile the old and new ways of life. Context matters. The critically acclaimed book was one of the earliest narratives told from the perspective of African experiences, using the language of folklore and oral traditions passed down through the generations. This contrasted with the dominant image of Africa at the time, largely shaped by the writings of sojourners dating back to the mid-sixteenth century – Africa was at best a fantasy world of romance and nostalgia, and at worst, the antithesis of civilisation.

In today’s monetary tale, Nigeria hasn’t escaped Achebe’s metaphor of Things Fall Apart. Nigeria has come full circle from a favourite investor destination to prevailing negative sentiment over its economic direction. Low oil prices have exposed the cracks in a house built on petrodollars. The Central Bank has introduced capital controls to avoid further currency devaluation. Many investors are uncomfortable with the uncertainty. Some emerging and frontier market funds, experiencing significant capital outflows, are forced sellers of Nigerian equities. Nigeria’s All Share Index is down 43% in US dollars since the collapse in oil prices, while sovereign spreads on US$-denominated bonds due in 2021 have widened by over 400 basis points.

An environment of widespread fear appears ripe for bargain hunters. Nigerian consumer companies had become buy-and-hold growth stocks trading on lofty valuations before oil prices collapsed. While these companies have recently re-rated, we struggle to justify the implied growth assumptions. On the other hand, valuations for Nigerian banks are extrapolating catastrophe into the foreseeable future. Therein lies opportunity.

Emerging middle-class consumer at a crossroads

Multinational consumer companies such as Heineken, Diageo, Nestlé and Unilever have been lured into expanding their presence in Nigeria by the prospect of a vibrant emerging middle class. Over the last 15 years, seven publicly listed subsidiaries of multinationals operating in Nigeria have invested about US$4bn into the Nigerian economy. Their aggregate capital expenditure (capex) started to pick-up in 2008 and about two-thirds of the capex has been invested in the last seven years.

Capex spend goes into purchasing productive assets to maintain existing operations, improve efficiencies or expand capacity. A pick-up in capex is normally an indicator that companies may have underinvested in the previous cycle or are investing in anticipation of favourable growth prospects. Judging from the capex pattern, during the initial pick-up in capex from about 2008 to 2011, companies expanded capacity to fulfil a ‘real’ supply gap. Consequently, these private sector capex investments contributed to the country’s high GDP growth rates, alongside higher public sector spending driven by rising oil prices. The positive feedback loop of a growing non-oil economy and rising per capita incomes was seen as further evidence of the market opportunity for consumer goods. This optimism was captured by The Economist’s December 2011 ‘Africa Rising’ cover note: “Since The Economist regrettably labelled Africa ‘the hopeless continent’ a decade ago, a profound change has taken hold.”

Since 2011, the subsequent phase of capex spend has generated lower returns for shareholders. Graph 1 shows the returns on capital invested, calculated by dividing earnings before interest, taxes, depreciation and amortisation (EBITDA) by the total capital invested (equity and debt). There are a number of factors contributing to lower rates of return. 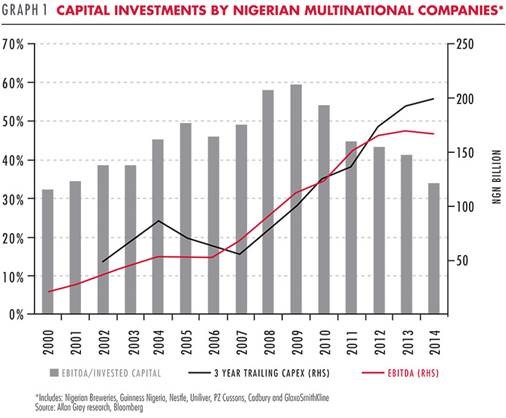 Firstly, the allure of a growing middle class, combined with the era of cheap external funding, induced new entrants and existing local competitors to build too much capacity. Competition limits price increases and forces companies to spend more on marketing and distribution, which lowers margins. Secondly, as Nestlé has admitted, companies overestimated the rise of the middle class. The initial fast-paced growth, which came after a previous cycle of underinvestment, is going to be harder to replicate. It will be a gradual process for the ’emerging middle-class consumer’ to change her traditional consumption patterns and start the day with a branded box of breakfast cereal. Today’s crossroads between the old and new ways of life are often seen by the roadsides, or in large open-air markets, in a country where modern retail trade accounts for only about 10% of sales. In these settings, a cash-strapped small-scale retailer or trader prefers to buy and stock the products they have sold before, often eschewing new products.

An environment of accelerated sector-wide capital investments bodes well for sellers of capital equipment but not for stock market investors – especially if, as we believe, valuations are already discounting high growth expectations. We are willing to wait indefinitely when our assessment of intrinsic value is below market expectations.

We have no exposure to the large Nigerian consumer stocks but we have been increasing our overall exposure to Nigerian equities significantly. We are no less aware of the challenges that Nigeria faces and our approach isn’t blind optimism. Rather, we are focused on individual companies and we rigorously scrutinise their ability to weather the storms. We are invested in Seplat, a Nigerian oil company with good cash flows and a robust balance sheet in an out-of-favour sector that is ripe for acquisitions. We have also increased our holdings in select Nigerian banks.

However, in contrast to the consumer stocks, the news flow on Nigerian banks over the last five years has almost always been bad. Nigeria’s unorthodox monetary policy has come at the cost of profitability of the banking sector. Over the last five years, the Central Bank has maintained the monetary policy rate at around 12% to 13%, but aggressively adjusted the cash reserve ratio (CRR). This is a specified minimum of total deposits held as cash reserve at the Central Bank earning zero interest, and has the effect of tightening monetary policy by draining liquidity from the banking sector. At the end of 2010, Nigeria had a uniform CRR equal to 4% of total deposits. This was hiked to 8% in 2011 and to 12% in 2012. By 2013, the Central Bank made a distinction and imposed a 50% CRR on public sector deposits and maintained 12% CRR on private sector deposits. This was increased again in 2014, and by the end of the year stood at 75% and 15%. Earlier this year, the Central Bank set a uniform rate of 31%.

You get the picture – travelling down a rocky and unpredictable regulatory path unnerves most investors. However, despite the CRR and other recent regulatory constraints, the profitability of top Nigerian banks has been remarkably resilient, as shown in Graph 2. In part, it is a story of sector consolidation and the strong banks capturing a bigger part of the growing pie. Competition has reduced from over 150 banks in the 1940s to 89 by 2004 and 21 banks currently. Further, after the 2008/2009 banking crisis, there has been a ‘flight to quality’, with depositors moving their funds from the perceived weaker banks to top banks. For these leading franchises, their market share of industry deposits has increased from around 20% in 2001 to over 50% in 2014. We believe these top banks have attractive long-term prospects in a nascent banking market (banking assets/GDP equal to less than 15%), and are attractively priced at 1.1 times book value and 5.3 times earnings. Banks are a proxy for the macroeconomic uncertainty and our Nigerian holdings have impacted negatively on our recent performance. We do not have extraordinary insights into when the underlying fundamental challenges will be resolved. But the early signals are encouraging: a new government appears determined to improve efficiency in the oil sector and nudge industry to reduce import dependency. 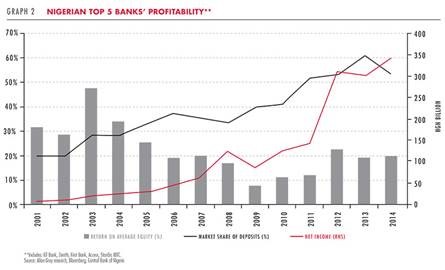 Our long-term, rational view, based on bottom-up analysis of value, can uncover opportunities even more so in frontier markets, where investors switch between extremes of fear and greed. In a memorable passage from Things Fall Apart, agrarian villagers faced by a locust swarm in Achebe’s fictionalised village of Umuofia turn the threat into a great feast after roasting and drying the insects like their ancestors had done. Achebe’s ancestors knew the virtue of patience and that even a grim situation can bear great opportunity.