Can Kenya have its own McDonald’s? That is the question Dominic Kosen (42) grappled with five years ago. Kosen, a hotelier by profession who had served 15 years in employment, is the founder of Kula Korner, one of Kenya’s first local restaurant franchises. He sat down with How we made it in Africa‘s Regina Ekiru to talk about running a franchise business in Kenya. 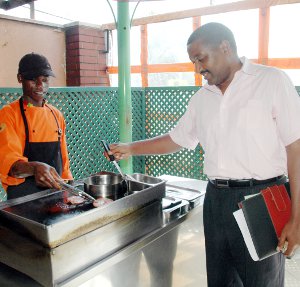 Dominic Kosen inspects a meal being prepared by one of his chefs.

Tell us more about Kula Korner?

I would describe it as an African bistro-style of restaurant with a western flair going by the slogan Chakula Tamu Bei Bora (Swahili for Delicious food at an affordable price). Our menu is characterised by natural, wholesome and wholegrain African dishes. I subscribe to the school of thought that as Africans we are better off with our own food. With all the negative impacts of junk food, a healthy lifestyle is the way to go. We operate as a franchise business. So far we have five franchisees operating in Narok, Kakamega, Nakuru, Kajiado and Nairobi.

Why did you opt for a franchise model?

It is no secret that up to 80% of business start-ups fail in the first year of business. This is partly because the entrepreneurs use trial and error methods that land them in the valley of death. Being a franchisee comes with the benefit of using a tried and tested method that is more likely to succeed. I strongly believe franchising is the way to go in the future. Being a franchise gives us stronger bargaining power compared to operating as different entities. We have struck deals with several companies where we access services at a subsidised cost.

Beginning this year we will be undertaking the construction as well as equip a restaurant and sell it as a ready-made package to interested entrepreneurs. We have realised that instead of telling someone to start with brick and mortar it would be easier to hand them the key so they can start operations immediately, hustle free. Such an arrangement would cost anything from Ksh.3.5 million (US$43,000)

In Kenya there is a clear lack of education and knowledge on franchise businesses. Furthermore, no one had attempted to roll out a franchise outside Nairobi, so we have been travelling down unfamiliar territories. 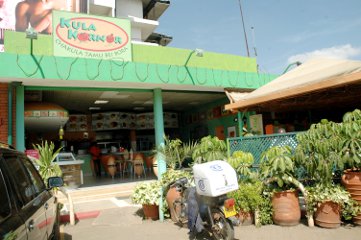 The outside of a Kula Korner restaurant

What is the secret behind the success of Kula Korner?

We owe it to our management style and our strong brand. Brands sell. You can die with a good concept because no one knows about it. We believe in growing our brand. We have outsourced all services and focused on the franchise.

Why did you decide to start your own business?

When you are an entrepreneur certain forces keep telling you, you can do it, take the risk. I had a persistent urge to start my own restaurant. I wanted to venture into new grounds. My dream was to establish a McDonald’s-style franchise restaurant, only it would instead specialise in healthy foods. Through savings and borrowings I injected capital of about Ksh.2 million ($25,000) and started operations.

Any advice for other entrepreneurs?

One of the lessons I have learnt in entrepreneurship is that giving up is not an option. You have to be resilient. Having good knowledge of what you are doing is important. It is also important to believe in your inner strength. All of us have something we can do better than anyone else in the world. Don’t suppress this gift. Get out of the comfort zone.

What’s next on the horizon for Kula Korner?

We would like to roll out the Kula Korner brand to every part of the country in the next five years. Plans to unveil e-food services using M-Pesa is also in the pipeline.

Though we have received requests to roll out in Tanzania and Uganda, we have turned down such offers since we do not yet have the capacity to handle the expansion. However, in the next ten years we are looking at becoming an African franchise. Challenges will be there, but challenges are there to be overcome. I say without a doubt that Kula Korner is headed to becoming a respected brand in the region.