Africa’s growing mobile and internet penetration has inspired innovative services aimed at improving agricultural productivity by giving farmers easier access to expertise and information on everything from weather and market access to pest control. 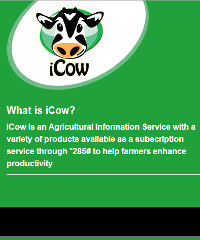 iCow is a Kenyan online and mobile platform that aids farmers.

Such innovations have had a considerable impact on improving yields and increasing incomes of small-scale and subsistence farmers. However, scaling up of existing mobile and internet services targeted at farmers has been difficult. A recent report attributes this to a shortage of technical skills.

According to the report published by The McKinsey Global Institute (MGI), penetration of smartphones and tablets among African farmers remains low, thus limiting many of the projects to basic mobile platforms and text messaging.

“This will change over time, but the short-term solution is to adopt a multiplatform approach that places primacy on SMS messaging to achieve maximum product recognition, scale and impact while developing applications that can work on more sophisticated devices as smartphone and tablet penetration grows in the future.”

The McKinsey report calls for government funding of internet-powered agricultural services and innovation in the private sector to create new revenue streams by including other services, such as warehousing and logistics, micro-financing, insurance or market information. It estimates that the internet could accelerate efforts to increase agricultural output by producing up to US$3bn in annual productivity gains in the sector.

The report cites innovations such as Nigeria’s e-wallet programme which has made distribution of fertiliser subsidies more efficient and eliminated corruption. Farmers receive subsidy vouchers on their mobile phones which they redeem at the nearest dealer.

“Under the old system for distributing government subsidies for fertiliser, only 11% of farmers actually benefited, and huge sums were lost due to corruption,” says the report, adding that the e-wallet programme launched in 2012 has already achieved major savings, expanded the number of farmers served, and exceeded its production targets.

The report says iCow, an agricultural platform developed for small dairy farmers with online and mobile phone-based information and educational videos has been credited with increasing milk production by 30% among its users in Kenya. Telephone-based initiatives like Uganda’s Farmers Call Centre provide farmers with expertise on topics such as crops, livestock, weather, market information and input suppliers.

Services like Esoko, which provides weekly advisory services to farmers in many African countries through mobile phones, enabling them to negotiate better prices and choose different markets, has generated better prices for produce and livestock.

“There is tremendous potential to scale such interventions as internet penetration and usage grow, although initiatives that increase price transparency and match buyers and sellers may fall afoul of existing laws governing competition. This regulation may need to be modernised to allow for aggregation and sharing of data.”

The report explains that existing agricultural exchanges could grow in scale, sophistication and impact as they go online, adding that internet-based agricultural platforms have the potential to drive up demand for web access, and thus support infrastructure rollout in rural areas.

“Africa’s ICT sector is rapidly evolving, with positive ripple effects on investment and innovation. The challenge will be to harness and sustain this early momentum. If governments and the private sector work together to build the right foundations, the internet could contribute up to $300bn to Africa’s GDP by 2025 — all while driving economic and social progress that can have a profound effect on the lives of Africans across all socioeconomic groups.”