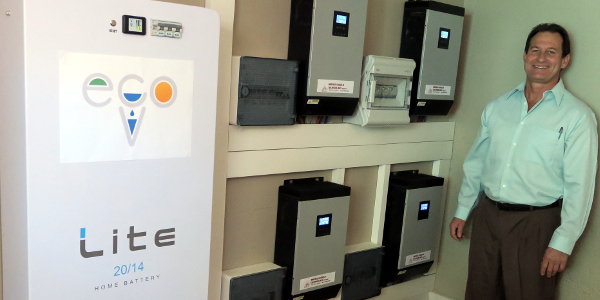 South African innovator André Nel is the man behind Green Tower, which offers households and businesses an off-grid water heating and air-conditioning solar-powered solution which can save around 90% in electricity consumption.

Currently only around one-third of Africans have access to grid-connected electricity and the International Energy Association estimates that sub-Saharan Africa will need an additional US$450bn in power sector investments by 2040 to reduce outages by half and achieve universal access to electricity in urban areas.

The challenge is huge and has caught the attention of a number of innovators. Among these is South African electrical engineer André Nel, who witnessed South Africa’s recent “load shedding” crisis where the country faced frequent and scheduled power outages. He is the founder of Eco-V, a company focused on energy-efficient and off-grid solutions. Its Green Tower innovation offers households and businesses a solar-powered heating and air conditioning solution that can save consumers around 90% in electricity consumption. According to Nel, water heating and air conditioning account for the majority of electricity costs in homes and office blocks.

While solar heating is nothing new, Nel’s Green Tower improves the efficiency of a solar heat pump with solar thermal collectors, low pressure storage tanks and heat exchangers. And he estimates that households who invest in the solution will see returns within three years.

Nel has been nominated for this year’s Innovation Prize for Africa for his work on Green Tower and, while it was only patented at the end of last year, business is already starting to pick up.

“We are currently busy with negotiations to do 1,000 homes for a big property developer in Pretoria and we are also in negotiations to do 200 RDP homes (homes constructed under the government’s Reconstruction and Development Programme) in the Northern Cape using our technology.”

But it is in the rest of the continent that Nel sees the most opportunity. For example, in Zimbabwe the government announced a ban on electrical geysers to reduce energy consumption in the country which is plagued by blackouts. The plan is to phase out electrical heaters over the next five years and Reuters quoted Zimbabwe’s Energy Minister Samuel Undenge as saying solar water heaters will become mandatory in every new house before they can be connected to the grid.

And then there is the growth of Africa’s middle class which is demanding improved standards of living.

“Although it’s very slow, it’s not negligible – there is growth,” highlights Nel. “And what a growing middle class translates into is an increase in requirements in terms of better housing, better infrastructure and so on.”

He adds that his company has already been approached by a contractor which is planning to develop middle-class housing estates in a number of African markets.

“And because of the energy problems in Africa their requirement is an off-grid solution. So they have already identified our solution and we are negotiating with them.”

From idea to commercialisation

Nel says he has learnt there is a specific method to commercialising technology, and advises other African innovators to first look into validating their product and proving its performance specifications.

“And then you also need to partner with the right people. You should find a managing board so that your team is more than one person.”

Lastly, Nel encourages others to ensure their innovations become more visible by entering as many competitions and innovation challenges as possible.

“We have done a number of competitions over the past three years and actually won some challenges.”

These include winning the Swedish Smart Living Challenge in 2014 and being named first runner up in the Green Economy category at the Gauteng Accelerator Programme Innovation Competitions for 2014, which came with an incubation opportunity at the The Innovation Hub as well as a grant.

“Having that supportive environment helps and I think this is the most important lesson learnt. You need a structure, more than one person involved and you must find ways of validating your technology and becoming visible.”