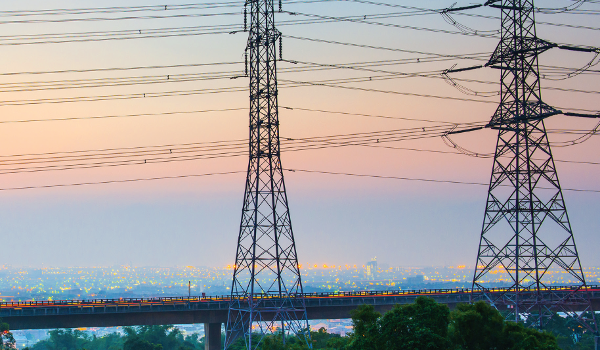 As African economies evolve, the services sector is growing as a proportion of these economies, and electricity is a non-negotiable ingredient for businesses in this sector to operate efficiently.

Across Africa, a stable and well-priced electricity supply goes hand in hand with creating an environment in which the benefits of a technology-lead industrial revolution can be fully reaped.

In most parts of the world, access to reliable and reasonably-priced electricity would be considered a standard part of a well-functioning economy. But for many Africans this has, historically, not been the case. If the continent is to benefit from what has been termed the fourth industrial revolution, a stable and reasonably-priced electricity supply will be central to enabling African economies to leapfrog some of the development paths which developed economies have taken in the past.

As African economies evolve, the services sector is growing as a proportion of these economies, and electricity is a non-negotiable ingredient for businesses in this sector to operate efficiently. Without a stable supply these businesses must juggle the logistics of having to generate electricity on site using expensive fuel. Ultimately this impacts on the bottom line and hampers economic growth.

Across the continent, governments are focused on improving the electricity generation deficit that has held back their economies and has been highly detrimental to the development of small- and medium-sized enterprises in the light manufacturing sector.

The East African region case study is of particular interest as it has experienced enormous growth in the electricity sector, especially from renewable resources. In Ethiopia, the Grand Ethiopian Renaissance Dam is expected to start producing electricity later this year. Over time this dam (the biggest hydro-electric scheme in Africa) will generate more than 6,000MW of power and increase Ethiopia’s generating capacity fourfold. Ethiopia has announced further schemes and the government hopes to increase capacity to more than 17,000MW by 2020. This is probably too ambitious, but it is clear that the country will have the capacity to export some electricity to the region as its internal demand will not keep up with the increased supply.

Staying in East Africa, Kenya’s state-controlled and listed generation company, Kengen, is also adding substantial geothermal generating capacity. As Kenya doubles its electricity capacity – expected to be roughly 3,200MW by 2020 – most of the new additions will be from geothermal energy, with some wind and hydroelectric. This will mean that more than 80% of Kenya’s electricity will be generated via renewable resources with less reliability on its current small-scale hydroelectric schemes that are subject to interruptions caused by frequent droughts.

Not only must electricity be produced but it also needs to be transmitted to specific locations based on demand and then distributed to individual users. This is an area of significant focus across Africa and there have been some innovative public-private partnerships set up to improve electricity distribution and connect more individuals and businesses to the grid. Umeme, a listed company in Uganda, is an example of a partnership that has worked well. By guaranteeing that the company will achieve a return on the investments it makes in the infrastructure, but ensuring that it achieves key metrics of loss reduction and collections, the tariff has actually reduced over time. Examples such as Umeme highlight that investments can more than be recovered through reduced losses and better collections, which results in more users being connected and paying less.

Technology is also playing its part and most new connections across the continent are using prepaid smart meters that significantly improve collection rates and reduce meter-reading costs for utility companies. Kenya’s electricity transmission and distribution company is currently spending more than 40% of its revenue on improving the electricity grid. As this continues the system losses that are currently more than 20% should be reduced, thereby allowing for lower tariffs.

Not only must electricity be available and stable, it must also be affordable for the users and allow them to be globally competitive. Tariffs for industrial users in Uganda and Kenya in 2016 were US$0.11/kWh and $0.12/kWh respectively and this compares favourably to the average $0.11/kWh to industrial users in the Eurozone last year. Electricity prices in Ethiopia are currently subsidised and are below $0.10/kWh. As the electricity transmission and distribution losses are reduced these should come down further still. The tariff for industrial users in Uganda for 2017 is already lower than in 2016, at $0.10/kWh.

Most of the new generating capacity in East Africa also produces cheaper electricity. This improved mix will also result in lower average production costs with further benefits to tariffs.

Ultimately, however, a sound electricity grid must be sustainable in the long term. To assess this, the World Economic Forum analyses energy systems and publishes the Energy Architecture Performance Index (EAPI) for each country. This allows governments and observers to track the movement towards more sustainable, affordable and secure energy systems around the world. When it comes to electricity, the measurements focus on the price industries have to pay as well as the level (electrification rate) and quality of access to electricity. To measure the sustainability of energy supply, the ratio of low-carbon fuels to the total mix is a key input. As we have seen across most of East Africa, there is increased generation of renewable (low-carbon) electricity. Kenya has moved four positions up the ranking table of EAPI since 2009, an indication of improved electricity supply and access as well the nature of the generation.

Although for developed countries electricity has never been regarded as a disruptor, for many African businesses, which have suffered expensive and unreliable electricity supply, this improved position can be a game changer. What is particularly noteworthy is that these improvements can be achieved without an increased cost to the consumer, so long as the correct policies and partnerships are put in place and supported by government will and private-sector participation.

The accompanying graph shows the US Energy Information Agency’s (EIA) estimates of the levelised cost for producing electricity using different technologies. This is the present value of the unit cost of electricity taken over the lifespan of the generating asset. It represents the per-kilowatt-hour cost (in discounted real US dollars) of building and operating a generating plant over an assumed financial life and duty cycle. 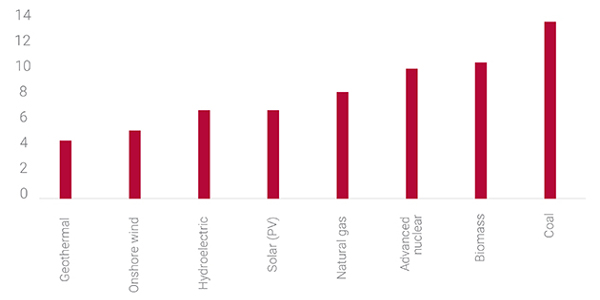 ​This measure is particularly important when comparing the cost of renewable energy to other technologies since, although the ongoing generating costs are very low, the initial capital outlay is substantial (building a dam for example).

This assessment shows that many renewable energy options are now considerably cheaper than those using fossil fuels, with geothermal proving the least expensive.