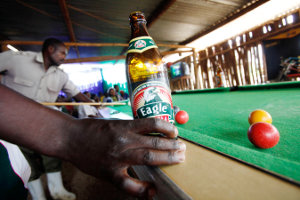 Beer producers could benefit from a rise in consumer spending.

The report categorises Africa’s consumers into six income groups that define their spending and behaviour.

“The majority of the African population find themselves in the first three income brackets, either living off basic staple foods, starting to buy cheap processed food, or forming part of the emerging middle class,” states the report.

As incomes increase, people will start tending to previously neglected dietary needs, such as eating more. The research highlights that at a certain point on the income spectrum, food consumption will start to shift from quantity to quality foods, such as including more meat in the diet and switching to better brands. “Further along the income spectrum, consumers will start adding luxury food products – from ice cream to caviar – to their diets,” notes the report.

As more than half of the sub-Saharan Africa population falls in the lowest income category, consumption of branded alcoholic drinks is low as there is “very little discretionary income available after the very basic needs have been met,” says the report.

However, with increasing incomes, there is huge potential in the alcoholic beverages market, especially for the beer industry.

When it comes to expenditure on luxury goods, the report states that poor infrastructure in low income countries decreases availability and affordability of luxury products. At present, Africa’s lowest income level spends nothing to very little on luxury items.

The report states that the market for household appliances is still in its infancy in sub-Saharan Africa due to low income levels. However, because income levels in North Africa is generally much higher than in the rest of the continent, there is more interest from international retailers in this appliance market.

“With the exception of South Africa and a number of countries in North Africa, most African countries do not have well developed auto industries, and in fact, African governments and non-governmental organisations tend to be the principal buyers of vehicles,” highlights the report. “Although the situation is expected to change, it might still take a long time for vehicle purchases by Africans to increase significantly…”