Nearly two-thirds of Tanzania’s population of 49 million reside in rural areas, with less than 5% of these households having access to electricity. For the rest, alternative forms of energy such as paraffin, charcoal and firewood are used. 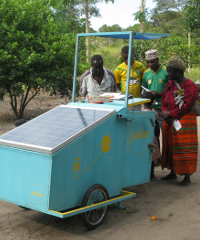 The Juabar kiosk is a mobile, light-blue, small wagon, almost similar to what is used by ice-cream vendors. It can charge up to 20 phones at a time and costs Juabar about US$600 to install.

However, many households own at least one mobile phone, even in the most remote villages. As of 2014, Tanzania had a mobile penetration rate of 63%. Yet for most of these households, charging a mobile phone can be challenging. This is a problem two US entrepreneurs want to solve.

In 2012 Olivia Nava and Sachi DeCou teamed up to introduce solar-powered kiosks that charge mobile phones in off-grid areas of Tanzania. Their company Juabar (Swahili for solar bar) has built a franchise network of micro-business owners who offer phone charging services.

The Juabar kiosk is a mobile, light-blue, small wagon, almost similar to what is used by ice-cream vendors. It can charge up to 20 phones at a time and costs Juabar about US$600 to install.

“It’s a very easy business and doesn’t require renting a building. We have a couple of locations where the business is so [strong] that we have put in larger installations,” says DeCou.

The franchisees, called “Juapreneurs”, receive financing, technical support and sales training. According to DeCou, they decided to use a franchising model to overcome logistical challenges of operating in remote areas in a country spanning over 945,000km² – about the size of Denmark, the UK, France, Ireland and the Netherlands combined.

“We also wanted them to operate as entrepreneurs, not as workers in the system,” she continues.

“Our entrepreneurs know what customers in their areas want and need. So when we leverage that from a business perspective it becomes interesting and beneficial for them, their communities and to us.”

Juabar selects “Juapreneurs” based on their location, who are then vetted and offered training. They charge between 300 and 500 Tanzanian shillings ($0.16 to $0.26) to charge one phone, and are at liberty to set prices based on market dynamics. In return, they pay a monthly fee of 80,000 Tanzanian shillings ($43.50) to operate the kiosk as franchisees.

“We don’t work with anyone who is in a location where they can’t make double what they pay us because we don’t want them to be in a position where they are giving us more than they are making,” adds DeCou.

“I am from the US and most people there ask how we can take such a lot of money from people here. The interesting thing is that some of our entrepreneurs make up to three times what they pay us.”

When she started Juabar, DeCou and her team were told no one would buy the installation because they would be too expensive for locals to afford. Contrary to this, Juabar managed to sell a number of kits.

However, DeCou says they decided to change the model from selling to leasing so as to create a network of entrepreneurs they could work with long-term.

“People also thought the leasing model wouldn’t work in Tanzania. We were warned that franchisees would disappear with our kits. We thought about it a lot in the beginning and it was a big concern. But no one has ever run away with any of our kiosks,” she emphasises.

“We vet the people we work with, we know where they are and we have good relationships with them. In future we will put tracking devices in the kits.”

One potential risk for Juabar could be a rural electrification project undertaken by the Tanzanian government’s Rural Energy Agency (REA) whose mandate is to connect rural communities. For instance, in 2013 REA earmarked 360 villages in the country where electrification was to be implemented.

However, DeCou says grid expansion is not something for Juabar to “worry” about now.

“Most of the areas we work in are probably not going to be electrified any time soon. But if it happens all of a sudden that would change the demand for what we do. In some cases it would mean that we just move the business somewhere else, and in other cases we would offer other services at a community level beyond charging phones.”

As smartphone usage increases, DeCou says there will be opportunities to offer additional services such as Wi-Fi access, information and media centres, as well as solar-powered grain mills at the community level.