In many countries children detest mathematics, and most record poor performances in the subject. Generally, maths and science scores lag behind other school subjects. 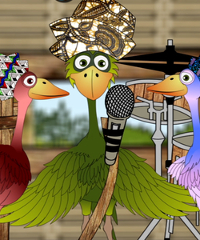 But a Tanzania social enterprise is changing perceptions by helping children in East Africa improve their understanding of the subject through an interactive educational cartoon show that combines mathematical concepts with fun animated and catchy songs.

The series is based on three kids – Kibena, Kiduchu, and Koba – who attempt to solve problems in their community using their maths skills. The three get help from talking, and singing, animal friends namely, Mama Ndege (a maths whizz bird), Uncle T (a rapping giraffe), and Da Chura (a frog who explains important vocabulary).

The edu-cartoon series airs every weekend on the national TV station TBC, and across the region via Chinese Pay TV company, Star Times.

“Maths is seen by many children as a boring, hard subject. This attitude has a lot to do with how teachers teach maths. We wanted to make it cool and easier to understand,” says Cleng’a Ng’atigwa, co-founder of Ubongo Media.

The Tanzanian artiste started working on the concept a few years ago after studying animation at a local college. He partnered with a maths teacher to produce one animated story that was viewed by children in his community. When he met Thai-American documentary filmmaker, Nisha Ligon, they decided to set up Ubongo and scale their reach to a wider audience.

So far the show has reached 1.5 million viewers. Every Saturday about 600,000 watch the show in Tanzania.

“Our research shows there is a 4% improvement in maths among kids who watch compared with those who don’t,” says Doreen Kessy, chief operations officer at Ubongo Media.

The company makes revenues from corporate sponsorships, licensing to broadcasters and SMS interaction with kids.

“We also realise the potential in licensing characters’ rights. For instance, Mama Ndege is very popular. We could make money by giving licences to companies that would want to use those characters,” says Kessy.

Now in its second season, Ubongo Kids is tackling science subjects in addition to maths.

The challenge of bureaucracy

Kessy says Ubongo receives positive feedback from children and parents with demands for longer episodes. However, doing business in Tanzania is “not easy,” she adds.

“There is a lot of corruption and bureaucracy. For example, children have been asking for Ubongo Kids DVDs. So we manufactured DVDs in Thailand because it was more affordable. We shipped 10,000 copies and they arrived at the port last August.

“They are just being released right now, six months later, because of bureaucracy. Obviously we will never do that again. It has been a time-consuming process with people asking for bribes every step of the way.”

Ubongo Media sees growth potential for its cartoon series across the continent.

“We now have Ubongo Kids in Swahili and English available to viewers in East Africa. And we intend taking the English version across the continent. There are 440 million children in Africa and we are bringing them a fun new way to learn. And that opens the door to a future of digital learning,” says Kessy.

The company is also developing a new edutainment show targeted at learners aged seven and below. It will focus on teaching English as a second language.