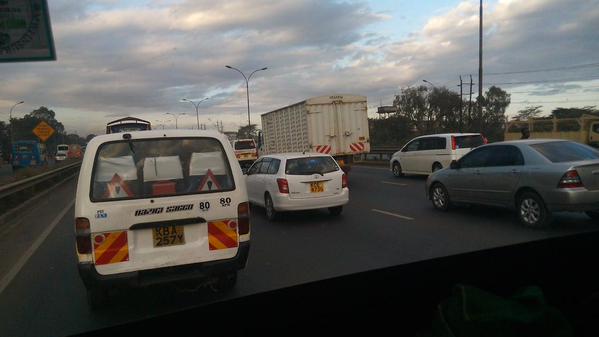 A picture of Nairobi traffic submitted by a user of the Ma3Route service.

How to end Nairobi’s notorious traffic congestion is a million-dollar debate. It is estimated the Kenyan capital, which ranks among the most congested cities in the world, loses Ksh.37bn (US$357m) annually in fuel consumption, pollution and lost productivity due to endless traffic jams.

There have been many attempts to fix the problem such as construction of new highways, the launch of a commuter rail service and elimination of some roundabouts, but with little success. For example, a recent study revealed just 1% of Nairobi residents use trains daily, despite government spending more than Ksh.400m ($3.9m) on a commuter rail project.

More solutions are in the pipeline, including a Ksh.58bn ($559m) cable car project and a planned Ksh.100bn ($964m) road and rail mass rapid transit system.

But in the meantime, Nairobi residents have to make do with the city’s limited infrastructure coming under strain from a rapidly growing population and an increasing number of cars.

One solution commuters use to navigate traffic is Ma3Route, a platform that crowdsources traffic data. Ma3Route enables commuters to share and access information on the state of traffic flow, road conditions and even accidents.

“It helps people make decisions on which roads not to take,” says Stéphane Eboko, chief revenue officer at Ma3Route. “We have built a community where people talk to each other and trust the information shared. They are using text and landmarks to navigate [traffic] as opposed to maps, which is really vital in cities where not all roads are named.”

Ma3Route was founded in 2012 by tech entrepreneur Laban Okune. According to Eboko, the platform currently has more than 300,000 daily users engaging on its website, social media accounts and mobile app.

Using simple text and photographs, users share their frustrations and random observations. Social media site Twitter is its most popular platform for users seeking to make reports or navigate traffic.

“Twitter works well for us because commuters don’t really need anything fancy, just a message and a photo that helps them decide whether or not to use a particular route,” explains Eboko.

Ma3Route generates income from advertising pushed to its users and SMS subscriptions delivered in partnership with a local telecommunications company.

“There are 20,000 people in Nairobi who receive SMS notifications two or more times a day depending on their preference,” says Eboko. “Another revenue stream is data. We have a lot of information on where people go, how they commute, what time of the day they travel. There is a lot that is coming through our algorithm and we enrich that data. This data is useful to corporations, county governments and transport agencies.”

Since May, Ma3Route has been piloting a six month accident mapping project collecting accident reports from users. It plans to release a comprehensive report that could help shape policy decisions on road safety.

Solving mobility challenges in Nairobi is however also attracting many other tech companies, including global giants. Earlier this month Google launched in Kenya its traffic-mapping app Waze. In 2013 multinational IBM introduced a project called Twende Twende (“let’s go” in Swahili) that sends motorists text messages informing them of traffic conditions and recommends routes to avoid congestion.

Eboko notes the development of these solutions is in line with increasing demand for easier mobility.

Ma3Route plans to launch in the port city of Mombasa later in the year and eventually to other secondary cities in Kenya.

“We are also looking at expansion outside Kenya in emerging cities across the globe that have infrastructure challenges, traffic issues and growing populations,” says Eboko.

“Many emerging cities in the world are a potential market for us. Think about Mombasa, Lagos, Cairo, Kinshasa – and even cities in India like Mumbai and New Delhi.”