Fast-food chain KFC has been operating in South Africa and some of its neighbouring countries from as early as the 1970s. However, it was only at the end of 2009 that it expanded its footprint further north into sub-Saharan Africa with the opening of the first KFC outlet in Nigeria. 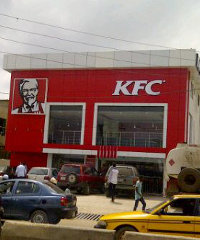 A KFC outlet in Lagos, Nigeria.

By the end of 2012 KFC had stores operating in Angola, Nigeria, Namibia, Botswana, Mozambique, Lesotho, Malawi, Swaziland, Ghana, Kenya and Zambia. KFC has plans to extend its reach to Zimbabwe, Tanzania and Uganda in 2013, with much longer-term growth plans to establish itself in the Democratic Republic of Congo, Ethiopia and Senegal.

KFC’s general manager of new African markets, Bruce Layzell, however, believes one cannot take a blanket approach to doing business on the continent. He says companies need to understand the complexities of each country in Africa. It is for this reason that KFC restaurants in each African market differ in order to make the brand relevant in a local context.

In an interview with How we made it in Africa, Layzell discussed this and KFC’s business on the continent in general. Below are some edited excerpts.

In a recent press release you’ve noted that taking a blanket approach to doing business in Africa does not work. Can you elaborate on this, and give us some examples of how your KFC stores differ from one African country to another?

And do you adjust the menu for specific countries?

Absolutely. Our core products – you know KFC original recipe chicken – are standard in all of our restaurants. What we do find is a lot of countries have an affinity for spicy foods. So in those markets we will put on our brand standard hot and crispy chicken. In West Africa they eat a type of rice called jollof rice, so in Nigeria, we have jollof rice on the menu. In Kenya they have a product called ugali (a type of porridge made from maize flour), so we will put that on the menu, and we will try to put a KFC spin on it so that it becomes unique to our brand. When there is a need for some localisation of the menu, we absolutely will do that.

Which of the sub-Saharan African countries that KFC entered over the last few years are your most lucrative markets?

Nigeria is key just because of the volume of potential customers that are there. Ghana is another great market in the same area, not as big a market [as Nigeria] obviously, but just a wonderful place to do business. It is a great democracy, and there is some great economic and political stability there. And then we have an East Africa hub – Kenya, Uganda, Tanzania. If you put those three countries together it is more than a 100 million people. So I would say those are the key markets for us.