Last month, serial entrepreneur Alan Knott-Craig Jr told an audience at AfricaCom conference that 50% of households in South African townships now have access to Wi-Fi-enabled devices. However, access to data remains expensive in the country, with a 5GB bundle on a mobile device costing around R360 (about US$31). For the majority of South African’s this is a luxury they cannot afford. 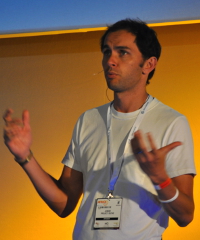 “People like me are showing the telcos how to roll out data… Part of it is that you have to separate the voice from the data,” said Alan Knott-Craig Jr, founder of Project Isizwe.

Enter Project Isizwe, a non-profit initiative that is bringing free Wi-Fi to low-income areas, through a partnership with local governments.

The initiative has already rolled out Free Internet Zones (FIZ) across South Africa. The pilot project was launched in the City of Tshwane last year where its mayor Kgosientso Ramokgopa agreed to a R1m ($86,000) quote to roll out Wi-Fi capacity for 25,000 people for three years. Citizens get a data cap of 250MB a day per device.

The pilot project’s success led to a R53m ($4.6m) contract being signed and rolled out in June this year – this time with Wi-Fi capacity for one million people. And according to Knott-Craig, Project Isizwe is now rolling out a R100m ($8.6m) project to cater for two million people.

Similar projects have also recently been launched in Atlantis and Robertson in the Western Cape.

In an interview with How we made it in Africa, Knott-Craig explained that Project Isizwe has initiated a model where it costs the government only R1 ($0.09) per GB.

“People like me are showing the telcos how to roll out data… Part of it is that you have to separate the voice from the data. As soon as you build the network that has to do voice and data, the cost of the network goes through the roof. Because when you are on a phone call and you drop the call, and there is a bit of interference or static, you lose it,” he explained.

“Data is not like that. On the internet you can have a slightly slow page, you can drop a packet, and it can recover. It does not destroy the user experience. But to go from 90% quality of service to 100% quality of service, which is what voice requires, you take it from $10m to $100m. So it’s that exponential cost to make it perfect, and voice has to be perfect.”

And how did Project Isizwe manage to lower data costs to a price that government can afford on behalf of consumers? During his speech at AfricaCom, Knott-Craig said the initiative’s model managed to lower the cost for four major expenditures needed to build the average telecommunications company.

First was lowering the costs of Project Isizwe’s capital expenditures.

The second major factor facing a telco is the cost of using or renting sites to set up base stations. To overcome this cost, Knott-Craig said the logical solution was to partner with local governments.

“The only way you can get around the cost of sites is if you work with governments, and governments own everything – especially the local governments, the municipalities. And once you start realising that governments own lamp posts, parks, libraries and schools, you realise that if you can put your equipment on all of those buildings, not only do you not have to pay rent, but you can use their electricity.”

The third cost to reduce was labour, which Knott-Craig said was also cheaper with Wi-Fi, compared to 3G where engineers can be paid R2,000 ($172) an hour.

“With Wi-Fi you basically need a guy who can climb a mast, bolt antennas on top of a mast, plug in the electricity and climb down the mast… and you can pay them R100 ($9) an hour versus R2,000 an hour.”

The final expense was bandwidth costs that needed to be significantly reduced in order for the initiative to succeed. After an unsuccessful meeting with Telkom, Knott-Craig approached the telco Neotel, which agreed to allow them to use their un-utilised fibre.

Potential for all of Africa

Knott-Craig believes that internet access should be a free service provided to everyone across the continent, which in turn can have a considerable socio-economic impact. Because of this he left the world of for-profit enterprises to focus Project Isizwe.

“Internet access leads to jobs… People can email in their CVs, they can look for jobs, and it lets them start online businesses,” he continued. “Probably most importantly [is its impact on] the youngster who is trying to get ahead, and doesn’t have to rely on his teacher coming to school or his textbooks getting delivered – he can just go online and find the course material.”

Outside of South Africa, discussions over possible partnerships with other African governments (such as in Botswana and Uganda) are already underway.