Award winning entrepreneur, Andrew Mupuya, was 16 when he came up with the idea to manufacture paper bags in Uganda. In 2008 the government was considering banning the use of polythene plastic bags and he saw an opportunity for an environmentally friendly business. 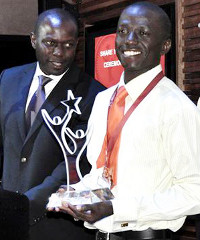 In 2012 Andrew Mupuya (right) won first place and US$30,000 in the Anzisha Prize youth entrepreneurship competition.

While still in high school in Kampala, Mupuya raised 36,000 Ugandan shillings (about US$18 at the time) by collecting plastic bottles and selling them to a recycling plant. He used this initial capital to start making paper bags by hand, a business he officially registered as Youth Entrepreneurial Link Investments (YELI) in 2010. Around that time Mupuya’s parents were struggling with unemployment in the town of Mbale and he had to find a way to assist his family financially and pay his own school fees.

Although the Ugandan government is yet to implement a ban on plastic bags, YELI is the first locally registered paper bag and envelope producing company in the country and has since grown to manufacture 22,000 paper bags a week, supplying 83 clients across Uganda. These include retailers, hospitals and flour manufacturers such as Maganjo Grain Millers and Akamai Foods. Mupuya has also diversified his line to include gift bags.

YELI currently employs 20 people, including a 56 year old father of eight, and Mupuya has also opened a distribution outlet for bags and envelopes in Mbale that is being run by his mother.

Furthermore Mupuya is putting himself through university and is currently completing his final year of a bachelor’s degree in commerce at Makerere University.

How we made it in Africa asked him how he manages to run a growing business while completing his university degree.

“By laying a proper time frame, utilising 24 hours properly, and doing what’s important and leaving what’s not,” he said.

Mupuya’s business success has not gone unrecognised and he is no stranger to media attention. In 2011, YELI was the recipient of 2.6m Ugandan shillings ($1,000) in a business plan competition and in 2012 Mupuya won first place and US$30,000 at the The Anzisha Prize, a competition that recognises and celebrates African entrepreneurs under the age of 22 who are using business to solve problems in their communities. The same year he also received the FERD Award for Social Entrepreneur of the Year.

After university, Mupuya wants to focus on expanding YELI with the aim of setting up a paper bag manufacturing plant to cater for other African markets. Currently, all his paper bags and envelopes are produced by folding and gluing by hand.

“I need huge capital to acquire the machinery I need for expansion. It’s the greatest challenge,” he explained, adding that there is some competition from large foreign companies importing products into the market.

According to Mupuya, both the government and the private sector could do more to support local entrepreneurs, as foreign investors are often favoured over local companies and given better incentives to do business in Uganda, such as tax holidays.

“Then some clients have the impression that a company owned by a big foreign investor, normally Indian and Chinese, is [better] so they change their minds when they realise it’s me,” he noted.

Mupuya plans to counter this perception by focusing on the quality of his products.

Mupuya, who has trained over 500 individuals in making paper bags, believes that entrepreneurial success takes hard work, honesty, networking and making use of available resources.

He added that young entrepreneurs should open their eyes and look around their environments for business opportunities. “Young people should focus on turning challenges into opportunities, and learn how to be independent at an early age,” he advises.