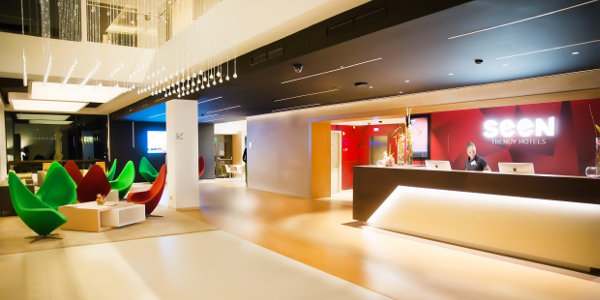 The lobby area of the new Seen Hotel in Abidjan.

Mangalis Hotel Group – owner of the Noom, Seen and Yaas Hotels brands – recently announced the opening of a new hotel in Côte d’Ivoire’s commercial capital Abidjan. How we made it in Africa asked the company’s CEO Olivier Jacquin about the potential he sees in French-speaking West Africa. Here are slightly-edited excerpts.

Why did Mangalis pick Abidjan for its new 149-room Seen hotel?

Côte d’Ivoire and Abidjan, with over 6 million inhabitants, is one of the core markets in the African business scene and one of the fastest-growing economies (8% GDP growth in 2016, according to the IMF). Several European, Gulf and regional carriers, such as ASKY and Air Côte d’Ivoire, have increased their frequency to and from the country, confirming its positioning.

When looking at Abidjan’s hospitality landscape, the city has over 300 hotels but relatively few internationally-branded properties. The Seen Hotel Abidjan Plateau adds to the regional brand offering, catering for more budget-conscious travellers.

In 2018 we plan to unveil our Noom Abidjan hotel with over 250 rooms and suites – it will be our flagship property for the Noom Hotels brand. With over 399 rooms in Abidjan in 2018, we hope to add to the diversity of the city hotel offering for the various types of travellers.

All Mangalis’ current hotels are in Francophone West Africa. Why have you decided to focus on these territories, as opposed to countries such as Nigeria or Kenya?

French-speaking West Africa is the base and core market of our parent company Teyliom International. Our decision to launch the brands in Conakry (Guinea), Dakar (Senegal) and Abidjan respectively, was based on a gap analysis conducted on the regional offering.

In key hubs such as Abidjan, one of the most bustling cities in Africa, we launched our upper-midscale brand, Seen Hotels, and in Dakar the Yaas Hotel, our economy-lifestyle brand. The latter, so far, has proven to be a good success judging by its high occupancy rate since opening. As for Noom Conakry in Guinea, when we started the project there was clearly an insufficient number of hotels offering an international standard in Conakry. At the time, the Novotel was the only international brand in operation.

Having said that, we are pursuing our expansion plans and have 10 properties under development scheduled to open between 2018 and 2021. We have prioritised our market but naturally explore all opportunities. Nigeria is a key focus and we are actively promoting our brands to get the right partner in major Nigerian cities and in Eastern African countries.

The region’s penetration of branded hotel chains is four times less than Europe. There is a huge gap in the midscale and economy segments.

There is still room for various hospitality players in Africa. The continent is big and with its growth projections, it will take various players to respond to the demand. Looking at the development pipeline report recently released by W Hospitality, there are over 417 hotels in the pipeline this year, with a total number of 72,486 rooms.

Mangalis has 10 hotels in the pipeline for the following five years in nine different countries. There is room for us to grow in the region, which has travellers in need of hotels with international standards that provide a safe environment and the latest technologies.

Mangalis Hotel Group was established in 2012. Tell us about some of the biggest challenges you’ve faced on the journey so far.

As we all know, the Ebola crisis had a significant impact on the overall African business environment. Our activities were therefore delayed, especially the opening of Noom in Conakry, and we had to postpone our Sierra Leone hotel project.

Finding trained and skilled workers has also been a challenge on the continent. We therefore invest heavily in training to ensure our guests are served to an international standard.