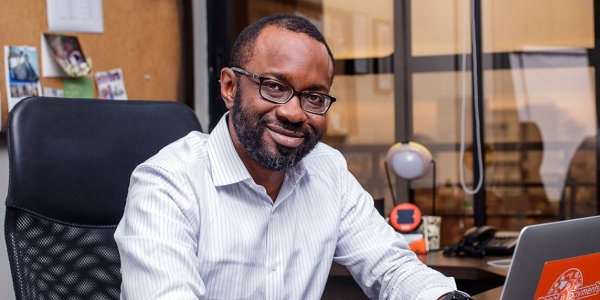 The golden coastline of California wasn’t enough to keep Tayo Oviosu from returning to Nigeria to found Paga – a secure payment ­system that has become one of the country’s most widely used platforms.

Built on the principle of “appropriate technology” able to operate in any environment and on the most basic mobile phone, Paga addresses an issue that is critical to Africa’s development: the availability of financial services to all.

“The opportunity I saw is one that exists across the continent,” says Oviosu. “Traditional banks don’t have the reach to the mass market and so these economies are inevitably cash driven, and it’s difficult to make payments and effect commerce. So if Nigeria is to be the economic juggernaut it really could be, you have to solve payments and make it easy for people to pay or get paid; and it has to be easy for people to access finance.”

Paga’s six million customers can make such payments through options ranging from smartphone-supported apps to simple codes punched into basic phones, or through Paga’s nationwide network of 11,000 agents – set to double within a year.

At the same time, more than 5,000 merchants and businesses use Paga to facilitate transactions, including one large Western company you might have heard of – Uber.

“Uber is still very focused on card payments, so we will give them a path to the mass market – including those who don’t have cards or who aren’t comfortable with using them,” says Oviosu. One of Paga’s goals has been to balance ease of use with the security of its platform.

Out of Nigeria’s 180 million population, only 25 million people have a bank account, and most account holders have very little in those accounts. Meanwhile, the country’s 21 banking chains have a total of 5,000 bank branches, while only 900 ATMs are available outside those branches.

“So the opportunity we have is to leverage connectivity and access the internet to drive electronic transitions,” says Oviosu.

While currently the main means to achieve this is the mobile phone, it won’t necessarily stay that way. When Paga started, almost all its agents conducted business on mobile phones; now only about 30% do so, as agents find laptops easier to use for entering data and customer information.

“I’m wearing a smartwatch connected to the internet, and that can do transactions,” Oviosu says. “There’s too much emphasis on mobile phones. [Most importantly] it’s about connectivity and the form factor will change over time. Most Africans connect via phone today, yes, but it’s important not to overemphasize it as the channel.”

Oviosu puts Paga’s success in becoming one of Nigeria’s most widely used payment platforms down to three key factors.

“Firstly we’ve been fortunate to have fantastic people around the table; we have a great team that is very focused on the vision of what we’re trying to achieve – we wake up every day and this is what we do and think about.”

Next, he says, is having a great group of investors providing the required backing while allowing the company to do the work it needs to do. The final factor is how the company has focused on building its agent network to facilitate payments – a process that continues with an eye to the future.

“Our strategy for further growth is to continue building that agent network and to roll out digital financial services such as savings and loans to the mass market, which will really drive financial inclusion in Nigeria.”

Currently about 39% of Nigeria’s population are financially excluded, a figure the Central Bank of Nigeria aims to reduce to around 20% by 2020.

“The channel that we provide around our agent network and the distribution there will be key to making that happen,” says Oviosu.

One of Paga’s merchant partners is Jumia, Nigeria’s largest e-commerce platform. But despite this, e-commerce actually plays a relatively small role in Paga’s affairs.

“The bulk of people on Paga use it so send money to others or to pay for utilities; the market’s just not ready for e-commerce in Nigeria, it’s still very young,” says Oviosu.

Hence, while much digital ink has been spilt on the potential of e-commerce taking over the high street, Oviosu doesn’t see that happening any time soon in Nigeria.

“In places like the UK they’re still purchasing offline in big numbers, as they want the experience of going out to the store with friends, or with their boyfriend or girlfriend, and Nigerians are no different,” he says. “The malls in Nigeria are packed; building stores and malls – that’s where the market is today.”

At the same time, he acknowledges that e-commerce is taking more of a hold in specific segments of the market.

“It’s more services such as travel, booking air tickets and social media that people are ready to be online for. It’s not yet the heavy-lifting Amazon.com-type of business.”

During the past few years, global business has resonated with talk of Africa as a tantalising final frontier, but Oviosu is one of those less than satisfied with such a narrative.

“I don’t subscribe to talking of Africa as one entity – every country has different dynamics, so you have to look at each market,” says Oviosu. “Now when I look at each market on its own, my view is it’s not about Africa being the next frontier, rather it’s about Nigeria [being it]; the Africa story is the Nigeria story – Africa will go where Nigeria goes, and that story is still being told and has a long way to go.”

He bases this on Nigeria’s colossal scale in economic terms, noting how the state of Lagos is Africa’s fifth biggest economy with a GDP estimated at $131bn in 2015.

Nigeria’s huge potential played a large part in his decision to move back from the US. “I want to be part of the development of that story, and I want to see Nigeria become the giant of Africa again,” he says. “I know it has the potential, so it’s about us building the foundations to help it achieve that potential.”

For those who harbour similar intentions of getting involved in Nigeria or Africa, Oviosu has the following advice: “You have to be very clear about why you are doing what you are doing, and you have to be really dogged, because you’ll face lots of challenges – ones you wouldn’t face in the West,” he says. “And you have to pay attention, even more so, to non-market forces.”

This means the likes of regulators and outside groups interested in, or influencing, your sector, while making sure you are plugged into the related conversations.

Finally, he advises that anyone doing business in Africa has to be patient. And that applies to interacting with both governments and the private sector to get things done.

“If I’d had a more acute awareness of that at the beginning, I’d have changed how we executed things,” Oviosu says. “It takes a lot longer here.”