Last year’s terrorist attack at Nairobi’s Westgate mall led to millions of dollars in losses for about 100 businesses that operated in the shopping centre. In the aftermath of the attack, business operators have had to pick up the pieces, relocate to other malls and enter new partnerships. Many businesses have faced hardships as they did not have anti-terrorism insurance while employees have lost their jobs. 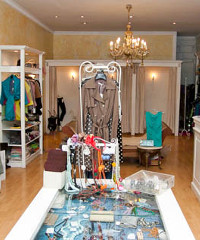 Messeguer told How we made it in Africa that the attack’s impact on business was “terrible”. All other shopping centres in Nairobi closed for four days and when they reopened, they struggled to attract clients for a while as people stayed away from malls out of fear.

At Westgate, Messeguer counted even more losses. Before the attack, she says, attracting clients to her store which was located on the first floor of the mall was difficult since most traffic concentrated on the ground floor where coffee shops and a large supermarket operated. But business had “started doing well” and traffic had improved significantly.

Her staff were trapped in the mall for six hours but emerged unharmed. Her stock was destroyed and,to add insult to injury, she had to pay to hire people and a moving company to remove cabinets from the damaged store.

“About 90% of my clothes had bullet holes. I just put them in boxes in case the police needed them,” she says. “It was so bad but I can’t give up. I have invested a lot in my business. If one store goes down I have to continue running the others. I have no choice but to keep going.”

Kache By Angie currently operates four stores in different shopping malls in Nairobi. The high quality, “classy and stylish” outfits sell from KSh. 3,000 (US$35), while the most expensive evening dress can sell for KSh. 40,000 ($462). The business has carved a niche in the market, selling the latest fashion collections from Barcelona, Spain.

“I want to identify my original country with my adopted country,” says Messeguer. “For the last three years we have held an annual catwalk [show] at the Spanish ambassador’s residence. Last year’s theme was ‘Made in Spain’ because Spain is facing many difficulties. I wanted to do something that makes Spain glow again and shows its glamour. It was a beautiful evening.”

Messeguer moved to Kenya 16 years ago to join her then boyfriend (now her husband) who had relocated here. They made the decision to travel to Africa on their second date as they spoke about the 1985 film Out of Africa. Kenya, where the film was made, became their choice of destination.

When she moved here, Messeguer struggled to find employment because it was difficult to get a work permit and her English wasn’t very good at the time.

Messeguer holds three degrees in psychology and marketing. Her first contact with the fashion industry came when she worked for a Japanese company that made make-up specifically for catwalk shows and film. She worked as the commercial marketing manager for Spain.

“I am not a fashion designer. It was not in my plan. I really wanted to be a psychologist,” she says.

Every time she travelled to Spain, Messeguer would buy clothes for herself, which most of her friends in Nairobi loved. Some would ask her to buy them a few outfits during her trips. She then decided to start bringing in some clothing items which she would sell at a profit. “I could see people here were hungry for new things, especially things from Europe and things of high quality.”