“There is hardly any mining jurisdiction in the world that does not have any issues,” noted Denham Capital’s managing director Bert Koth, during a panel discussion on private equity’s impact on the mining sector at the recent African Mining Indaba in Cape Town. 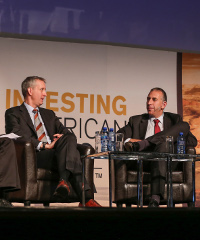 This extends beyond the perceived risks associated with African economies, to developed economies such as Australia and its “super tax”, added Koth.

“Every single jurisdiction has its own particular risk profile. So what we do is analyse everything on a case-by-case basis… Everybody’s risk has its price. If the size of the price justifies assuming the risk, if we believe we can bring the risk-mitigating tools to bare to actually reduce the risk profile, and do this together with a team that has succeeded in that country before, then for us it is a potential investable proposition.”

However, Koth and his co-panellists in the private equity industry highlighted a number of general factors and criteria they consider when looking at potential mining deals.

David Thomas, managing director for Canada at Resource Capital Funds, said it can be extremely difficult to find mining projects that meet the fund’s investment criteria. In fact, he estimates only one in 100 make the cut.

However, he added one thing he does do when considering the merits of an investment, is calculate whether it can still produce adequate returns on an upwardly revised amount for initial capital.

“Because of the capital costs blowouts we have seen in the industry, we will take a company’s feasibility study numbers for initial capital and will immediately multiply that by 1.25 on our financial models. That’s a starting point. We will take a hard look at operating costs assumptions and so on.

“We actually hit the project really hard, and then if it still comes out showing it can give us an adequate return, I can feel pretty comfortable that I can pass that on to one of the deal teams and they will be able to come up with an opportunity that will be attractive to an investment committee,” he explained.

“So it is a very small, select group of assets that meet those internal hurdles, and we have got a lot of ‘deal flow’ as you can imagine. But a lot of it is stuff that’s been around a long time and has just been rebranded, or there is a new management team but the project hasn’t changed. So we spend a lot of time saying ‘no’.”

“It’s more or less the same criteria as Resource Capital Funds… It has to survive stress-testing on capex overruns. It has to deliver risk-adjusted appropriate returns assuming long-term [cycle] metal prices. And it has to have a survival strategy in the draft,” he highlighted.

While Koth said he wouldn’t go as far as saying Denham Capital would never fund an underground mining operation, he noted the injury and death rates of these types of mines do increase the investment’s risk.

That said, Koth added it’s “unlikely” the firm will fund underground mines that go as deep as 3,000m, as seen in some South African mines.

“But if it’s an underground mine that goes down 300-400m, and if we can implement it safely with our management teams and it stacks up economically, then why not?”

Neil Brown, director of policy and research at KKR Global Institute, said with the commodity price drop and the struggles facing the mining industry, investors are looking for less-risky economic environments with transparent tax regimes and regulations.

And Thomas agrees. “The one thing governments need to understand is investors do not like uncertainty.

“They like to know where the goal posts are because when you are making a capital investment into a country, that capital is stuck there once you’ve made the investment. So nationalisation, creeping expropriation and changing of tax regimes – these are the sorts of things that keep guys like us up at night.”

He advises governments to reduce risks associated with investing into their countries by fostering an economic climate of certainty.

“Mining companies are okay with paying taxes, helping with regional development, and trying to do their bit for society. But at the same time there has to be recognition that for us to do these sorts of things and deploy capital in these countries, we need to be able to generate satisfactory returns.

“So if you start layering additional taxes and royalties or sort of free carried interests on projects, you will eventually kill the golden goose.”