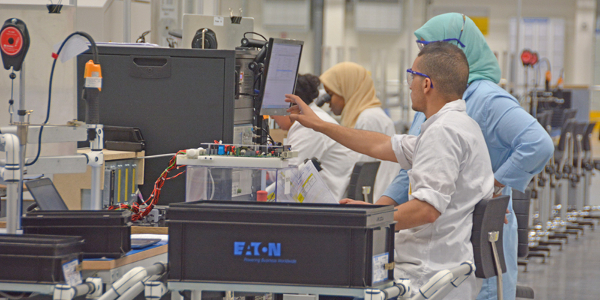 Eaton joins a list of large manufacturers that are setting up facilities in Morocco.

Morocco has steadily been creating a name for itself as a manufacturing hub. The country’s geographic location is a competitive advantage, offering manufacturers easy access to European, African and Middle Eastern markets. Playing to this, the Moroccan government established the National Pact for Industrial Emergence in 2009, a document that outlines clear objectives when it comes to building industries in high value-added sectors. Morocco has since invested in industrial parks, free trade zones, and supporting infrastructure such as railways, storage facilities and ports.

And it has paid off. Already the country has established an automotive manufacturing hub. Renault’s factory in northern Morocco is the largest car manufacturing plant in Africa, with the capacity to produce 340,000 vehicles annually. Other industry leaders such as French car maker PSA Peugeot Citroën and Canadian auto parts supplier Linamar have followed suit.

The country is also attracting manufacturers from other sectors. For example, last year the leading Japanese fibre-optic maker Furukawa Electric announced plans to set up a US$8 million factory in Tangier, and this year the CEO of aircraft components manufacturer Strata, Badr Al-Olama, said that the company is considering setting up a Moroccan production facility.

Recently, global power management company Eaton opened its new $12m facility in the Casablanca Midparc Free Zone – part of the Moroccan government’s National Pact for Industrial Emergence. The multinational, which produces a variety of products and solutions for the management of electrical, hydraulic, and mechanical power, has manufacturing operations in more than 90 countries worldwide. But its plant in Morocco is only its second in Africa (it also has a facility in South Africa). It will build circuit breakers and a range of other products, as well as serve as a pilot manufacturing site for Eaton’s energy storage battery packs and systems.

According to Seydou Kane, the company’s managing director for Africa, there are several factors – in addition to its geographic location – that make Morocco an attractive manufacturing location. These include its political stability, logistics and transport infrastructure, and an environment generally conducive to business. Morocco is the third easiest African country in which to do business, according to the 2017 World Bank ease of doing business index.

“It is really a pure industrial and commercial logic that has driven our decision to set up operations there.”

Kane notes the country also has skilled labour, which improves productivity. “And that is critical in our line of business,” he adds

“When I look at Morocco and South Africa, they are on the same level of productivity, if not higher in some cases, that our sister manufacturing units across the world.”

The government has set up training programmes for employees in the manufacturing sector and Eaton has partnered with the Institut des Métiers de L’Aeronautique in Casablanca to create a seven-week training facility for all future electronics employees.

“That is a massive competitive advantage and something Morocco has got right – making sure they set up and make available the specific skills that are required for the industry they want to attract in the country.”

In addition, Kane notes that the cost of skilled labour in Morocco is competitive when compared to elsewhere.

“We have been attracted by the stable and conducive business environment. Things were set up right in terms of the industrial parks they have developed, access to energy, access to good logistics systems. And really in a way it is not more difficult to set up an operation in Morocco than anywhere else in the world, like Europe or the US and so on. The government has put, in our view, a good enabling environment [in place]. That is why we are there.”