Unemployment remains stubbornly high in South Africa and is one of the greatest socio-economic problems currently facing the country’s youth. 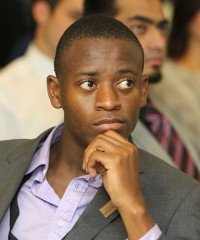 Many are turning to entrepreneurship to make ends meet. But some have found it easier than others.

Job creation was a leading goal of government policy during the first decade of democracy in South Africa following the end of apartheid in 1994. However, little success has been achieved in the struggle to create sufficient jobs.

South Africa’s unemployment rate stands at 25.2%, creeping up by 1.1% from last year. There are now more than 5m people without work. However, the expanded definition of unemployment, which includes people who have stopped looking for work, is at 35.1%.

Twenty-four year old Sibusiso Ngcobr said he can no longer wait for the government to create a job for him.

“It is hard to find a job. You cannot sit because your brains would blast out of your mind, you cannot sit and do nothing,” he said. “I can’t wait. I have to eat, I have brothers to support, I have a family to feed.”

He, and other South Africans like him, are finding ways to create their own opportunities.

Ngcobr started up his own retail company in the Orlando West area of Johannesburg last year.

But he complains that the government’s attempts to help small business owners like him, with a basic education, are bound in red tape and bureaucracy.

“Coming from a previously disadvantaged background, you don’t have security, your house is just a small house, then you go to the bank – you have a great brilliant idea, they say they want surety, they want collateral – what do you have? You have nothing,” Ngcobr said. “You can’t say, I have my high school diploma here – you can’t say that. You have to begin from grassroots.”

Beginning from grassroots is exactly what Ludwick Marishane did.

Marishane started businesses as a teenager in rural Limpopo, a northern province in South Africa with stark levels of poverty.

Some of his ideas failed, but Marishane’s life-changing engineering inspiration came during a lazy day of sunbathing.

His friend did not want to take a bath and wondered why no one had invented a product to substitute for showering. A few years later Marishane had created the Dry Bath Gel, a waterless shower alternative that could save time for some, but also help those with no access to water.

“I scraped together whatever resources I had available. I didn’t have computers or resources like that so I would have to use the local computer café, where it cost about US$2 an hour to use the internet. My allowance was $5 – that was my pocket money and lunch money,” Marishane said.

Drafting an 8,000-word business plan on a simple phone in his last year of high school, Marishane sent it to 80 venture capitalists.

But none were willing to take a risk on a young inventor with a product that they considered mostly helped the poor, he said.

“I looked at different sources – the different banking loans and the different development loans that government had made available in South Africa for small businesses – and I was unsuccessful. Part of it was the red tape and the amount of bureaucracy involved in trying to access those types of funds, and at the same time my business – it wasn’t a bankable idea,” Marishane said.

Entering the product into competitions, he slowly gained some capital to develop his business.

Marishane is now the youngest patent holder in South Africa. The company claims to have provided 445,590 baths, saving over 35.6m litres of water, crucial for a country facing a water crisis.

Marishane cites education as one of the biggest advantages in starting a business.

That is a sentiment echoed by Jason Basel, founder and president of Àkro Organisation, which aims to bring young entrepreneurs together and equip them with practical, action-orientated knowledge to help kickstart their businesses.

“Entrepreneurship and education, that’s how you solve unemployment. Full stop, there are no two ways about it,” Basel said.

He also said that the lack of practical business education is hindering people from realising their potential business ideas.

While there is plenty of business potential among South Africa’s youth, the country lacks the services to enable its young entrepreneurs.

What Marishane and others have shown is that you can overcome the odds with one great idea. – VOA