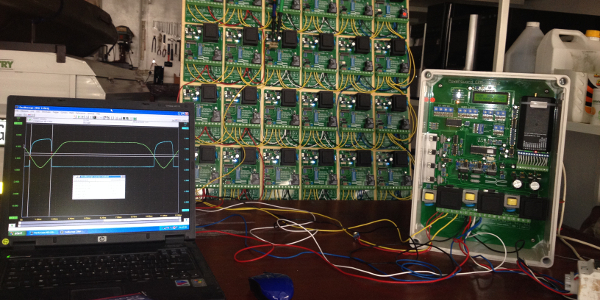 PowerGuard allows businesses to moderate their power supply and reduce electricity demand during peak times. It was invented by Johan Theron who has been nominated for this year’s Innovation Prize for Africa.

In early 2008 South Africa’s state electricity utility Eskom was forced to roll out national power cuts as it was unable to meet energy demand. This “load shedding” is said to have cost the economy around R50bn (US$3.2bn) as shopping malls saw periods of darkness and mines had to temporarily cease operations. And while most South Africans and businesses felt frustrated by the challenges, one electrical engineer saw a massive opportunity.

Johan Theron (68) is the inventor of PowerGuard, an innovation that allows businesses to moderate and control their electricity demand. This leads to more efficient power usage, to help reduce cuts and their overall electricity bill.

The technology helps businesses to direct power to areas most needed and reduce demand in areas least needed during certain times. For example, in the mornings a hotel might be using more power as guests are showering, breakfast is being prepared and a conference kicks off. To ensure that the electricity doesn’t cut out during these peak times and to reduce costs, PowerGuard allows control over where power is directed. For instance, geysers can be staggered to reheat water (once guests have showered) at a later stage when there is less demand for electricity.

He has also developed another product, called the Elon, which is an easy-to-install technology that allows customers to seamlessly switch between their utility power supply and solar power to efficiently heat water. Combined with the PowerGuard technology, operators can supplement just enough utility power with their solar power capacity to ensure their water is properly heated, even on cloudy days.

His innovation earned him a nomination for this year’s Innovation Prize for Africa.

While load shedding made a comeback in 2014 and 2015, Eskom has stated there will be no more scheduled power cuts for the 2016/2017 financial year. However, electricity tariffs have risen considerably and placed a burden on businesses and Theron sees a large market for PowerGuard amongst companies looking to reduce their electricity bill and prevent power trips.

He added that it can take between eight and 24 months for clients to see returns on their PowerGuard investment, depending on the system. “If they have got a boiler system they very often amortise within a year. If we only do the air-cons it can take up to almost two years before they amortise.”

However, Theron has his eyes on other African markets, where regular power cuts are far more frequent. His solution can already be found in Namibia, but the company is looking to expand elsewhere on the continent.

“If you look at places like Zambia and Angola, for example, they have enormous amounts of power outages and, at the moment, that is where this product is being aimed.”

Theron, who designed electronics for mining company Anglo American for years before starting his own business, said one of the greatest impediments to innovation in Africa is lack of finance. For example, just certifying new technology can cost thousands, which can be especially limiting for small companies or start-up entrepreneurs with great solutions, but small budgets.

However, he believes that the innovations that will be successful in Africa will be those that are affordable and reliable.