Water transportation was once a vibrant industry in Uganda. The collapse of the ferry system on Lake Victoria has had a severe impact on economic activities around the lake. Today, EarthWise Ferries is restoring these services in Uganda, serving an emerging merchant class. South Africa born entrepreneur Robert Smith, founder and CEO of EarthWise Ferries, shared with How we made it in Africa’s Dinfin Mulupi his experience of doing business in Uganda and the impact of re-establishing economic corridors across and around Lake Victoria. 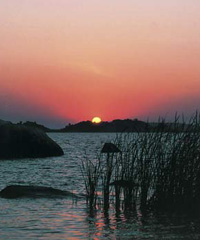 Lake Victoria is the largest lake in Africa

Since the launch of your first vessel MV Amani, what experience have you had in business?

The inspiration to establish EarthWise Ferries came from the desire to create wealth, provide a service for the emerging middle class and directly employ people while building infrastructure, which is sure to have a multiplier effect on the regional economy. Since the launch of the MV Amani, there has been a significant increase in ridership. EarthWise was asked by the Ugandan government to ply a route to the Ssese Islands 35 miles south-west of Kampala. Although this was not part of the original business plan, EarthWise has been able to train a committed crew, develop operating procedures, and provide a comfortable and safe passenger ferry service. In order to help cover the costs of running to the Ssese Islands, EarthWise has also run evening cruises in Murchison Bay for local businesses and hotel operators. This has helped to bring the operation towards a break-even position.

What challenges have you faced?

The greatest challenge facing EarthWise has been working though the bureaucracy and lack of supporting infrastructure. The ports require maintenance and modernisation. Generally speaking, governmental offices are willing to work with EarthWise and are very cooperative. However, sometimes there is a lack of clarity about certain areas of responsibility, which causes delays and confusion. The labour force, although plentiful, does require training, which is costly and time consuming. Finally, when running a service oriented company, training management and employees to operate in a consistent and on-time manner takes extra effort and considerable amounts of time.

Describe your experience of doing business in Uganda.

We embrace the growing desire expressed by the government in Uganda to encourage the private sector to invest in their country. We have avoided the challenges of doing business in Uganda, such as its reputation for bribery and corruption. I applaud Uganda for taking a more aggressive stand against corruption, thus making any bribe asking illegal. We therefore take a similar stand and do not allow our employees to pay any sort of bribe in order to facilitate our business. This has kept us out of trouble, although we have wondered if our firm stand has caused unnecessary delays at times. We have had hints from officials, but we ignore them. I believe that the opportunities in Uganda are solid. This is especially true if there is continued political stability and continued pressure against corruption. I do worry that the discovery of oil will fuel a new era of corruption as the spoils are fought for. We shall see if this turns out to be true.

Do you intend to expand to other countries that rely on Lake Victoria, like Tanzania and Kenya?