For those who aren’t familiar with South Africa’s informal settlements, it is estimated that seven million South Africans live in shacks in the country’s many “squatter camps” located around all major cities. 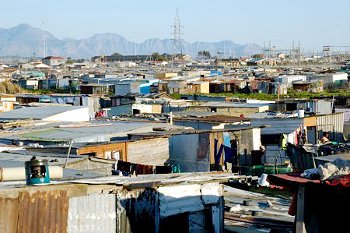 These shacks are made out of corrugated metal and scraps that make homes uncomfortably hot in summer and icy cold in winter. Many of these informal settlements and their inhabitants are located illegally and while efforts are being made by the government to provide formal housing, shacks are likely to be part of the South African landscape for the foreseeable future.

The iShack, abbreviated from improved shack, is the proposed answer to this problem. While it does not replace the need for formal housing and electricity, it offers renewable energy solutions and is designed to improve living conditions. It is posed as a temporary solution and simply offers slum dwellers a more comfortable shack experience while they wait for formal housing.

The idea was first developed by Professor Mark Swilling, an academic director at the Sustainability Institute (SI), and Andreas Keller, a sustainable development student at Stellenbosch University who researched the iShack concept for his master’s thesis.

“The idea to upgrade shacks by improving them where they are has been something that Professor Mark Swilling has been thinking about for a while,” explained Keller. “He was my academic supervisor for my master’s studies in sustainable development and suggested I look at how to upgrade a current shack through cheap, readily available materials. From this emerged the idea that if one had the possibility to build a new structure – how would one do this better? These questions were asked within numerous contexts, namely a shift in housing policy and discourse towards one that favours upgrading of informal settlements (as opposed to relocation); a discussion on urban energy poverty; and inadequate pro-poor energy policies. These different strands were brought together in the conceptualisation of the improved shack (iShack).”

Keller’s thesis became the basis for a project which includes the collaboration of a number of institutions and organisations such as the SI, Stellenbosch University’s TsamaHub, and the Stellenbosch Municipality. “The actual designing [of the iShack] was done through a transdisciplinary research process involving the advice [and] expertise of slum dwellers, academics, and consultants,” added Keller.

The iShack was first introduced in the Enkanini informal settlement, located in the town of Stellenbosch, outside Cape Town. Although the cost of the iShack is almost double the cost of the typical shack, it offers way more.

The iShack features an improved design and a rooftop solar panel. It is positioned strategically so as to keep its inhabitants from feeling the extreme temperatures that corrugated iron dwellers usually experience. The floor and back wall are made of various insulation materials and windows are strategically placed to allow a breeze to pass through in summer. In addition, the roof is sloped so as to allow the collection of rainwater, and has a slight overhang in the front to provide the northern wall with shade during the hottest days in South Africa’s summer. Fire retardant paint is also used to reduce the risk of fires, a major concern in high-density informal settlements.

The solar panel produces sufficient energy to power three lights and a mobile phone charger. As the majority of shacks do not have access to electricity, this considerably reduces expenditure and reliance on paraffin and candles.

Berry Wessels, a master’s student and one of the team members of the iShack Project, explained the need for the iShack in South Africa.

“The South African government faces huge challenges in providing houses and services to the lower socio-economic groups as it cannot keep up with the growing demand and the resultant backlog,” Wessels told How we made it in Africa. “People are therefore expected to wait for when or if the electricity grid arrives and when houses will be built.”

The iShack Project group estimates that slum dwellers can wait an average of eight years for a formal electrical grid to arrive and has entered into various conversations with government on how the iShack can benefit the overall government plan for development.

“The iShack is an interim step towards long term development as it will not hinder the agenda for upgrading but will actually speed up the process of formal development,” explained Wessels. “It is therefore not an alternative to conventional services but an incremental step in the upgrading process.”

The iShack Project also offers to renovate existing shacks with insulation features and install the environmentally friendly solar microgrid. In addition, the team is developing a business model for township residents to undertake maintenance and repairs of the microgrids and sell DC appliances such as fridges and radios.

“If we have proven a viable business model in the next year, then we have the potential to convince government to take the place of donor funding [of] the iShack model for the upgrading of informal settlements,” said Wessels. “With some adjustments to local contexts, we will also engage with our African partners.”