An Italian-Chinese business venture is opening a factory in Ethiopia to produce a practical and affordable electric car in one of the world’s poorest countries. The firm’s manager predicts a big switchover to electric vehicles within the next few years.

Carlo Pironti has small, but revolutionary ideas. The Italian electrical engineer has been traveling the world for years, studying the automobile market. Now he is ready to act. 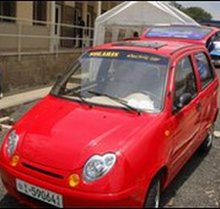 With an investment of about US$600,000, Pironti and a group of mostly Chinese backers are opening a car factory outside the Ethiopian capital, Addis Ababa. Using a Korean-made body and components from 57 different suppliers, Pironti hopes that his Solaris Elettra will make a “tiny” dent in the global car market.

Tiny – as in six cars a week at first, maybe 300 a month, when the plant is operating at full capacity.

But if his timing is right, and recent technology breakthroughs along with rising oil prices indicate that he might be, Pironti says he will be on track to become a major player in an electric car revolution. “Fiat is opening one plant in Sicily. Mitsubishi is ready, Chrysler is ready also. I think the future is in this because petrol prices will increase. You see the case of Greece; they cannot pay the energy bill. They have no more money to import fuel. In the space of two or three years, I think there will be a big revolution,” he said.

Pironti is thinking small. His Solaris Elettra is a full meter shorter than gasoline powered cars because it does not need room for an internal combustion engine or a fuel tank. “The car always will be smaller without sacrificing so much space for the passenger. Now you see this car, one metre is not necessary. It was the place of the motor which is not. There are two batteries. But we can put [them] in another place and make the car one metre shorter without compromising the safety of the vehicle,” he said.

Pironti says his business model is small, too, as in community-based assembly plants dotting the countryside. “Electric is good because it doesn’t need big companies. One 30 person skilled company can produce a lot of cars in a year. So it’s a small scale industry, very affordable by a small group of investors and savers. My business model is to develop assembly plants everywhere for the future,” he said.

Europe will be a major part of the target market for the Solaris Elettra. But Ethiopia, with no proven oil reserves and a potential abundance of electricity, might be a big market as well.

Pironti says the key will be making credit available to low-income Ethiopians so they can afford the initial investment. “Look, 10 years ago, everybody said electric is too expensive to develop. Today it’s a reality in Ethiopia, just a little less than other countries because people have not enough money. But if they can get a credit access model, they will do,” he said.

But in Ethiopia, which still uses heavily polluting leaded gasoline, the savings are tripled. Not only can the country dramatically reduce its dependence on imported oil, but the carbon footprint of an electric car is negligible. And while it costs more than US$5 in gasoline to drive an average car 100 kilometers, the cost of charging an electric car to go the same distance is about 10 cents. – VOA