In our April 2016 piece, ‘Egypt, tough times, some positive steps’ – we cited a private sector person in Cairo telling us an IMF deal was 90% likely. It looks like he was right. Final negotiations on a three-year US$12bn deal with the IMF are due in the next few days, with total loans of $7bn a year ($4bn annually from the IMF, plus World Bank and African Development Bank support). I had planned another visit to Cairo on Monday but officials are going to be rather busy. It is unclear if the Gulf will continue to send $20bn-plus annually to Egypt at the same time.

We have not expected a credit rating change in Egypt in 2016 (Moody’s B3, S&P B-, Fitch B-) but an IMF deal may encourage an upgrade in 2017. We assume the IMF deal will be greeted positively by the Eurobond market (the 2025 bond price is shown below). The bond has been under pressure in recent weeks, perhaps due to the weakening of the EGP in the parallel market. 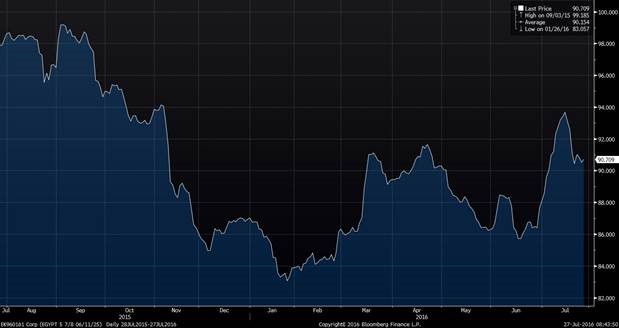 Nigeria and Egypt are leapfrogging each other in doing the right thing. First Nigeria devalues, then lets its currency float. Now Egypt is likely to match that (sooner or later) play by Nigeria and raises it, by bringing the IMF in. That is raising the stakes too much for Buhari – the only reform he hasn’t conceded to is going to the IMF (he’s conceded on electricity, fuel subsidy, currency). But both are moving in the right direction.

Three priorities (in this order) for Egypt

1. Reduce the high budget deficit. As we wrote in April, it would help if Egypt hadn’t had eight to nine finance ministers in six years.

2. Flexible currency. The IMF praised the move to 8.9/$ but says Egypt needs more. We agree (11/$ is fair value and people we met in Cairo expect an overshoot) – see this graph that shows an about 50% spread of informal vs formal currency rate, while Nigeria’s spread is down to 20% and Angola’s is an absurd 70%-plus. Just a few months ago – Egypt’s spread was much less than Nigeria’s. 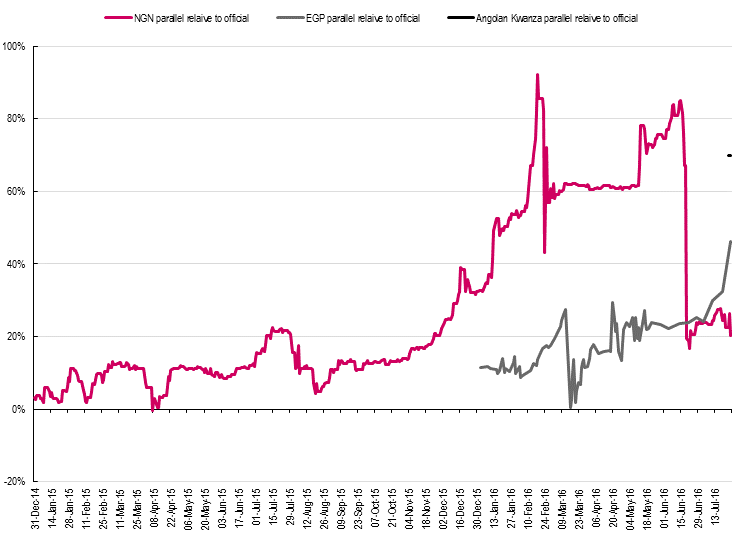 3. Improve the business climate. Mubarak’s regime did a good job in the mid 2000s, but Egypt has lagged since 2010. There is scope to improve this. Past precedent suggests reforms are unlikely to encapsulate the legal system.

The government is likely to be committed to the IMF deal. The new finance minister is the ex-World Bank economist. It is a cabinet of reformers.

Who to prefer out of Nigeria/Egypt? Maybe Nigeria today because the exchange rate is closer to the market clearing rate and long-term fair value (315-320/$ on a 20 year average REER model). In three months, when an IMF deal may be in place, perhaps Egypt. It has an economy better able to benefit from devaluation (via electricity and manufacturing).

But really, the key point is that Africa is back – with two of the three biggest economies now making themselves investable again after an overly-long period where foreign exchange policy deterred investors. Frontier investors have preferred Asia and Argentina – for good reason. But as we progress through 2H16, it is worth re-examining Africa again. Elections in Zambia and Ghana may prove to be an additional kicker too.