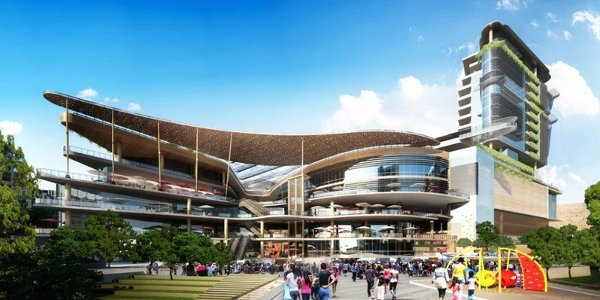 An artist’s impression of the Two Rivers Retail Centre in Nairobi, expected to open this year.

Formal retail has been growing steadily in East Africa in recent years, with both local and international retailers eyeing opportunities in the region. There has been significant investments into new shopping centres, particularly in big cities such as Nairobi, Kampala, Kigali and Dar es Salaam.

At the East Africa Property Investment Summit, held in Nairobi last week, experts discussed the region’s retail real estate industry, the entry of international players and whether the market is large enough to sustain the current growth in modern retail.

Nairobi hosts the majority of new shopping malls that have opened in the region lately. According to research by Britam Asset Managers, the Kenyan capital now faces an oversupply “in all types of retail space”. Over the last 12 months, three large shopping malls have opened in Nairobi – Garden City, The Hub Karen, and Westgate (renovated following the 2013 terrorist attack). Another development, Two Rivers Retail Centre, is anticipated to start trading by the end of 2016.

“Beyond the Two Rivers mall, expected to open by the end of this year, no further retail space will be required in Nairobi, as there will be oversupply. However, in areas like Naivasha, Kisumu, Nakuru, Nanyuki and Mombasa, there are opportunities for strip malls that range from 1,000 to 10,000 square feet,” said Kenneth Kaniu, CEO of Britam Asset Managers.

But not everyone is of the view that Nairobi has reached a saturation point. According to Robert Broll, lease consultant at the Broll Property Group, the uptake of retail space in Nairobi remains positive.

“I think there is enough depth in the size of the Kenyan market to support all the malls that have either opened or are under development. I think the retail market will only grow further from here,” explained Broll.

Michael Mugasa, partner at professional services company PwC Kenya, noted there is opportunity to develop more shopping centres closer to residential areas within Nairobi to avoid situations where consumers have to travel long distances and are stuck in traffic trying to access malls.

“What is going to be the bigger challenge for all these malls is: do we have enough retailers to take up space? We need to develop local retailers so there are economies of scale for them to grow into multi-locations,” said Gikonyo Gitonga, managing director of Axis Real Estate. “The challenge for international retailers is – when they come into Kenya are they able to get four or five locations?”

Regionally, Kaniu argues Tanzania holds opportunity for retail property, but remains a “difficult” market to penetrate due to foreign land ownership regulations and the tax regime.

And although Rwanda has a supportive regulatory environment, Broll noted it only has a small number of consumers with disposable income sufficient to support modern retail.

According to Mugasa, formal retail in the region has been boosted by attempts by regional governments to decentralise economic growth, which has led to the rise of small towns. Technology has made marketing and information transfer easier, while the development of mobile money, convergence of banking, and the adoption of credit cards has eased transactions.

“[Previously], if you went to Uganda and drove from Busia to Kampala, it would all be rural in between. Now what you increasingly see is a lot of upcoming small towns becoming expanding urban centres,” said Mugasa. “It is predicted that most of the cities in East Africa are going to grow by over 100% in the next 15 years. You can imagine what opportunities that creates for the players in the consumer and retail sectors.”

Shopping malls in the region today feature a mix of local and international retailers. There has been a growing interest among international brands in recent years – from supermarkets, to global restaurant chains to fashion companies.

“We have seen quite a number of South African retailers looking to enter the Kenyan market, which is considered a low-hanging fruit, probably the most developed retail market with the most number of shopping centres outside of South Africa. The consumer here already has an international habit of buying goods and services from shopping centres unlike West Africa… in Nigeria and Ghana where you really have to educate the consumer public to start visiting shopping malls,” said Broll.

However, Kevin Teeroovengadum, CEO of Mauritius-based property investment company AttAfrica, urges stakeholders to be realistic about the entry of more international retailers.

He noted that some international chains that had announced plans to open at new malls in Nairobi pulled out at the last minute.

French chain Carrefour is expected to open its first of two stores in Nairobi in a matter of weeks. Initially, PwC’s Mugasa expects the retailer to easily attract shoppers, mainly out of curiosity. Sustaining interest over the long-term will, however, depend on other factors.

“There will be the fact of novelty – everybody would want to say they have shopped at Carrefour. The key challenge is how then do they sustain that in the long term. And how do they increase their footprint because you can’t have only two stores around the city and be a dominant brand,” said Mugasa. “The game changer in East Africa is supply chain. Whoever wins the supply chain management, wins the game.”

Domestic retailers not sitting back

But Carrefour will likely face tough competition from local grocery chains that, Broll says, operate “at a very sophisticated level”.

“I don’t think we should discount the local Kenyan retailers. They are not sitting back and just watching and waiting for this big grocery chain to open. I’m sure they have got their strategies in place and I think ultimately it will be good for consumers. There will be a bit of a price war and prices will come down to the benefit of shoppers. It is certainly going to be interesting to watch the entry [of Carrefour] and how they position themselves and how the competition reacts,” said Broll.

Gitonga explained that international retailers that have already entered the market are adding value in the industry, pushing local companies to improve their offering.

“We don’t need to overrate international retailers because local retailers are also doing quite a good job. It is very interesting that 60% of Kenya’s population [are young people]. These people are interested in product and price. They could be aware of brands, but they don’t have brand loyalty – they lose interest. I remember when KFC opened their first shop the queues were very long. Nowadays you walk in easily.”