“I love challenges. When someone tells me I cannot do it I work even harder and prove them wrong,” says Kenyan entrepreneur Catherine Mahugu. 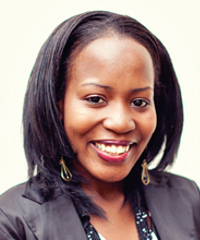 In 2012 Mahugu partnered with US entrepreneurs Ella Peinovich and Gwendolyn Floyd to start Soko, an online store that enables craftswomen in developing economies to become global entrepreneurs. Through the e-commerce platform, artisans can sell their handcrafted jewellery to consumers worldwide using basic feature phones.

Soko has attracted funding from investors and won numerous awards internationally for its efforts in helping artisans participate in the global marketplace.

Mahugu co-founded Soko while she was studying Computer Science at the University of Nairobi. The young entrepreneur attributes her interest in sciences and technology to her upbringing. Her father had an engineering background and “was always fixing things in the house”.

She notes that although “being a young woman in a male-dominated industry can work against you”, she chooses not to allow her gender and age to stop her from accomplishing her dreams.

“I just ignore all the noises in the background and do what I enjoy.”

Mahugu says Soko was inspired by the challenges artisans in developing countries face which limit how much they earn from their trade.

“If you go to most informal settlements you will notice the majority of the women do beadwork but they don’t really earn a lot of money. There are so many economic discriminations they face. We wanted to transform these micro-entrepreneurs into global entrepreneurs by giving them exposure and visibility through the Soko platform.”

Soko works with 200 artisans in Nairobi, Kenya’s capital. It is also piloting in Latin America and India, a project made possible by the USAID Development Innovation Venture grant.

Artisans who want to work with Soko register with the company and upload photos of their products on the e-commerce platform. When a purchase is made, Soko uses its boda (bicycle operators) system to collect the items and handle the shipment. Products often reach the consumer within 10-15 days.

Mahugu says Soko has been “making some good sales”, noting that the company began selling in Kenya to meet growing demand for high quality, handcrafted jewellery.

The major challenges Soko faces are power interruptions and unreliable internet which makes communication and coordinating activities among the company’s global team difficult. Soko has also had to change its model along the way to attract and retain customers and ensure efficiency in its operations.

“When we started out we knew we were a technology company. However, in time we developed a service layer to ensure that we have the stickiness of the consumer and artisan. We had to be creative enough to provide other services other than just being a technology company. That was a shift in our model but we have been able to tackle it very well.”

The Soko team plans to expand the company to Latin America, Asia and other parts of Africa.

Despite the many challenges the team has faced, Mahugu says giving up has never been an option.

“As co-founders we are in this for the long haul. Giving up is not an option. I know most people in the world who have made it went through failure but that did not stop them. I would say some of the challenges we have faced have made us stronger and more resilient.”

Be proud of your achievements

Running a startup, Mahugu says, is a great learning experience and entrepreneurs should be open-minded and willing to learn from others and their mistakes.

“I have learnt skills ranging from finance to government policies that relate to opening a new business and even legal issues.”

She advises other women in male-dominated industries to believe in themselves and surround themselves with mentors and peers they can learn from and lean on when the going gets tough.

“Women don’t give themselves credit for their successes. Instead they attribute it to external factors versus men who say: ‘I did this.’ Women should be proud of their achievements.”

African youth, she adds, should overcome their fears and plunge into entrepreneurship, adding that investing in an area one is passionate about, working hard and taking calculated risks eventually pays off.

“I know most people would prefer having job security because running a startup comes with a lot of ups and downs. But when you take the risk you get the gains. So people should just be open-minded… and take the deep plunge. Africa is the next economic frontier and entrepreneurship will drive economic growth.”