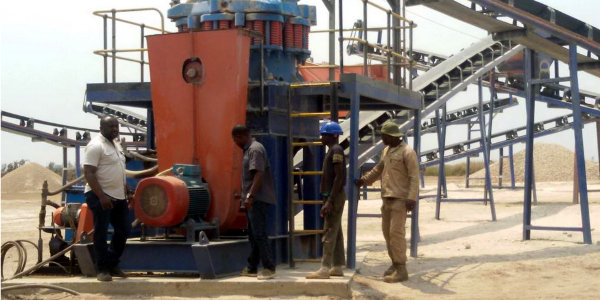 Workers examine new machinery in use at the pioneering mega-farm at Boukanga Lonzo park in Democratic Republic of Congo, Aug 8, 2015. (N. Long / VOA)

The Democratic Republic of Congo is trying out a large-scale agricultural plan that is, to say the least, ambitious. The government plans to develop one mega-farm of 50,000 to 150,000 hectares per province – producing food for local consumption and also export crops. The government says the aim is to promote food security.

The park at Boukanga Lonzo currently has 5,000 hectares under cultivation. The site is on a plateau, and crops already stretch as far as the eye can see.

Isaac Saleh, who works as an economist at the prime minister’s office, says they are harvesting about 3,300 hectares of that land.

Most of the production at these mega-farms will be mechanised, but there will be some 7,000 jobs created on the farm in the near future, according to the government.

On 1,000 hectares, the employees will be working full-time to cultivate and harvest vegetables irrigated by sprinklers rotating on 20 huge pivots.

“Each pivot is the length of a football pitch [field],” said Saleh, “and it’s big enough that vegetables under the pivot can be planted and harvested every day.”

The DRC government says the food is intended for Kinshasa, and should help to cut down on the US$1.5bn the DRC pays each year for food imports.

Under these plans, Boukanga Lonzo also will be a new town, with processing industries and many other jobs. The government says it already has spent $100m on infrastructure for the park and the town, mainly on a power grid, a water-pumping station and productive machinery.

John Ulimwengu, the prime minister’s chief agricultural adviser, told VOA the agro-industrial park model will be replicated in other provinces.

Currently the government is the majority shareholder at Boukanga Lonzo, and it is leasing land to investors for 25 years.

Ulimwengu explained why the government is concentrating so many resources on specific farms.

An agronomist at a development centre near Boukanga Lonzo, Clement Mbekia, is critical of that approach.

“The $100m is a colossal amount that could have been spent on local communities,” said Mbekia, “and that would have served the population. If the investment they have made in agro-industrial parks had been spent on small-scale family farmers you would be seeing more high-quality staple foods in the market.”.

But Ulimwengu argues that’s not realistic. “Let’s be honest, if 80% or so of your population is involved in agriculture, and they cannot feed 30% of your population, it means it’s not done in an efficient way, so there are a lot of them that should be doing something else,” he said.

Beyond having up to 11 mega-farms, the government also plans to have smaller agricultural development centres of 200 to 300 hectares across the country. – VOA