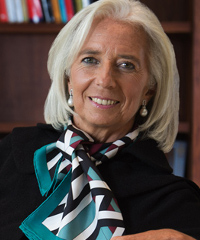 East African countries are set to trade in a single currency by 2015 following last month’s signing of the monetary union protocol by the region’s heads of state.

Speaking to business leaders in Nairobi, Lagarde told EAC states to “hasten slowly” and draw upon the experience and lessons learned from other regions’ mistakes and omissions.

“As a member of the Monetary Union of Europe, I have to tell you that it is a very ambitious exciting project, [but] one where, as Aristotle would put it, you should hasten slowly in order to make sure that all the steps are taken and all the boxes are checked.

“Don’t rush. Make sure that you learn from our mistakes and that the East African Monetary Union can actually teach the Europeans how to do it right.”

In 2007, East African heads of state resolved to have a common market and a single currency by 2012. While the common market protocol which allows free movement of people within the EAC block came into effect in July 2010, the establishment of a monetary union has delayed and attracted criticism.

Sceptics have often argued that studies should be undertaken on the implications of transferring monetary powers to the regional level, insisting that after the implementation of the monetary union, any problems would jeopardise the entire region.

According to EAC leaders, a single currency will enhance trade among the five countries, reduce transaction costs and strengthen regional integration among Kenya, Tanzania, Uganda, Rwanda and Burundi. The East African monetary union is the third pillar of the region’s integration.

“Business will find more freedom to trade and invest more widely, and foreign investors will find additional, irresistible reasons to pitch tent in our region. Such advantages will no doubt result in increased investment and further transformation of East Africa,” said Kenyatta.

Lagarde said the monetary union is an opportunity “but also a major challenge” and the process needs to be managed carefully. She pledged the IMF’s support in providing technical assistance and advice in the process.

“There are multiple lessons, multiple experiences to learn from, whether it is the European Monetary Union, the Caribbean Union, the West African Union. From all those unions there are mistakes, pitfalls, gaps [and] omissions that can be learnt from,” said Lagarde.

The IMF boss noted that regional integration has opened up new markets, supported the emergence of a middle class and enabled domestic demand to become an engine of growth.

She urged the member states to deepen the integration process and ensure that the removal of tariff barriers is not replaced by reinstallation of non-tariff barriers.