For the past 18 months, two internationally recognised American brands – Domino’s Pizza and ice-cream parlour chain Cold Stone Creamery – have been expanding their footprint across the Nigerian market. 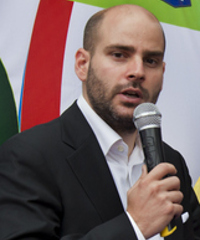 The franchise rights for these brands in Nigeria are owned by Eat’N’Go, a company focused on bringing food and beverage brands to Africa.

Five Domino’s Pizza stores have already been opened in Nigeria and according to Jean-Claude Meyer, CEO of Eat’N’Go, the group has two other stores currently under construction. “We are looking at opening five or six stores [for Domino’s Pizza] this year,” he told How we made it in Africa.

While Domino’s Pizza is not the first pizza delivery service to enter the Nigerian market – South Africa’s Debonairs Pizza brand expanded into the market a few years earlier – Meyer said Domino’s Pizza is technically a first mover in the country. Debonairs currently only has four stores in Nigeria which Meyer said is not enough to actually develop the industry and market. “I think they only had three stores when Domino’s entered the market,” he added.

However, while Meyer said having a first mover advantage in Nigeria is a huge opportunity for international food and beverage brands, it also comes with challenges such as introducing new tastes and products into the Nigerian culture.

“As they say there is a first mover’s advantage but then again it is now about educating the market. On the one hand the fact that there is [almost] no competition is good but it is also bad because we now have to do all the work of educating people on how these [international brands offer] edible food and a suitable alternative for their meals,” Meyer explained.

“We have made sure the quality, the pricing and the marketing is done as correctly as we can to try and convince the market to have a taste of food that they are not used to.”

He added that one strategy they have adopted with Domino’s Pizza is to “Nigerianise” the product. “We have been able to roll out a couple of pizzas, for example the Chicken Suya pizza, which is a good seller and accepted very well in the market here.”

The chain also offers Jollof rice, a popular West African dish, as a pizza topping. Meyer said adapting the menu to local tastes is a crucial strategy for attracting consumers. “It has enabled us to convince part of the Nigerian consumers to try us because at least the flavour will be somewhat similar to what they know.”

According to Meyer, another challenge of being a first mover in Nigeria often means that these companies become responsible for developing the industry that surrounds them. For example, Eat’N’Go has had to invest in developing the local supply chains in order to get the ingredients required to make the products for Domino’s Pizza and Stone Cold Creamery.

Meyer explained that the cost of importing ingredients is extremely expensive and it can take months for them to get goods from elsewhere in the world. “Developing the local supply chain is critical,” he emphasised.

“So we are definitely looking at the local supply chain and for the past 18 months that we have been operating we have been sourcing increasingly more of our resources from the local market. There are some that are not yet available locally but we are definitely working with some investors to [improve] that. For example the [base ingredients] for ice-cream; it is really not produced in Nigeria much – not in the quantities that we require and not in the qualities that we require.”

However, Meyer added that all of the ingredients for Domino’s Pizza are now sourced in Nigeria, although this did require investment in the supply chain. For example, some basic items, such as pre-cooked chicken, just weren’t easily available in the market.

“Therefore none of the chicken suppliers here had any of the machinery required to pre-cook the chicken for us. These are some of the investments some of our partners have made and we are thankful that they did,” he continued.

In addition to the cost of developing the local supply chain, Meyer said both Domino’s Pizza and Cold Stone Creamery face the high cost of electricity and have to invest in backup generators, boreholes and water treatment facilities in all their stores.

In the 18 months since the two American brands first entered the Nigerian market, their expansion has been far from timid. For example, Cold Stone Creamery has already opened eight stores and Meyer said there are three more under construction.

“We are rolling out decently fast. Not very fast either. Let’s face it, KFC has gone much faster than we have… I don’t believe we will be at 23-25 stores after three and a half years but that is not our goal. KFC is selling chicken and chicken is an obvious seller in Africa. But pizza is not the same and we are still in the process of educating people a year and a half after rolling out… So we want to ensure quality over quantity and make sure that the stores we roll out are carefully planned and the areas are carefully selected,” he concluded.