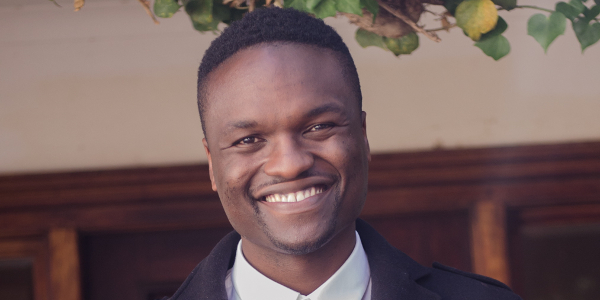 Near 30 years ago Kali Ilunga’s Ghanaian mother sent a telegram to his Congolese father to say he had just been born and they would be arriving in the Congo in three days. But when they arrived at the airport his father was nowhere in sight – because the telegram actually arrived three months later.

Today mobile messages can be sent instantly over WhatsApp, accompanied by two blue ticks to indicate that it has been both delivered and read by the end recipient.

“And instead of US$40, it costs nothing. And instead of having to go from Ghana to Ivory Coast to Congo because it’s French, it can go from device to device. That is incredible,” notes Ilunga.

Speaking at a TEDxGaborone conference towards the end of last year, he highlighted how “disruptive” innovation has the means to improve lives of ordinary people, especially in the African context where challenges are typically heightened.

Ilunga is an entrepreneur and motivational speaker with a couple of businesses under his belt. Today he is the founder of SeeSayDo, a mobile platform that measures and rewards the attention employees and customers pay to communications. He also runs a digital solutions agency that helps big brands develop relationships with consumers in South Africa, Ghana, Nigeria and Kenya.

One of his first businesses was a platform that taught users how to drive via their mobile phone. The idea came to him after failing his own driver’s test four times and realising there were many others in the same position.

“It turns out 1.95 million people at any given time in South Africa will be [registered for their] learner’s and driver’s. And there is about a 50% failure rate.”

His idea later evolved into a mobile phone platform that provides young consumers with a variety of educational content – from personal fitness training to studying for Matric to branded content that deals with social issues.

What it means to be disruptive in Africa?

“Disruption, in short, creates a product that addresses a market that previously couldn’t be served,” highlighted Ilunga.

“The thing about disruption that is key, particularly to us as Africans, is to realise that every time disruption happens the incumbents, the established businesses, don’t know what to do… [They] cannot compete.”

However, he noted this can also have a negative impact in Africa.

“We live on a continent where we are dependent on our incumbents, whether it’s mining, transportation or housing. You can pick an industry and [find] we have parastatals and monopolies that we are dependent on to create the jobs and growth that feed our dads, moms and siblings. It’s cool to say that disruption kills the incumbents, but what does this mean for our families on a continent where the ‘dark side’ of disruption will hurt more than anywhere else?”

For example, Uber’s technology might hurt the average taxi driver’s business – but a taxi driver in New York is more likely to have access to another job than in Nairobi, where unemployment is much higher. “Disruption is scary in an African context,” he noted.

So how should innovators pick ideas that matter for Africa? According to Ilunga they should be based on empathy and consideration towards the needs and lifestyle of those who need change most. For example, while there are many great apps out there, what use do they have if many do not have enough airtime or data to utilise them?

“The problem with outsourcing our innovation is that we are dealing with people who don’t recognise our restraints. Western innovators don’t get our restraints.”

Ilunga advises Africans to develop ideas that are empathetic and impact the majority. “Look at the problems we actually have and look intently at solving them – problems that are beyond the college boy’s desire to fix a photo with a cool filter, but actually meet the needs of people.”

He added that aspiring innovators should also practise coming up with ideas. Instead of developing three ideas, as business schools have often encouraged in the past, they should develop 1,500 “because the best of 1,500 ideas is more likely to be better than the best of three ideas”.

“And lots of those will be failures but some of those ideas will hone your ideation skills.”