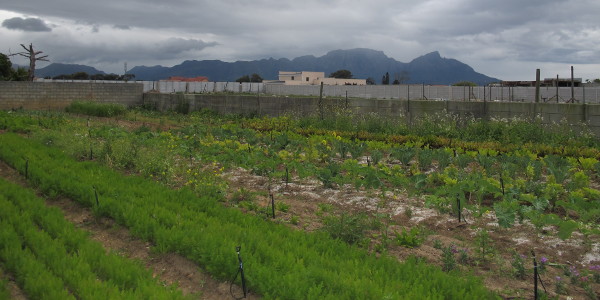 For a place that covers 3,000 hectares, the Philippi Horticultural Area (PHA) is easy to miss. Yet, if you know the turns to take off Cape Town’s M17 highway, an urban neighbourhood quite suddenly becomes farmland. Paved streets turn into dirt roads, bordered by neat rows of leafy vegetables; open fields appear, dotted with ponds.

The urban farms that make up the PHA are part of the Cape Flats, and only 20 minutes from the city centre. A densely populated area in Cape Town, the Cape Flats is home to townships, informal settlements and century-old neighourhoods.

It is here, surrounded by residential suburbs – in what seems an unlikely place for one farm, let alone several – that half of all of Cape Town’s vegetables are grown. The produce is sold through retail giants Woolworths, Pick n Pay and Fruit & Veg City, the Cape Town Fresh Produce Market (CTFPM), and informal traders.

“Now, why is this land so productive?” asks Nazeer Sonday, a farmer in the area and convener of the PHA Food and Farming Campaign. I’ve joined him on a tour he’s leading for four other people, mostly gardening enthusiasts. “It’s because the land that we are on is smack-bang in the middle of an aquifer.”

“An aquifer is a dam that’s underground. It’s like a sponge that holds water. Two of the main advantages are, one: You hold water without having to construct anything above, and two: You have almost zero evaporation, like with a dam.”

The aquifer provides water to the farmlands, which in turn protect the aquifer, allowing water to filter down into the underground system. In winter, when Cape Town experiences its highest rainfall, the fields flood, attracting water birds such as ducks and flamingos.

A second thing the PHA has going for it is how close it is to the centre of town. This means transportation costs – which account for up to 8% of the shelf costs of food in South Africa – are lower. Data from the Cape Town Fresh Produce Market (where fruit and vegetables are sold in bulk each morning, starting at 4am) illustrates this: its fresh produce prices are on average 3.9% lower than national prices, a result of the proximity of the farms that supply it.

The area also benefits the city’s builders. “You ask any builder he’ll tell you, Philippi sand is the cheapest sand you can lay your hands on,” Sonday says as we drive beneath an arch of water created by one of the farms’ sprinkler systems. 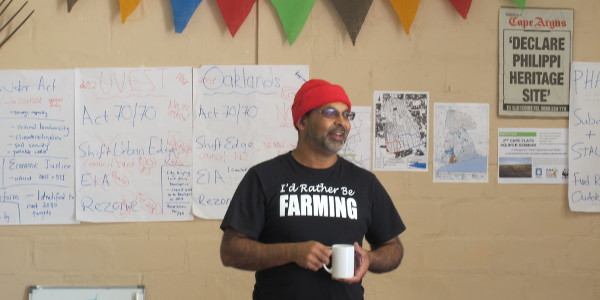 Nazeer Sonday, convener of the PHA Food and Farming Campaign

He explains that sand itself is not an expensive resource, but transport costs can be. “The further away you go for sand, the more expensive building is going to become.”

“This area built the city, you know.”

The nomadic Khoi and San once used the land of which the PHA today forms part for grazing their animals and hunting for food. Later, various groups of European settlers considered different uses for the Cape Flats.

One of the boldest ideas, perhaps, belonged to Dutch colonial administrator Jan Van Riebeeck. In 1656, he sent an investigating expedition to determine whether a channel could be dug across the flats, connecting the two bays on either side of the Cape and turning Cape Town into an island.

Needless to say, this idea was abandoned. But it did result in the following diary entry: Van Riebeek recorded that the expeditioners were “kept from sleeping by the many hippopotami, lions, tigers and other wild animals, who were often heard roaring close to their tents.”

As unlikely as it was that tigers had appeared in Southern Africa, wild animals that were found in the area later attracted the British colonial elite, who used the flats as a place to hunt for sport.

The Germans who settled here in 1865, and are largely credited with farming the land, had to deal with these hunters, whose horses would, according to Bete und Arbeite: The Philippi Germans and their Story, “destroy in minutes what had been cultivated in weeks.”

The farmers persisted, selling their first produce at a shop called the German Bazaar, on Long Street: still today a busy road in the heart of Cape Town’s CBD. 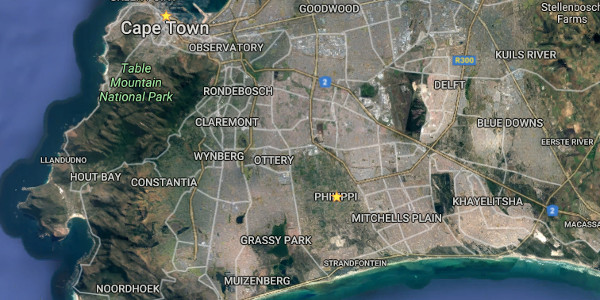 These days the PHA farmers face more formidable opponents than horses. Consol Glass has applied for a mining licence, looking to dig up valuable silica sand, and a property developer has proposed a scheme made up of commercial housing, a shopping centre and private prison on land currently used for farming. Sonday says that this development would destroy a third of the PHA’s most productive land.

Not only would this put an end to much of the area’s food production, but as the farms are the last feeder area for the aquifer, it would limit the city’s water supply and could lead to flooding. To build on the land, the potable water below ground needs to be filled with rubble to create a foundation. It would also affect more than 4,000 farming jobs.

This is where our guide comes in. The PHA Food and Farming Campaign, which Sonday leads, is fighting to stop development, mining or prospecting in the area.

Sonday has a long history with Philippi. His parents and grandparents were from the area, where Sonday, too, was born. The family was relocated when their neighbourhood was declared “white” by the Apartheid government.

In 1991, though the Group Areas Act had not yet been rescinded, Sonday decided that he wanted to buy land in Philippi. With the help of his father’s white lawyer, he formed a company of which the lawyer was a majority shareholder. After democracy in 1994, the lawyer sold his share back to Sonday for one South African rand.

By the time Sonday is recounting this story to the tour group, he has been joined by his colleague Susanna Coleman, an optometrist in the city who has been working with the campaign. When Sonday bought the farm, she adds, “His mom just laughed and said ‘Oh, well you’ve gone back to the piece of land where your umbilical cord is buried.’” 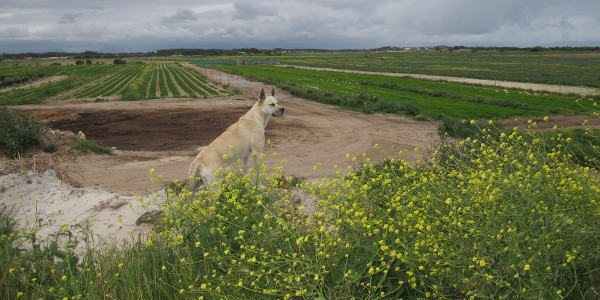 One of the largest farms in the PHA

The German farmers left a key legacy in Philippi, and one that Sonday and Coleman hope to use to convince Cape Town’s government that it should be protected.

The Germans developed farming methods over three generations to adapt to the extreme weather conditions in the area, explains Coleman.

One of the methods inspired by heritage farming practices is no-till farming. This means that once beds are established, they’re not re-tilled – crops are cut rather than picked and re-planted, leaving organic matter in or on top of the soil, and enriching it for the next crop.

No-till farming also contributes to carbon sequestration – removing carbon dioxide from the atmosphere and trapping it. It works like this: carbon dioxide is ‘trapped’ by plants, which use it to grow, and then buried (the CO2 remains trapped in the organic matter that is left in the soil).

Coleman says that were the area to be farmed using only no-till methods, “You could sink every single carbon emission of the city into the soil of the PHA.”

Sonday uses the no-till method on his farm, where he grows carrots, strawberries, lettuce and potatoes, as well as breeding tilapia. He plants indigenous flowers on the edges of the vegetable beds to attract bees, which pollinate some crops, and trap further carbon dioxide. 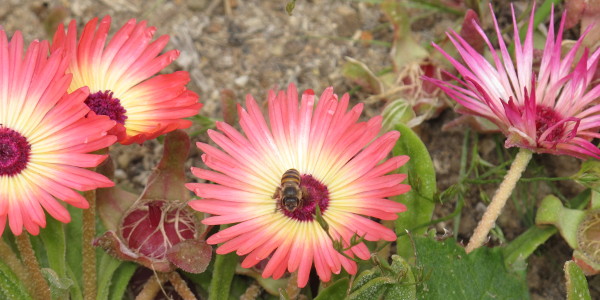 Vygies, an indigenous flower, are planted on the edges of the vegetable beds to attract bees.

Inviting the city in

To attract city-dwellers to the area and raise awareness about (and perhaps even affection for) the PHA, Coleman and Sonday are starting a farmers’ market in Philippi – the first will be held in December this year.

An added appeal of the market, besides being able to buy fresh, seasonal fruit and vegetables cheaply, will be the chance to purchase varieties not commonly found in major South African retailers. One of these growing on Sonday’s farm currently is broad beans – a legume that may prove attractive to the city’s chefs (and amateurs), as it’s commonly found in British and American cookbooks.

Finally, the pair and the other members of the PHA Food and Farming Campaign are trying to have the area declared a heritage site, which would mean that it will be protected against development. They want to label PHA vegetables, creating a brand like South Africa’s Elgin apples, or California’s Napa Valley wine.

The expansion of cities will always mean a threat to farmland. Philippi’s farmers are banking on being able to overcome this, inviting the city in rather than have it arrive at the doorstep and plant a flag. To an outsider, it feels like a model at a science fair: The Sustainable Town. Environmentally friendly and rich in water, big farms working with small, and an intricate history. All this, and flamingos too.