According to the World Bank and International Finance Corporation’s Doing Business 2010 report, the Central African Republic (CAR) ranks 183 out of the 183 countries included in the rankings, making it one of the most difficult places in the world to do business.

Improvement in the Doing Business 2010 Starting a Business indicator was offset by a decline in Dealing with Construction Permits indicator. The profit tax in CAR, at 176.8%, remains higher than in any other country. The total tax rate, at 203.8%, is 5th highest in the world, according to Doing Business 2010. CAR also ranks at the bottom in the Closing a Business indicator due to the cost of closing a business (76% of estate). CAR also falls in the bottom 1% for some of the Trading Across Borders indicators – the cost to export a container is US$5,491, well above the regional average of US$1,941 per container. 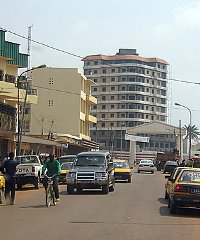 A street scene in the Central African Republic's capital, Bangui

Despite its poor ranking in the Doing Business 2010 report, the economic outlook for the former French colony remains modestly positive, provided that stability can be maintained and the country continues to satisfy the conditions set by donors for ongoing support. The scale of its reliance on outside aid is highlighted by the scale of the 2009 fiscal deficit – an estimated 7.1% of gross domestic product (GDP) on the basis of domestic revenues, but only 1.9% when the impact of grant aid is factored in.

Real GDP growth for 2009 is projected at 2.4%, with an encouraging 3.1% in prospect for 2010. With a small population of around 4.5 million and both savannah and rainforest terrain, the country has the potential to be self-sufficient in food and to generate foreign reserves from exports of cotton, coffee and timber. However, as a landlocked state, it faces heavy transport costs which undermine the competitiveness of export sectors.

The main exports will therefore remain diamonds, supplemented in the longer term with uranium. French mining and energy company, Areva, is currently developing a uranium mining project in the Bakouma region, 900 kilometres northeast of the capital Bangui. The company holds an exploration permit for deposits in the Bakouma zone. Start-up of site operations is slated for the next few years, before gradually achieving full production from 2014/2015.

Consolidation of the fragile peace process will remain a key challenge for CAR until it has successfully negotiated the presidential and parliamentary elections scheduled for 2010 and the potentially awkward postpoll haggling over the share-out of power and position.

Meanwhile, modernisers committed to peaceful non-sectarian politics, led by the former prime ministers Martin Ziguélé and Gabriel Koyambounou, are now firmly in charge of the largest opposition party, the Mouvement de Libération du Peuple Centrafricain (MLPC). Ziguélé, adopted as standard-bearer for the presidential race, will probably be the principal challenger to Bozizé, as he was in the 2005 poll.

In Bangui, the civilian opposition scene could be ruffled by a comeback by former President Ange-Félix Patassé, who has said he may stand in the presidential race. If Patassé, who founded the MLPC, splits the vote in the party’s northwestern heartland that would help Bozizé withstand the otherwise potentially serious challenge from Ziguélé.

CAR is slowly re-establishing the bases of financial stability and development with the support of the International Monetary Fund (IMF) and European donor states which concluded that the country could be saved from becoming a failed state. However, huge problems remain to be tackled. Security has yet to be fully restored in much of the country, even if the smaller rebel groups are too weak to pose a substantial threat to Bozizé.

The situation of other rebel groups remains in flux. In May, the Chadian authorities detained a former minister, Charles Massi, who was trying to slip into CAR to meet fighters from his own small rebel faction, the Convention des Patriotes pour la Justice et la Paix. Abdoulaye Miskine – who once headed the personal militia of Patassé – pulled out of the peace process early in 2009 after failing to win government posts for his protégés. Massi was released in return for promising not to resume hostilities against Bozizé – who is supported by Chad’s President Idriss Déby Itno.

This does not mean violence has definitively ended. UFDR troops, now garrisoned near Birao in the far north, were attacked by unidentified gunmen in June. In September, with Bozizé’s permission, Ugandan troops entered eastern CAR to hunt Ugandan Lord’s Resistance Army fighters who have been hiding there and operating a diamond mine.