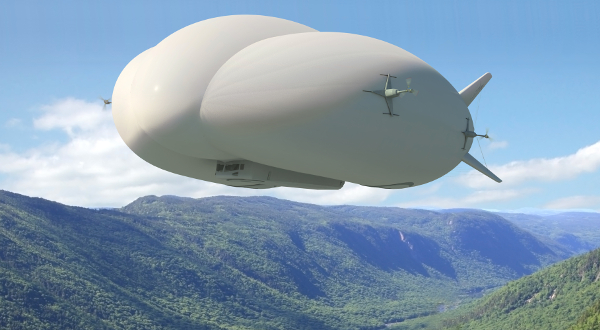 Lockheed Martin’s Hybrid Airship can be used to transport heavy cargo to and from hard-to-reach locations, and is being targeted at Africa’s mining industry.

The recent Investing in African Mining Indaba held in Cape Town saw a number of companies showcase innovations for the industry – from new drilling and blasting techniques to wearable technologies.

One of these is a blimp-like aircraft, called the Hybrid Airship, which can transport heavy cargo to locations lacking road and rail infrastructure. The technology was developed by Lockheed Martin, an American company mostly focused on producing aerospace and security technologies for the military. However, its Hybrid Airship, currently undergoing FAA certification, is being targeted at the oil and gas and mining sectors, and is expected to be operational by 2018.

They are filled with helium, as opposed to highly-flammable hydrogen which was responsible for the Hindenburg disaster in 1937, and are roughly the size of a football field (about 82m long). They can carry loads of 21,000kg and 19 passengers. Each aircraft is fitted with an air cushion landing system, and therefore doesn’t require a runway or airport infrastructure. It can land in terrains of sand, rock, grass, ice, mud, snow or open water.

While its transportation costs do not compete with road and rail, it does compete with helicopters used to transport weighty loads to and from hard-to-reach areas. According to Rob Binns – the CEO of the company mandated to exclusively sell the crafts, Hybrid Enterprises – it is about eight-times cheaper than using a heavy-lift helicopter to move cargo.

“Eight-percent of your lift is from the helium… If you think of an aircraft or helicopter, you are powering it with engines all the time. If your engines stop, they fall to earth. But with the Hybrid Airship 80% of your lift is free so the engine power you need can be very efficient,” he explains.

“And it has about one-third of the carbon emissions compared to an aircraft or helicopter flying with the same amount of cargo.”

It can also travel much longer distances. At a cruise speed of 110km/h the Hybrid Airship can travel up to 2,600km, while the average heavy-lift helicopter has a range of less than 10% of this.

“It can go faster but then you start to burn more fuel and part of the idea here is to be more fuel efficient. So at 110km/h you are going at a 2,600km range. But if you slow down to let’s say 50km/h you could fly all away around the earth non-stop.”

And while the rising price of helium might add to operational costs, Binns says it is minimal.

“They come filled with helium in its price and you only need to top up the helium 1% per year. So it’s a very minimal amount and there really isn’t a shortage of helium. It’s just a supply and demand [issue]. In the natural gas production process, helium comes out of the earth and 95% of it is just wasted. And if you think where we use helium; there are birthday balloons,” he notes.

“So the supply is there, it’s just that demand is at a relatively low level.”

Since transporting cargo via the Hybrid Airship is only more affordable if there isn’t any road infrastructure available, the solution is being targeted at mining companies operating in hard-to reach areas, such as those in Canada that can only be accessed a few months a year by ice roads. But in Africa the technology makes more sense for greenfield projects where road or rail infrastructure hasn’t yet been built.

“When we do analyses for companies we see that the biggest saving for them is to avoid building infrastructure. If you think of the mining industry – they have had a hard time, laid off people, cut costs, cancelled projects that weren’t cash-flow positive and are now looking at how to do business smarter,” he continues.

“And in the industry, when you build a new mine you need infrastructure. [Miners] are putting out huge amounts of cash before they see any revenue, so this is a way for them to spend far less and use it as a form of infrastructure to start generating revenue more quickly.”

He adds the current economic climate – characterised by low commodity prices – has both pros and cons for the product. On the one hand, the Hybrid Airship (with a price tag of US$40m) might have been an easier investment during the industry’s booming times. However, he argues that during challenging times, mining companies are more incentivised to rethink their business model and adopt innovative strategies and technologies to cut costs.

“So in a way it’s kind of a good time because people are more open-minded to new ways of doing business,” argues Binns.