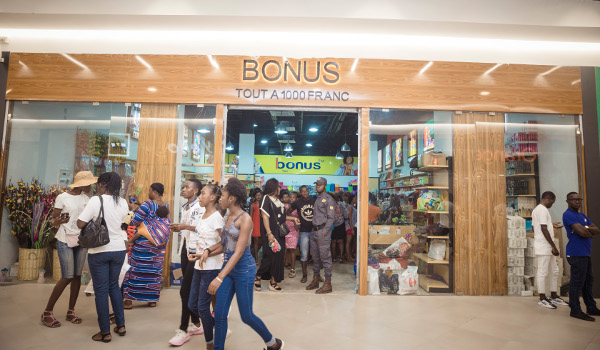 Showcasing a resurgence in the Côte d’Ivoire economy, the opening of the nation’s most extensive shopping mall is transforming lives in the commercial capital Abidjan.

Spread across three hectares, Cosmos Yopougon is the most expansive shopping centre in the country and, significantly, bucks the format of other large-scale malls that have mushroomed in the wealthier parts of sub-Saharan African cities. Yopougon, the most populous district of Abidjan, is predominantly a lower middle-class area where most consumption is through informal retail and street stalls. Some of the retailers in the mall’s kiosks are former stallholders. The mall has exceeded half a million shoppers since opening six weeks ago, a record for a commercial centre in Côte d’Ivoire.

“The impact here goes beyond numbers, or even the jobs we’re creating or the financial returns for our investors,” said Hafeez Giwa, managing partner of HC Capital Properties, the London and Abidjan-based developer and lead local investor in the US$30m project. “We met one woman entering a supermarket for the first time who was astounded to find fresh fish and meat alongside so many other groceries. She is a consumer who was historically underserved. We’ve seen people who have never been on an escalator hugging each other when they get to the top; it brings tears to your eyes. For ordinary people, this is changing their universe of the possible.”

The country’s first leisure-to-retail complex, Cosmos Yopougon features a Carrefour Market supermarket, a 700-seat three-screen Majestic Cinema, an innovative children’s learning and play area, a food court, 60 stores and 30 kiosks – all connected with help from state-of-the-art digital wayfinders. Ivorian Prime Minister Amadou Gon Coulibaly asked local leaders at the opening ceremony if they could have believed this would be possible just a few years ago. President Alassane Ouattara has sought to prevent any repeat of the civil wars of 2002 and 2011 through a restructuring of the army coupled with economic policies that include infrastructure projects and attracting international investors. The world’s fastest-growth economy in 2016, Côte d’Ivoire is forecast by the World Bank to have the fourth highest rate of real GDP growth this year and leads among nations recovering from serious conflict during the past decade.

Household consumption spending has shown double-digit annual growth since the last civil war ended, spurring retail sales rising in line with GDP. Yet, despite improved spending power, 46% of the population is below the poverty line, according to the African Development Bank. Most Ivorians now live in the larger cities, with urban residents increasing to more than half the population in the past decade.

“Our biggest satisfaction in the project came from the overwhelmingly positive response of locals to this totally new shopping experience,” said Mario Saradar, chairman and CEO of Saradar Capital Holding, which is parent of SFO Group, the lead global investor in the project. “The convenience combined with availability of such a wide spectrum of products and experiences is a first here.”

Having created over 500 construction jobs, Cosmos Yopougon brings a further 750 permanent positions, which in turn will directly sustain an estimated 938 new informal sector jobs – more than half of those for women and youths. The centre has actively sought to attract street vendors – who often struggle to cover their most basic needs – into the formal retail sector by offering leases inside the mall for as little as a month and smaller kiosks that don’t require the kit out and stock levels that shop units would. Demand for these kiosks has been triple the amount available, with artisans selling everything from artwork to local wines and teddy bears.

This push toward formal retail is meaningful in a country where most groceries are purchased on the streets and only 35% from supermarkets, according to Oxford Business Group. The issue comes down to a lack of investment in retail targeting lower to middle class households, says Cheick Sanankoua, the Abidjan-based co-founder of HC Capital Properties.

“The mistake a lot of investors make is to assume that because a person has less to spend, they do not distinguish quality; in fact, a person with only a dollar to spend is more demanding on how they spend it,” Sanankoua explains. “In the last five to ten years, Africa has seen a lot of new shopping centres in relatively affluent areas, but now we’re getting to the second wave which targets lower to middle income groups who are used to informal retail. Cosmos Yopougon is showing that malls can bring the informal economy into the formal retail sector.”

First-time formal retailers and low-cost stores such as ‘Bonus tout à 1000 franc’ that didn’t previously exist in Côte d’Ivoire mix with global brand leaders. Orange and MTN are seizing on the mall’s broad catchment area to drive their mobile money offerings, establishing their flagship stores for the country at Cosmos Yopougon. Carrefour Market has broadened its range of food to include items typically found in the street markets, such as local smoked fish and attiéké, an Ivorian staple made from fermented cassava pulp.

“Even though these are global brands, they are operating in a way that is much more integrated into the local economy rather than just importing goods, which also means lower prices,” said Sanankoua. “Cosmos Yopougon enables ordinary folk for the first time to access goods with the highest international quality and hygiene standards, using the best Ivorian and international experts, and catering to a fast-changing environment where consumers are rightly becoming more and more demanding. Through its deep understanding of the international real estate market and global network, SFO Group has been the ideal strategic partner that made it possible for us to prove this concept.”