The recent firing of the Nigerian Stock Exchange (NSE) CEO highlights a gradual move to a new standard of corporate governance in Nigeria – characterised by a slow chipping away at “old guard” business heavyweights. 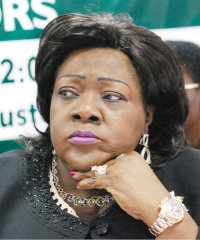 The corporate cleanup in the country, led by the financial sector, has taken quite a few important scalps over the past year. That of NSE chief Ndi Okereke-Onyuike, just months before her official retirement, was one more. As many of her counterparts in the financial sector were being swept away by the Central Bank of Nigeria, the questionable leadership of the country’s foremost financial institution lingered. For Nigerian business, the only surprise about the axing was that it took so long.

Okereke-Onyuike brought the exchange’s reputation into disrepute through ill-considered ventures outside the financial market. The most controversial was her chairmanship of Transcorp, an investment vehicle established in 2005 by leading Nigerian business people to leverage opportunities in Nigeria. It was regarded as a patronage vehicle for former president Olusegun Obasanjo, who was a driving force behind its creation.

When Transcorp listed in 2006, the NSE chief, as its chairwoman, became both player and referee, raising questions about her moral fitness to lead the exchange. The listing itself was controversial. For example, the company failed to meet the regulatory requirement of a five-year track record and its valuation was done solely on the credentials of its board members, most of them bank CEOs.

Nevertheless, more than 300,000 shareholders were signed up and the company made headlines with the size of its investments. These included bankrupt telecoms utility Nitel – which sane investors had studiously avoided. By 2010, Transcorp shares had lost more than 90% of their value.

Nigeria’s 2009 banking crisis was precipitated more by reckless bank lending for even more reckless speculation on the NSE, Africa’s second-biggest exchange after the JSE, than it was by the wider global crisis.

In the heady days preceding the global meltdown, Nigeria was awash with money. Recapitalised banks were soaking up money with unprecedented interest in their international rights offers. Concerns about regulation on the NSE were swept under the carpet as investors made obscene profits.

Following the global financial meltdown, money deserted the NSE. The all share index dropped nearly 46% in 2008 and a further 33% last year, with turnover down by over 70% last year.

The decline hit the financial sector, which has the biggest representation on the exchange, and the central bank moved in to rescue ailing banks with a $4bn bail-out last year.

The NSE’s president, food and cement mogul Aliko Dangote, was elected last year, despite allegations he had manipulated the shares of African Petroleum, a company belonging to his long-time foe, Nigerian oil industry billionaire Femi Atedola. Dangote’s election was nullified by the courts but he continued in the post awaiting an appeal. He recently claimed the NSE was bankrupt and that audits had been doctored to mask the crisis.

But Dangote (also on the Transcorp board), was given the boot by the regulator, along with Okereke-Onyuike and the NSE’s entire governing council.

The new CEO of the Securities Exchange Commission (SEC) had vowed, on taking up the post in January, to restore investor confidence to the exchange. The SEC pounced when Accenture, conducting the hunt for Okereke-Onyuike’s replacement ahead of her retirement, suspended work, claiming it had not been paid. The regulator cited concerns about inadequate oversight, continuing litigation concerning the presidency, governance challenges and failure to implement a succession plan.

Given the importance of investor confidence in capital markets, the latest events at the NSE are an obvious blow to Nigeria, which is spending heavily to celebrate 50 years of independence in October – also, ironically, the 50th anniversary of the NSE.

But the developments have been greeted with relief by the business community, despite the potential short- term reputation and trust issues.

The cleanup of the financial sector has been compromised by the dubious leadership of its premier institution.

The NSE is pivotal to the Nigerian economy and its demise would be a major setback to the country’s ambitions to become a global player. The washing of its dirty linen in public was necessary for the start of a new era for the exchange.