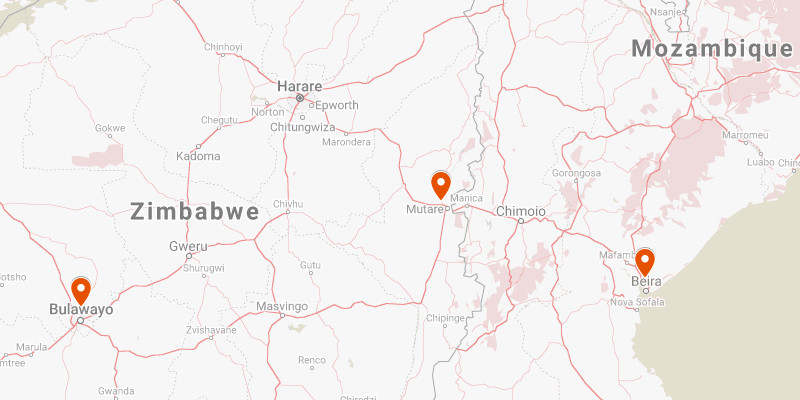 Map indicating the location of Mutare

For entrepreneurs with the required risk appetite, a good plan to find a local partner and a long-term view, the city of Mutare on the eastern border of Zimbabwe could provide interesting business opportunities.

“It is the closest point in the country to Beira,” says Gus Le Breton, CEO and co-founder of B’Ayoba, a Zimbabwean company producing, processing and marketing baobab products. This proximity (about 300km by road) to the port city in Mozambique provides opportunities for commerce and industry around the once vibrant Beira-Bulawayo corridor, Le Breton believes.

“We used to ship everything in and out through Beira,” he says. “Then during the Mozambican Civil War (1977 to 1992) trade started going through Durban (South Africa). But from Harare to Durban is a very long way.”

Mutare is the fourth largest city in Zimbabwe and the capital of the Manicaland province. It is connected by rail and road infrastructure to the capital city of Harare, only 260km away. Some of the larger Zimbabwean food producers have manufacturing plants in Mutare, such as Tanganda Tea and Cairns Foods Zimbabwe.

“It is a beautiful city in a beautiful location up in the mountains. Surrounded by lovely agricultural areas,” Le Breton says.

Whilst Zimbabwe’s economy has not justified spending much on the upgrading of the transport corridor, there has been investment into reinvigorating and rebuilding the route from neighbouring Mozambique. Last year, the Mozambican government announced the implementation of tolls on the newly rebuilt road that runs from Beira to the Zimbabwean border.

There is also some interest from foreign investors in the city. In January 2020, the Mutare City Council hosted a group of Chinese investors visiting Zimbabwe to promote the city’s drive to set up a special economic zone to boost industry and production. Fern Hill Township, in Mutare city, was declared a special economic zone in 2018. The business opportunities in Manicaland province highlighted by the Zimbabwe Special Economic Zones Authority (ZIMSEZA) are, amongst others: construction and rehabilitation of roads, dams, rail, air and power; diamond mining, cutting and polishing; farming with maize, potatoes and wheat; and agro-processing of fruits (citrus, avocados, bananas, macadamia nuts), coffee and tea.

The currency weakness and instability in Zimbabwe is a valid deterrent to investors, but Le Breton says the country has mostly moved back to dealing in US dollar.

“That would’ve been the main obstacle, but that is pretty much behind us now,” he says. “It is actually a great time to invest in Zimbabwe. You can find opportunities almost across the board. We’ve got so little and have so far to go.”