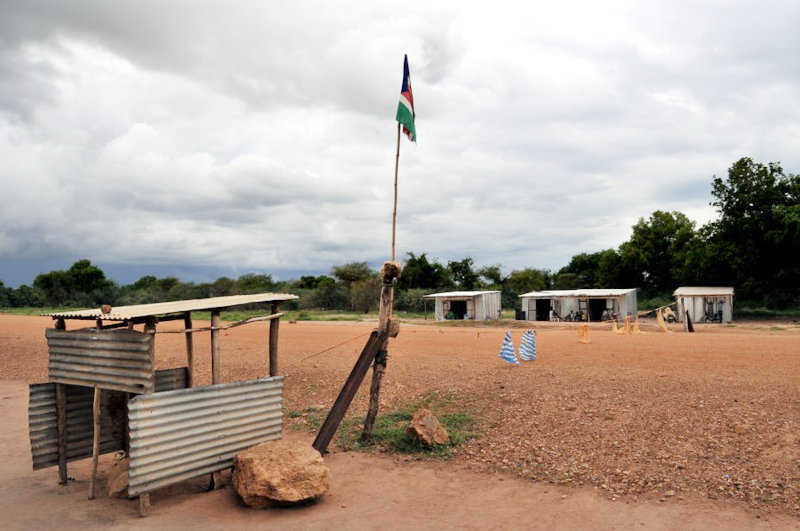 A checkpoint in rural South Sudan. This has been set up by government security forces. Photo by iStock /Getty Images Plus

When South Sudan became independent 10 years ago, oil revenues were supposed to fuel the economy of the world’s newest country. But shortly after, civil war resumed, oil prices plummeted, and the South Sudanese pound lost value.

While elites in Juba split the remaining oil revenues, ground-level civil servants, soldiers and rebels have to get by in other ways. They complement their absent or deflated salary through decentralised predation on long-distance trade. As a result, since independence in 2011, the number of checkpoints has nearly doubled and checkpoint taxes have increased by 300%. These ‘transit taxes’, as they are locally called, are mostly illegal. But in the absence of a functioning taxation system and as a legacy of decades of conflict, ‘government’ has become a financing enterprise, extracting cash from aid and trade. Indeed, any army deployment in practice is accompanied by setting up a checkpoint to feed the troops. Faced with a gun, transporters can do little else than pay up.

Over the past two years, we have mapped 319 checkpoints along major trade routes in South Sudan, of which 253 (79%) are roadblocks and 66 (21%) river checkpoints. 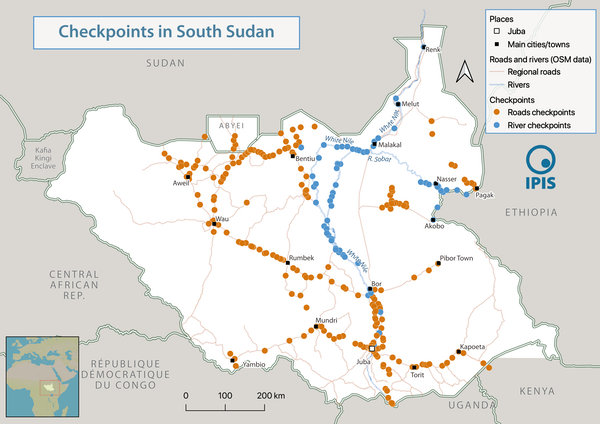 Examining these checkpoints is important because they sit at the heart of South Sudan’s war economy. Taxation is intimately related to state-building, and understanding how taxation works in practice therefore provides a unique window into the political economy of a country. For the South Sudanese government, allowing security services to engage in systematic illegal taxation is a cheap way of buying loyalty and gaining a weak but pervasive military presence along the country’s battered road network. But checkpoint taxes raise the price of aid delivery, make life expensive for poor South Sudanese, and stifle the domestic market for farming products.

The world’s most expensive roads

Based on averages, a typical checkpoint in South Sudan is manned by six people sharing three visible weapons among them, and levies about SSP 48,000 (US$80). But as vehicles typically travel long distances, total checkpoint taxes for a trip can be enormous.

Take the White Nile. Barges typically shuttle between Bor and Renk carrying around 300 to 400 metric tonnes of humanitarian aid or foodstuff. For the entire return journey each barge will pay about US$211 at each of the 33 checkpoints, totalling a stunning US$10,000 for a round trip.

Similarly, while checkpoints on the road between Juba and Bentiu on average charge a truck about US$21, the total journey involves passing 80 checkpoints – meaning a return journey easily costs over US$3,000 in checkpoint taxes. This makes transport in South Sudan among the most expensive in the world, with a price per metric tonne only rivalled by Afghanistan and the Democratic Republic of Congo.

Living off the road

On the one hand, checkpoints make for a practical way for soldiers and civil servants to complement their absent, delayed or inflated salaries. As one soldier explains, “We should be paid every month. The food we’re getting – you wouldn’t even eat it. We live in poor health. Most of us survive only from the transit taxes we enforce on traders.”

Soldiers like him earned a salary fixed in 2011 at SSP 1500, then worth about US$200. Today, that amount is only worth US$3. At every deployment, the first thing the army will do is raise a checkpoint to provide for subsistence. Explains one soldier, “I am happy here, as the daily collections I make here are far better than my salary. On a good day I can get US$25, while my monthly salary is US$3 and it doesn’t even come on time.”

However, a big part of the checkpoint profits is channelled upwards the chain of command in opaque ways. As one checkpoint commander explained, “As for us who runs a checkpoint, we don’t consume all the informal taxes alone, but give to our own superiors. And that happens weekly or we even visit them in the evenings at their residence and give them in order to retain your duty post.”

Like in other Central African countries, checkpoint commanders get to maintain lucrative posts if they reward their superiors with a cut of the money, who in turn have to pay their own superiors. In this way, checkpoints are a mechanism to transfer wealth from the commercial sector to politico-military elites, a symptom of a predatory war economy.

A side-effect of high checkpoint taxes is that it’s not profitable to sell agricultural products such as sorghum over long distances, stifling the domestic economy.

On the other hand, checkpoints are also a form of self-help for local government officials, in a context where those in the capital don’t redistribute the national budget to local government. We found county representatives autonomously mounting checkpoints to raise revenue from trade passing through their county, against the orders from Juba. While understandable, on a whole such strategies lead to a proliferation of checkpoints and ballooning of transport costs.

Humanitarian logistics makes up a big part of the transport sector in South Sudan, with aid agencies outsourcing food deliveries and other bulk transport to national or regional trucking companies. We found that these subcontractors are systematically taxed at 157, or 49%, of all South Sudanese checkpoints.

This means that scarce aid money is appropriated by South Sudan’s soldiers and rebels, ending up in the pockets of military elites. Locals in Juba often gist, ‘aid is the new oil’. Large volumes of humanitarian relief travelling overland may also constitute a factor driving the checkpoint phenomenon, as they constitute stable sources of revenue as well as flows of food that can be used strategically in struggles for control over people.

Early in 2021, the Dinka Jieng Council of Elders, a group that advocates for the rights of the Dinka community, stated that ‘corruption in South Sudan is the driver of political competition and hence the war’, fuelling fragmentation of elites as well as ground troops. The long-distance transport of bulk trade and aid, which because of the volumes involved represent concentrated wealth, sits at the heart of South Sudan’s militarised political economy.

Given South Sudan’s long history of conflict, it is likely that checkpoints are an endemic phenomenon, and that they will remain a key interface between international trade, aid and parties to conflict in the country.