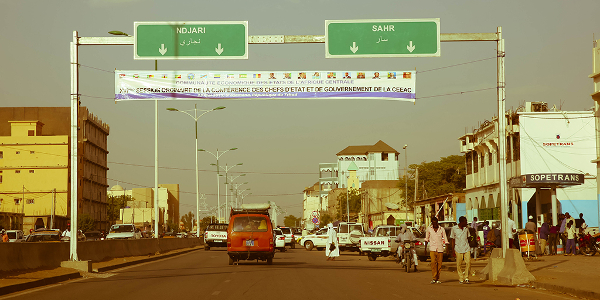 Economic activity has been paralysed in Chad and northern Cameroon following frequent Boko Haram attacks on trucks transporting goods from Nigeria’s Borno state to the two central African nations. During the latest attack, suspected Boko Haram members diverted three trucks transporting goods to Chad through Cameroon to an unknown destination. This marks a change of strategy after the terrorist group started targeting mosques in Cameroon.

Naffissa Adja, a sales agent at Arab supplies, one of the most popular shops in N’djamena, says she still waits to be paid last month’s salary, as the shop has not received supplies from Nigeria’s Borno state for several months.

She has not been paid because business is slow due to regular attacks on the shop’s supply trucks.

As the terrorists continue to control Nigerian villages, seizing goods and killing traders — especially around Borno state — business activity will continue to decline in Chad, Haman says, even with the heavy presence of the military along roads and markets.

Abdoul Said a customs official in Chad says three business establishments lost their trucks last Saturday to Boko Haram insurgents in the Nigerian town of Gambarou, which is separated from the Cameroonian town of Fotokol by a 500 metre-long bridge.

He says many vehicles have been attacked and seized by Boko Haram in the past two weeks. In the most recent attack, the insurgents drove three trucks loaded with goods destined for northern Cameroon and the Chadian capital, N’djamena, to an unknown destination, Said says.

Chad and northern Cameroon have supply routes originating from Maiduguri in northeastern Nigeria, which is the center of Borno state. The goods are brought in through Gambarou and then Fotokol on the Cameroonian side to Kousseri and N’Djamena in Chad.

Lawmaker Abba Kabbir of Cameroon’s national assembly says economic activity stagnates in northern Cameroon and Chad because the insurgents are still in control of supply routes from Nigeria.

He says if the border road linking Fotokol in Cameroon and Gambarou in Nigeria continues to be controlled by Boko Haram, economic activity will continue to be paralysed in Chad, northern Cameroon and parts of northeastern Nigeria. He says their plea is for the military to liberate the road from Boko Haram attacks.

Basic goods and manufactured items like portable phones, farming tools and spare parts for vehicles are imported to Chad along these routes.

After troops from Cameroon and Nigeria launched raids on Boko Haram strongholds and drastically reduced their firepower, the insurgents resorted to suicide bombings on mosques and hit and run attacks on trucks transporting goods.

Landlocked Chad and northern Cameroon also rely on maritime trade from the Cameroonian port of Douala on the Atlantic coast. But supply trucks are also regularly attacked in northern Cameroon by the insurgents

Chad today increasingly relies on its northern neighbour Sudan for supplies, but instability in Sudan’s western border and its spillover to Chad is destabilising both countries. – VOA