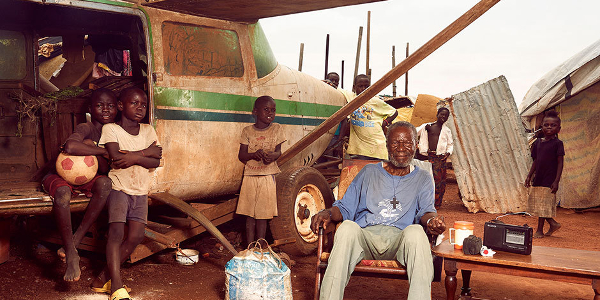 Roger Arnold Tabassé, 73, a former police inspector, is one of 30,000 people living in a camp for internally displaced people at M’Poko Airport. Photo: Stephan Gladieu/World Bank

The first thing you see when you land at Bangui’s M’Poko International Airport is miles and miles of makeshift shelters covered in plastic tarp, dangerously lined up along the landing strip. “A disaster waiting to happen if a plane misses the runway and catches fire,” in the words of an airport fire officer. Welcome to Camp M’Poko, home to 30,000 internally displaced people living in the backyard of a dilapidated airport.

In 2014, at the height of the political and sectarian crisis that devastated the Central African Republic and displaced one quarter of its population, the camp hosted up to 100,000 people. Formerly known as Bangui la Coquette, the capital city of Central African Republic has earned the sad nickname Bangui la Roquette – roughly, a change from “Bangui of Charms” to “Bangui of Bombs.” While recent presidential and legislative elections have brought three years of turmoil and transition to an end, blue helmets are still everywhere and outbursts of violence are frequent.

But for the first time in its history, the country has a democratically elected president and parliament. “As the Central African Republic emerges from one of the harshest and most costly crises in its history, the newly elected regime is facing immense challenges,” says Jean-Christophe Carret, the World Bank’s country manager. “On top of rebuilding the nation, the [government’s] primary challenge will be to ensure the restoration of security throughout the country, promote national reconciliation and take care of the internally displaced,” he says.

In a corner of Camp M’Poko, under the wing of a wrecked airplane, sits Roger Arnold Tabassé, 73, a former police inspector, who has known better days but retains his dignified demeanor. “My children forced me to move here for my own safety,” he says. “My home in the centre of Bangui was completely looted – the only thing left was a metal bed frame – and since I am sick and wear a catheter, they thought the camp was the best option. Today, I live here with my five children, my grandchildren and my wife, who, luckily for me, is a nurse,” he says. But Tabassé, like many people we met in the camp, is optimistic about the future of his country. “I really hope we can move forward,” he says.

A stiff price to pay

One of the poorest countries in the world, the Central African Republic, once famous for its diamonds and its self-proclaimed emperor, is embarking on a long path to recovery with the help of the World Bank and other development partners. Stabilisation spending reached US$1.35bn annually during the crisis, roughly equivalent to the CAR’s entire gross domestic product, including approximately $800m in support of MINUSCA (the UN peacekeeping mission) and $300m for the Sangaris (French peacekeeping forces). During these challenging times, the country also received $250m per year in humanitarian aid, an unparalleled amount of funding in a country so dependent on foreign aid that it’s sometimes known as the “Republic of NGOs.”

At the end of 2015, an estimated 450,000 individuals were internally displaced, and close to 500,000 were refugees in neighbouring countries. About 2.5 million people, more than half the country’s population, are in urgent need of humanitarian assistance, with more than 60% of the population regularly living in extreme poverty. The World Bank supported the crisis response with a $100m grant financed by the International Development Association (IDA), the World Bank’s fund for the poorest countries, and is currently working, alongside the United Nations and European Union, on a reconstruction conference for CAR. This will define the country’s priorities and needs, in order to support the recovery and peace process for the next five years.

One of the most effective measures implemented by donors during the crisis is a cash-for-work programme that provided temporary jobs to the most vulnerable people – including former combatants – in and around Bangui. Outside of Bangui, the World Bank, through its Londo (“Stand Up”) project, facilitated peacebuilding and stabilisation efforts by giving short-term employment to 8,500 men and women in 17 districts at a time when insecurity still prevailed.

“In a situation as difficult as this one, when you get help, it’s hard to measure the level of relief you feel. The project brought so much to the population in terms of quality of life and jobs, which was a breath of life to people who had been left to their own devices after the huge crisis the country had gone through,” said Jeannette Teya, the mayor of Bimbo, a city 15 miles from Bangui and the provincial capital of Ombella-M’Poko.

Facilitating the reinsertion of former combatants and the return of internally displaced people to their places of origin are top priorities for Jean-Christophe Carret these days. The World Bank is preparing a turn-around programme to support recovery and reconstruction efforts. As part of the stabilisation and national reconciliation process, special attention will be paid to youths who have been marginalised by society or mobilised by armed groups.

At Camp Beal, where 1,500 former rebels live in squalid conditions in the heart of Bangui – under the watch of UN peacekeepers, expectations are sky high. As one ex-combatant puts it: “First we came to seize power. Then we laid down our arms and agreed to be parked in this camp. Now we’re waiting for the DDR – Disarmament, Demobilisation and Reintegration – so we can get on with life, because we’ve been waiting for three years. If possible, I’d like to finish my studies, become a free and decent citizen, and more than anything, to put all this behind us.”

This article was originally published by the World Bank.