Forecast to grow at 8% per year over the next five years, Mozambique is benefiting from mineral wealth and infrastructure development following a 30-year civil war and from a favourable macroeconomic environment. 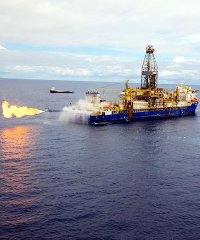 Recent offshore gas developments could nurture Mozambique’s hopes of becoming one of the largest liquefied natural gas exporters by 2020.

However, the southern African country has a very low GDP per capita (US$655). It is now facing the challenge of developing its wealth of natural resources, particularly the gas sector, so that this benefits the population at large and leads to sustainable growth.

From aid to FDI

Recovering from a brutal civil war in 1977-1992 following independence from Portugal in 1975, Mozambique has been on a robust growth path since the mid-1990s, averaging 7% GDP growth annually over the past ten years, one of the highest rates in the world.

Coal mining, investment in transport infrastructure and the development of the natural gas sector are expected to drive growth in the next years. Financial services and construction are also fast-growing sectors.

Foreign aid still contributes one-third of fiscal receipts but is expected to decline. This is partly due to donor countries’ budget austerity and concerns over governance in Mozambique. At the same time, the country has emerged as a major destination for foreign direct investment (FDI) in Africa (3rd highest in 2013), attracting over $5bn in 2012 and 2013, or around one-third of GDP. This is mostly because of huge coal deposits and offshore gas fields as well as infrastructure development. The country currently boasts around $32bn worth of infrastructure projects, largely to develop road and rail networks between the coal fields and the coast and to expand port facilities.

Indeed, transport has been a challenge for international companies operating in Mozambique, particularly with inadequate railway lines between the coal-rich northwestern province of Tete and Beira, the main port for coal exports. Brazil-based mining company Vale is investing in a $6.5bn terminal and 900-km railway line to link its coal operation in that province with the deep-water port of Nacala in the northeast of the country. It hopes to double its coal exports by 2015, up from 3m tonnes in 2012. A sharp increase in coal exports is forecast for the next few years, which should help to reduce the current account deficit.

At over 40% of GDP, Mozambique has a structurally high current account deficit which is due to major imports required for capital-intensive megaprojects in the mining and energy sectors. However, the deficit is largely financed by FDI and it is not expected to threaten macroeconomic stability. Coal is expected to take over from aluminium as the main export product in 2015 (27% vs 21% respectively, compared to 17% and 24% forecast for 2014). South Africa is Mozambique’s main trade partner by far (accounting for around one-third of both exports and imports). The EU, China and India are also major trade partners, with Portugal, and Brazil, continuing to have strong commercial, political and personal ties.

While gaining independence from aid, Mozambique is also incurring more expensive debt, although most of it is still largely on concessional terms. Public debt is forecast at 47% of GDP in 2014 (following 43% in 2013). The fiscal deficit is growing mostly due to investments in infrastructure required to develop the extractive industry but also due to election-related expenditure, an increase in the wage bill and expenses on maritime security.

Some volatility in a generally stable political environment

The dominant political force since Mozambique’s first democratic elections in 1994, the Front for the Liberation of Mozambique (Frelimo) is widely expected by observers to win the national elections in October. Filipe Nyussi, former defence minister and Frelimo’s presidential candidate, is set to succeed Armando Guebuza as state president. Clashes with supporters of the long-standing opposition party Renamo have led to numerous violent attacks since April 2013 but negotiations early this year have eased tensions. On May 23, long-time Renamo leader Afonso Dhlakama announced his intention to run for election, which may bode well for a peace dialogue.

Recent gas developments off the coast also nurture Mozambique’s hopes of becoming one of the largest liquefied natural gas exporters by 2020. The country’s geographic position and long coastline allow easy access to the rest of Africa and East Asia. Mozambique also has extensive sources of hydropower and vast arable land, mostly unused.

Will Mozambique be able to avoid the resource curse?

Popular discontent with robust growth not significantly benefiting the wider population is likely to be exacerbated by the minerals boom. Commercial development of the coal deposits and gas fields will more than double the country’s wealth, according to the World Bank, but rising exports from mining and, in a few years, natural gas could heighten the risk of low economic diversification, volatile revenues and Dutch disease.

Several aspects bode well for Mozambique, however. The government has an ambitious policy agenda, which includes tackling social issues as well as promoting FDI. It has introduced a five-year strategic plan to improve the business environment. The authorities have managed to frontload the benefits from gas discoveries in 2011-13, earning around $1.3bn in capital gains tax. Moreover, the manufacturing sector has grown significantly over the past few decades, and it represents 15% of GDP (as of 2011) vs e.g. 3% in Angola.

Mozambique has the opportunity to strengthen backward and forward linkages from the resource sector, particularly the natural gas and agricultural sectors – e.g. by developing the food, fertiliser and electricity industries.

The government has a good chance of finding the right balance between public investment and fiscal sustainability and between popular expectations and investors’ interest. If Mozambique manages to invest a higher share of its natural resources income on both human and physical capital, its future is promising even if progress on improving the business environment, infrastructure and government efficiency is likely to be slow.

Dr Claire Schaffnit-Chatterjee is a senior analyst at Deutsche Bank