As oil prices dipped below US$50 a barrel in January, Nigeria’s finance minister put a brave face on her country’s revenue crisis. Nigerians, she said, should start thinking of Africa’s largest oil producer as a “non-oil country”. 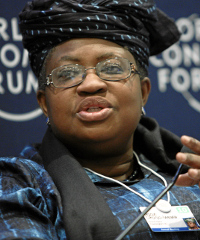 Ngozi Okonjo-Iweala’s call was an appeal to prioritise other, less volatile sectors to drive growth and reduce the country’s reliance on oil, a commodity that has dominated the Nigerian economy for decades with little to show for it.

Like other oil-dependent economies, Nigeria bases its budget on the benchmark price per barrel of oil. Last year, Nigeria optimistically moved the benchmark price from $77.50 to $65 in the hope that this would rescue the 2015-2017 Medium Term Expenditure Framework. But shortly afterwards, policy makers looked on with dismay as prices plummeted below the new yardstick to hit nadirs last seen in 2009.

Okonjo-Iweala seems confident that Nigeria can contain the damage without lowering the benchmark price again. She has introduced measures such as travel restrictions on officials and high import surcharges on luxury goods to stabilise revenues. Despite its new designation as Africa’s largest economy, times are tough. Nigeria has spent millions on a costly presidential election; the de facto civil war raging in the north-east is burning revenues; and about $6bn vanishes each year to oil theft, just part of the billions of dollars that go missing or are stolen annually from the fiscus.

Angola, Africa’s second-largest oil producer, is also grappling with the shock to its oil-dependent economy. It has proposed lowering its benchmark to $40 a barrel for the 2015 budget from $98 in 2014, reducing fuel subsidies, cutting expenditure and shelving new projects.

Other petro-states such as Gabon and Republic of Congo are reeling, too. Ghana, the newest oil producer in Africa, based its 2015 budget on an oil price of nearly $100 a barrel and has had to revise its spending plan.

Oil producers are also facing other fallouts from the oil price drop, including significant currency depreciation, with central banks using precious reserves to defend currencies. This, in turn, means less available foreign currency, a factor that may deter new investment.

Oil producers are not the only ones who have been hurt by the more than 50% drop in the petroleum price since June 2014, when oil was at $112 a barrel. The sharp downward price cycle has negative implications for the continent, considered the new energy frontier after six of the ten largest oil and gas discoveries were made in Africa in 2013. As they wait out this phase, oil companies are revising projects, putting on hold some of the billions of dollars for new exploration and production that had been earmarked for Africa over the next decade.

Analysts are not confident of a quick price turnaround given that underlying factors – excess production driven by the US shale gas revolution coupled with declining growth in significant markets, particularly China – are likely to endure for some time. The World Bank has estimated that oil prices will be, on average, 30% lower this year than in 2014.

The current situation makes it clear that African governments are not managing their resource wealth wisely. The shock to commodity-dependent economies in 2008 was clearly not enough of a reality check for policy makers to make painful choices for long-term sustainability.

Africa’s new oil and gas producers are looking at models to help them avoid the resource curse, which happens when resources attract exploitation by foreigners, stimulate corruption among the governing elite and trigger the currency to rise, making local products more expensive. Nigeria has become the example of how not to do it, with Norway a popular model for successful state control of natural resources.

Critical factors in Norway’s success are missing in Africa, most importantly the existence of strong democratic institutions. Despite political will to build successful oil states, it is doubtful that politicians can fulfill the model’s commitment to revenue transparency, diversified long-term investment and public accountability.

Nigeria’s main savings mechanism, the Excess Crude Account, captures funds above a targeted price per barrel of oil. It has acted both as a cushion against economic shocks in the past and a tool for economic benefits. But too often it has been raided for short-term recurrent expenditure such as augmenting monthly revenue shortfalls for state and local governments, many of which spend more than their allocations from the federal authorities in Abuja, the capital.

The fund’s reserves dropped from $9bn in 2012 to just above $4bn, despite high oil prices over most of the period, Okonjo-Iweala said at a conference in November 2014. Ring-fencing these dedicated funds from ongoing recurrent expenditure is essential if they are to support state revenues in times of budgetary stress and for critical development spending such as building infrastructure.

But the benefits depend on states investing these gains prudently rather than hiking imports, as South Africa has done. In October 2014, this country’s crude imports jumped by more than 70% from the month before as importers exploited the plunging prices.

Despite significant improvements in macroeconomic management, African governments still base their policies more on political expediency and short-term spending than on building sustainable economies. States could cut back on public service wages, which often soak up a sizeable chunk of government budgets.

By reducing this recurrent expenditure, they could rely less on borrowing to build infrastructure, for instance. In addition to domestic debt, many have turned to international capital markets. In 2014 alone, African countries raised at least $7bn in sovereign bond issues, according to the IMF. But yields are rising, making debt repayments onerous.

Savings rates in most of sub-Saharan Africa are relatively low, averaging about 20% of GDP, according to the IMF. In South Africa, the continent’s most sophisticated economy, the estimated national gross savings rate in 2014 was 14.1% of GDP, compared to more than 30% in other developing markets such as India and China.

African countries should focus on financing more of their development needs from domestic sources because this would give them more flexibility in advancing and implementing policies.

Building the private sector is the most efficient way to diversify domestic revenues. However, African governments are often suspicious of private investment even while courting it. Too often, they overregulate and constrain companies, inefficiencies that discourage business.

Despite the challenges, many states now have more skills to handle crises than they had a decade ago. As the continent becomes more stable politically and investor-friendly, capital flows are becoming more diverse. Aid is declining while other revenue streams – remittances, foreign direct investment and private equity – are rising.

Leveraging internal wealth, such as pension funds, is another way of funding development. The amounts are significant, worth $260bn in 2010 and estimated to rise to $622bn by 2020, according to consulting firm McKinsey. The indigenous private sector is now investing in local assets rather than stashing capital abroad.

The crashing oil price may be a blessing in disguise for African countries. It gives them an opportunity to develop other revenue sources, manage budgets prudently and to make smart long-term investments in the future.

This article was produced by Good Governance Africa.